And now from the inspiring to the disquieting.  Last week NASA announced the latest numbers in sea level rise: 3 millimeters a year (or 0.13 inches a year) – but let’s remember, scientists always lowball predictions that involve global warming because they don’t want to get fired or lose their government-sourced funding.  They’ve done it for years and end up saying contrite crap like, “Gee, we underestimated the rate again.  Swim as fast as you can to the crumbling shore!” 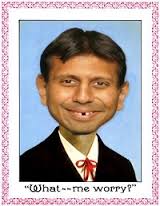 And as usual, despite the in-your-face indisputable mathematics, politicians whose hands are freshly greased from the greenhouse gas belching Big Oil/Fracking and Big Coal industries go nut-up when terms like “global warming” are used.  Such is the case of Louisiana Governor and Republican presidential contender Bobby Jindal, when he sent a letter to President Obama earlier in August just before Obama’s visit to New Orleans for the tenth anniversary of the Katrina disaster.  In the letter, Jindal begged Obama to not use the term “climate change” in his public addresses, since that’s just a hoax, y’all know.  “There is a time and a place for politics, but this is not it,” Jindal wrote.

Luckily, Obama ignored the “advice,” and gave an impressive speech about the urgent 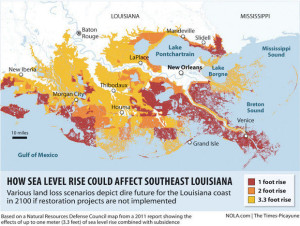 need to address global warming.  NASA, in its report, also mentioned that Louisiana’s “Master Plan” for reinforcing the state levee system, particularly in New Orleans, is woefully inadequate … especially for what’s to come.

To sign a petition to save Louisiana’s landscape and to fight climate change causing sea level to rise, go to: http://www.thepetitionsite.com/625/124/077/save-louisiana-landscape-fight-climate-change-that-causes-sea-levels-to-rise/