The first time I met John Dobson, he woke me up by pulling on my leg in the middle of the night in a small tent next to the Grand Canyon…. ”You must come see the rings of Saturn,” he implored.  That was around 1973, I think.  “You can sleep anytime, you must see the rings,” Dobson urged as I stumbled outside my humble shelter and adjusted my eyes from sleep to gaze through brightly-colored telescopes operated by an animated, ponytailed Dobson decked in baggy, hand-me-downs over his small frame. His aged yellow school bus, which was parked nearby and adorned with the words, “San Francisco Sidewalk Astronomers,” contributed to the party atmosphere of star-struck devotees being egged on by this Ken Kesey of the cosmological world. 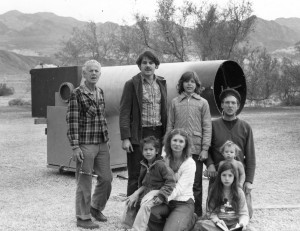 Death Valley 1981 – John Dobson, far left standing and the author to his right. The “cannon” in the background is a 24.5″ Dobsonian John built in the late 60’s named “Delphinium” and was the largest portable telescope on the planet. Dobson’s son Loren is on the middle right.

While many are familiar with Dobson’s legacy as the godfather of modern amateur astronomy, few are aware of his contribution to 20th Century cosmology and his quixotic battle against that discipline’s present day  sacred cow – the Big Bang model of the universe. “The universe is mostly made up of hydrogen and ignorance,” Dobson once quipped on camera.   He would complain that the Big Bang had “too many problems” (i.e., everything created out of nothing), and that cosmologists now change the physics to match the model instead of changing the model to match the physics.(1)

Dobson’s own “pastoral” view of the cosmos envisioned a  recycled,  bounded system. “If the stuff recycles from the border [of the universe], we don’t have to have a beginning. It could be going like this all the time,” he explained. “The whole universe is alive,” he preached, adding that “since the Universe is made out of energy, it cannot have arisen by transformation, except from energy. It cannot arise from nothing. ” (2)

Fortunately for Dobson, he was not alone in his rage against the machine of entrenched scientific thinking. His cosmology had a coincidental and simultaneous connection to the work of American Astronomer Halton C. Arp, who like Dob 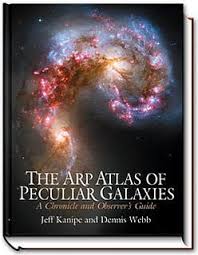 son had no love lost for the Big Bang theory, which he said could not account for abnormalities he observed in quasars and galaxies.  Both Dobson and Arp came to the conclusion that gravitational redshift as Dobson would say, “falls all over the paper,” and was no longer accurate in determining the distance and velocity of galaxies and stars.  (Before one quickly dismisses these arguments, it’s good to remember I’m not talking about lightweight guys – Dobson has an internationally marketed telescope named after him, and Arp,who published the seminal Atlas of Peculiar Galaxies in 1966,  was a personal assistant to Sir Edwin Hubble!) 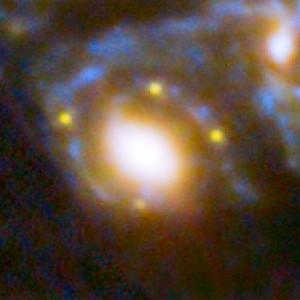 These two old lions of astronomy cast a leery eye on Hubble’s redshift observation that galaxies from all directions appear to be moving, or expanding away, from us. Redshift, for those who might think it’s some kind of party dress, is the main cornerstone of how cosmologists measure the age of a Big Bang universe in which the displacement of known spectral lines moves towards the red-end of a galaxy’s visible spectrum.  (This is similar to the Doppler Effect in which a police siren rises in pitch as it approaches you and lowers in pitch as the sound trails away). This redshift idea was suggested by Hubble to explain why galaxies and stars seem to be moving away from us, forming an infinitely expanding cosmic balloon. Little did Hubble know that his musings would become commandments.  This process is still referred to as the Hubble Constant or Hubble’s Law.  Arp said that Hubble himself was not convinced that he even had it right, that maybe they were misunderstanding the interpretation of the redshift altogether. In fact, it has been argued that if Hubble had first seen the plots for quasars, he and other astronomers would never have concluded that the universe was expanding. 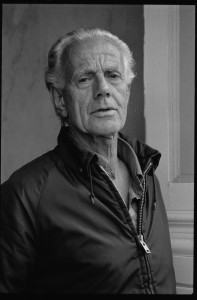 Dobson himself, who had the opportunity to show the granddaddy of Quantum Mechanics Werner Heisenberg (3) some stellar wonders through his homemade telescope back in the day,  also attempted to convince Stephen Hawking that cosmological “flies in the ointment” existed. Asking the revered physicist about the possibility of whether a “pre-geometry” could have existed instead of “nothing” (as the Big bangers maintain), a confused Hawking replied “I’m not sure it’s a meaningful question.”

It’s interesting to note that when Arp tried to publish and explain redshift anomalies in a paper submitted to the The Astronomical Journal back in 1977,  the editor at the time, Chandrasekhar, rejected the paper — un-refereed, like a professional ballgame having no umpire — scribbling in the left hand corner to this work of genius, “This is beyond my imagination.”  (Editor’s Note:  Probably beyond his small-mindedness, as well…)

They eventually gave Chandrasekhar the Nobel Prize and Arp a mop and a bucket.

“It is embarrassing, and by now a little boring, to constantly read announcements about ever more distant and luminous high redshift objects, blacker holes and higher and higher percentages of undetectable matter. (Past 90% it begins to make observations irrelevant.)”
Halton C. Arp 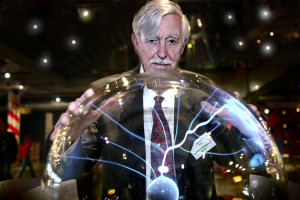 Arp’s revolutionary discovery of the cosmos was one in which high redshift objects that should be rapidly receding away are surprisingly next to low redshift celestial bodies closer to us . While this unconventional view of the universe threw the baby out with the bathwater on the established orthodoxy that redshift meant ‘fast and far away’  or recessional velocity, it did little to alter the minds of those clinging to older edicts believed to be carved in stone.  The academic world which Arp had so much disdain for, and ironically was a part of, just dragged the redshift baby back in, washed it off, gave it another name.  After all, Arp’s observations, if correct, would have pulverized the foundations on which most modern cosmology was built.  The mainstream scientific community was not going to stand for that in the same way the Church of the 17th century would not stand for Galileo’s observations and scientific inquiry.  Consequently, the modern-day high priests took Arp’s telescopes away and refused to have him published.(4)  Ultimately, the scientific powers that be conveniently forgot about Arp’s Discordant Redshift theories, blackballed him from major observatory access, belched fire out of their mouths and said “The Big Bang has spoken,” and went on teaching the same old flawed cosmology to a generation of scientists who never even bothered to ask who the man behind the curtain was.(5)

Arp probably could see the irony of it all; he just took it like Stan Laurel, staring down at his shoelaces being once again chided by Oliver Hardy, “Well Stanley this is another fine mess you have gotten us into ,,, Now we’ll be lucky if they let us look through a pair of binoculars.”

“It is sometimes said that nothing is known from astronomy which goes outside the range of currently known physics…if one accepts…the origin of the universe at some moment in time.  Then it is the phenomenon of ‘origin,’ which lies outside currently-known physics.”
Fred Hoyle – British Astronomer who coined the term, “Big Bang”

This did not slow Arp down, however, as he turned to lesser known foreign observatories and amateur astronomers — once even getting a shot at Hubble Telescope “viewing” from a government ‘blue light special’ allowing 10% of time on Hubble out to amateur astronomers.  One lucky winner was a student of Arp’s and aimed the scope at Stephan’s Quintet (above) at Arp’s request. (I believe the powers that be got wind of that little subterfuge and NASA cancelled the whole amateur hour!) 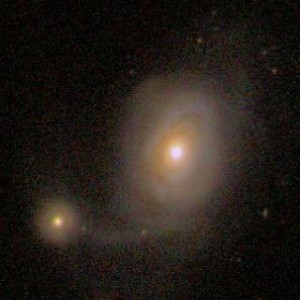 Bridge Over Hubble Water: Galaxy NGC 7603 clearly connected to its smaller companion galaxy NGC 7603B via a curved bridge of matter.

Despite these professional road blocks, Arp was able to determine that celestial bodies such as  Quasi Stellar Objects (QSOs) are not extremely distant high-redshifted objects as believed, but that they are in fact coming out of the nucleus of a nearby parent galaxy causing excited hydrogen filaments connecting these two objects comprised of vastly different redshifts.  Arp eventually found hundreds of these examples (see NGC 7603 to the right). (6).

Arp rejected the widely-held thought that observable phenomena such as Einstein’s Cross (see below) was a product of “gravitational lensing” in which one object appeared to be many instead of multiple objects (in this case quasars) surrounding a galaxy.  In fact,  British Astronomer Fred Hoyle, a leading critic of the Big Bang and an early proponent of a “Steady State” universe, computed the probability of such a lensing event to be less than two chances in a million.  In fact, Einstein’s Cross is just one in many instances where pairs and multiple quasars are associated with hundreds of low redshift galaxies, and taken as a whole, the chance of these occurring by pure coincidence (something the big bangers claim) Hoyle said would have exceeded one in a billion.  At the time Hoyle crunched these numbers, Arp was studying approximately 190 QSO’s, and decades later in 2010, The Royal Observatory in Edinburgh examined a survey of over 900 QSO’s, and found nothing contradicting Arp’s “Discordant Redshift Theory,” also now referred to as “Redshift Quantization.” In the meantime, NASA and the rest of the scientific community have accepted redshift as gospel, and have calculated these (or should I say ‘the’) quasars at more than a billion light years further away 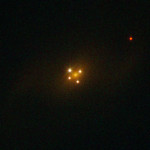 Einstein’s Cross (above): You will be lucky to find any explanation of these Quasars from any scientific source other than they were “gravitationally lensed,” a fact Halton Arp disproved ages ago. – Tom Chargin

Meanwhile, John Dobson, who to the end (7) tirelessly defended Arp’s findings regarding what he thought were absurd assumptions on the part of Big Bang cheerleaders, would often say,

Little did these two gentlemen realize the can of worms they had opened.

(1) Quotes from “A Sidewalk Astronomer,” a film by Jeffery Fox Jacobs, www.telescopepictures.com.

(3) Heisenberg, as in “Heisenberg’s Principle of Uncertainty,” was a major cosmological figure, friend and contemporary of Albert Einstein, as well as one of the main fathers that ushered in the era of Quantum Mechanics

(4) Arp  was rejected again and again, by prestigious scientific journals across the board.  Nonetheless, he was eventually published, but not after many “illegal motion” calls by editorial referees who determine which ‘ideas and data’  get to play in the big game, i,e. published in journals like Nature and The Astronomical Journal.

(5) Arp was banned from using most large telescopes including Palomar and Mt. Wilson where he was once a staff researcher.

(6) Sources: Seeing Red, and Quasars, Redshifts and Controversies, both written by H. Arp.

(7) Both Dobson and Arp passed away just weeks apart from each other in 2014 and 2013 respectively.

One thought on “Event Horizon Part 1”