In honor of the 46th Earth Day this Friday, Galactic Sandbox is providing a brief “roundup” of recent news events as they relate to humankind’s not so gentle treatment of our home planet: 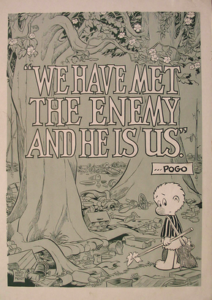 The Good (sort of) 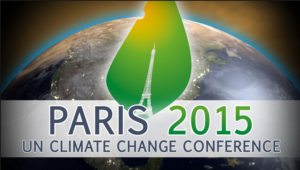 With an overwhelming number of  nations ready to get on board, the 2015 Paris climate accord could come into force as early as 2018, or two years ahead  of schedule, says United Nations’ climate chief Christiana Figueres, who caustically adds that the agreement is 10 years too late. Dignitaries representing at least 120 states from around the globe are expected to be on hand to sign the deal this Friday in New York. Last December’s Paris pledge called for at least 55 countries representing 55 percent of the world’s greenhouse gas emissions for the agreement to become effective. 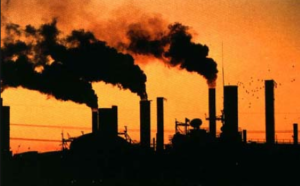 Ick! Recently disclosed documents show that oil companies started scrambling for cover as early as 1946 in response to public concerns about smog in cities like Los Angeles, leading to the formation of the “Smoke and Fumes Committee.”

Newly-released documents from the US oil industry show, among other things, how much American oil corporations knew about the dangers of fossil fuel-based carbon emissions, including a 1968 report to the American Petroleum Institute (API) urging more research into reducing carbon footprints. “There are numerous points along this path where the industry was on notice that this was a rising risk,” said Carroll Muffett, president of the Center for International Environmental Law that disclosed the documents. “Your have two paths in front of you. One is to respond to this rising risk, notwithstanding the continuing uncertainty, or the alternative is to try to discredit the science. An I think history has shown what path they chose.”

Other tidbits from the recent document dump include evidence that as far back as 1957, Humble Oil researchers labeled fossil fuels as a culprit in the rise of carbon dioxide concentrations in the atmosphere, reports Vice.  Also in 1968, a chief meteorologist at the Stanford Research Institute (which had close ties to the oil industry) warned that rising carbon dioxide concentrations in the atmosphere “may be the cause of serious world-wide environmental changes.” 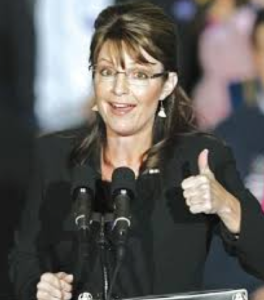 Sarah “Not a Slave to Science” Palin

Sarah Palin turned up last week in Washington DC to pick up a check from, presumably, climate change-denying lobbyists, as she spoke out against the scientific community for its near-unanimous consensus on the alarming changes in the Earth’s ecosystems, according to Salon. Attending the premiere on Capital Hill for the green-bashing film “Climate Hustle”  – hosted by none other than Tin Foil Hat-adorned Congressman Lamar Smith! – the ultra-conservative gadfly picked on one of America’s most recognizable “scientists,” Bill Nye, who is interviewed in the documentary. “Bill Nye is as much as scientist as I am,” Palin quacked. “He’s a kids’ show actor; he’s not a scientist,” she “reasoned,” then accused the Cornell-educated Nye for using his “Science Guy” persona to harm children by warning them that climate change is real and man made.

Commenting on one of the many news stories covering Palin’s remarks, guy-from-the-blogosphere James Tshimanga said it best: “To be fair, like Bill Nye who is excellent at making his passion accessible and understandable by children to light the fires of imagination, Sara Palin excels at bringing her message to adults with child-like minds to light the fires of ignorance. From that [perspective] she does have a point.” 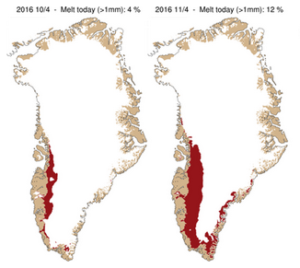 Scientists have observed that Greenland’s massive ice sheet has started thawing “freakishly” early, with about 12 percent of the frozen surface area (656,000 square miles) showing signs of melting ice — a condition that’s normal for late May not mid-April. “it’s disturbing, said Peter Langen, a climate scientist at the Danish Meteorological Institute that reported the numbers. “Something like this wipes out all kinds of records … this could be a sign of things we’re going to see more often in the future,” he added. a weather system bringing above-freezing temperatures to Greenland and funneling warmer-than-usual rain from the south is cited as the case for the early ice thaw.  While Langen and other scientists say this is part of a natural weather system, other researchers are warning that man-made climate change is making the cycles more acute. “Things are getting more extreme and they’re getting more common,” said NASA ice expert Walt Meier. “This kind of freakish warm spell is another piece in the puzzle. One freakish thing every once in a while you might expect. But we’re getting these things more often and that’s an indication of climate change.” Meier added.

We couldn’t have wrapped this up better than New Yorker reporter Andy Borowitz in his 2014 article, “Scientists Consider New Names for Climate Change.” Hopefully, the venerable publication forgives us for reprinting Mr. Borowitz’s piece in its entirety:

NEW HAVEN (The Borowitz Report)—After a report from the Yale Center on Climate Change Communication showed that the term “climate change” elicits relatively little concern from the American public, leading scientists are recommending replacing it with a new term: “You will be burnt to a crisp and die.”

Other terms under consideration by the scientists include “your cities will be ravaged by tsunamis and floods” and “earth will be a fiery hellhole incapable of supporting human life.”

Scientists were generally supportive of the suggestions, with many favoring the term “your future will involve rowing a boat down a river of rotting corpses.”

“Any of these terms would do a better job conveying the urgency of the problem,” Tracy Klugian, a spokesperson for the newly renamed Yale Center for Oh My God Wake Up You Assholes, said. 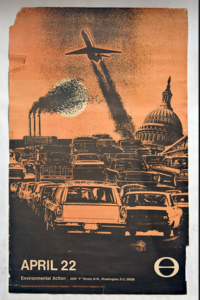 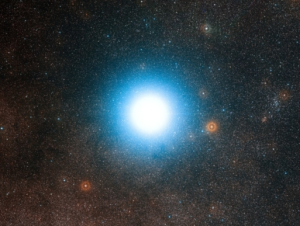 Our Sun’s nearest neighbor, Alpha Centauri, is one of the first destinations of laser-powered nanocraft that will perform flybys of such interstellar targets.

Want to get away – really get away? The newest chapter in the ongoing “Tycoons to the Stars” saga has begun, as Russian gazillionaire and tech entrepreneur Yuri Miilner announced last week his $100 million research program sending robotic probes to nearby solar systems at breakneck speeds of 20 years. Unlike fellow first-generation fat cats Elon Musk, Jeff Bezos, and Richard Branson who are leveraging the final frontier as a means to expand their own empires, Milner appears to be more interested broadening the horizon of humankind’s understanding of  and place in the cosmos with earlier privately-funded multidisciplinary efforts to search more than a million stars and a hundred galaxies for alien civilizations as well as sending interstellar broadcasts to extraterrestrials tuned into the same wavelengths. 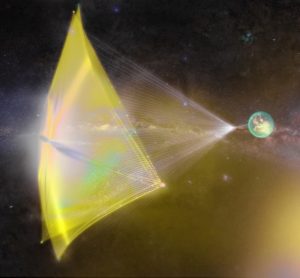 Flanked by A-lister eggheads including Stephen Hawking and Facebook CEO Mark Zuckerberg (both of whom will serve as board members), Milner unveiled his newest “Breakthrough Starshot” endeavor that will attempt to send tiny nanocraft packed with ridiculously small cameras, sensors, thrusters, and communications equipment into interstellar space at relativistic speeds (20 percent the speed of light) with the initial help of land-based laser arrays capable of beaming 100-gigawatt laser pulses through the atmosphere to the star-bound crafts’ atomically-thin “light sails.” “The human story is one of great leaps,” Milner said in a statement released shortly before the announcement. “55 years ago today, Yuri Gagarin became the first human in space. Today, we are preparing for the next great leap—to the stars.” At the announcement, Hawking added that “Without new methods of propulsion we simply cannot get very far. Light is the most pragmatic technology available.” 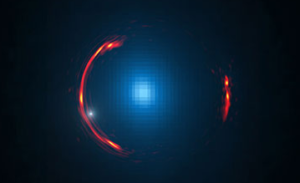 Researchers studying test images taken by the Atacama Large Milimeter/submilimeter Array (ALMA) in 2014 have found the telltale signs that a dwarf dark galaxy is hidden in the gravitational lens of a much larger galaxy 4 billion light-years away. According to a new study by  astronomer Yashar Hezaveh of Stanford University, this new discovery could lead the way for the detection of many more such mini-me galaxies, as well as assist in the understanding of dark matter that makes up 80 percent of the Universe’s mass and is only “observable” by its gravitational influence, as evidenced in the lensing phenomena captured by ALMA. Hezaveh’s study suggests that the majority of dwarf galaxies (many of which have been predicted to exist near our own Milky Way) are impossible to find by conventional means because they are primarily composed of dark matter and emit little if any light. 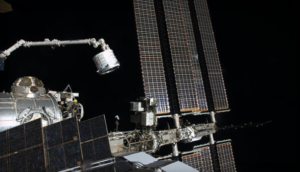 Inflatable BEAM habitat being secured to the International Space Station.

The recently-launched inflatable space station crew compartment has been secured in place to the space lab’s “Tranquility” module in preparation of two years of testing. The Bigelow Expandable activity Module (BEAM) will be inflated on May 27, resulting in a bedroom-sized studio measuring 10.5 feet wide by 13-feet long. Over the next twenty four months, sensors aboard BEAM will monitor temperature, pressure, and radiation levels to determine the inflatable cabin’s space worthiness for future crew habitats for short and long missions. 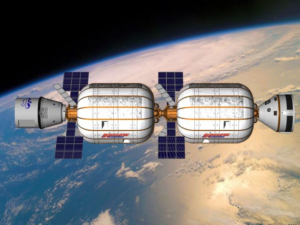 Bigelow Aerospace’s B330 expandable space habitat will have 12,000 cu/ft of leg room, and will be designed as a zero-gravity research facility, a space tourism destination, and housing for future Moon and Mars exploration.

Bigelow Aerospace, maker of the newly-docked BEAM inflatable space station alcove, is also thinking about partnering with other firms who would sponsor the cosmic hot air balloons for any number of commercial enterprises from space tourism (for the rich an famous to spend a week in low Earth orbit) to private research faciliites.  In fact, according to Ars Technica, Robert Bigalow, the hotel impressario who founded Bigelow Aerospace, calls the expandable habitats “time shares.”  “We would love to see Disney have a Disney space station,” he was quoted as saying.