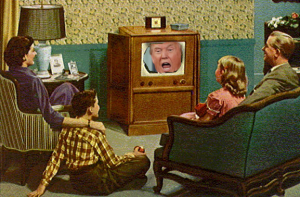 While the world morbidly dwells on Donald Trump’s hourly gaffes – as if his psychotic verbal outbursts were global turning points in civilization’s history — the world as we know it is changing dramatically, and not for the better. And yet at the top of the news hour, the social network-infused media and twitterdom would have us rapt with slack-jawed fascination on The Donald’s latest unfiltered “telling it like it is” thought farts; and right on cue we consume these vacuously, as if we were mindlessly eating family-sized bags of potato chips while impassively watching a train wreck in slow motion. 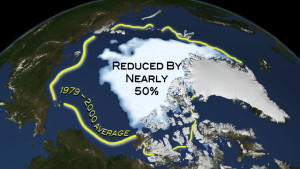 Through this thick orange haze, one alarming, infinitely more significant news item competing for brain cell time with the general public is that Earth scientists have cranked up the urgency in their message that the Arctic is melting at an exponential rate. In just the last year, we’ve lost 5,000 square miles of what was once “permanent” ice in the northern polar region – an area the size of Connecticut. Greenland is actually becoming green, and quite smaller, says NASA oceanographer Dr. Carlos Del Castillo, who warns that man-made greenhouse gasses have added 10 warm Fahrenheit degrees during what is supposed to be the region’s winter. (Note to self if I were Congressman Lamar Smith: that quack Del Castillo needs to answer some hard questions in a grilling at next Science Committee meeting!) 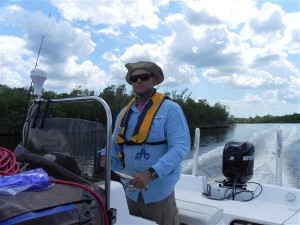 “What happens in the Arctic does not stay in the Arctic,” Del Castillo warned in an interview with NBC. He is particularly worried about people living in coastal areas around the world as sea levels are rising much faster than previously calculated. He cites the Florida Everglades, saying the ecosystem will be inundated into a sea instead of a marshland, sooner than later. Ultimately, this shutdown of the world’s ocean currents will cause temperatures to plummet – after mega storms and heat waves ravage the Earth. Extreme heat, and then a deep freeze turning our planet into a snowball is an impending fate that extreme right politicians cannot fathom. The idea of picturing the future more than five minutes ahead of their latest paycheck from fossil fuel lobbyists is very difficult for them.

Oh and by the way, the southern Antarctic is calving ice flows like mad as well, 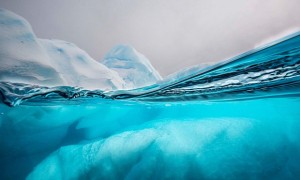 contributing to the sudden outpouring of billions of tons of fresh water that is slowing down the ocean’s jet stream. And as previously mentioned, if we lose the planet’s conveyor belt of warm air and water, we are quite screwed. Scientists constantly moving up the Doomsday timeline are now saying the sea levels will rise several feet in just a matter of decades, not centuries. 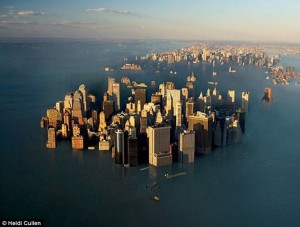 If we continue to burn fossil fuels at the current rate (not to mention continuing the frantic growth of big agriculture and animal husbandry), the melting of Greenland and Antarctica will raise the sea levels between 80 to 170 more feet. Note: In case you’re wondering, I didn’t yank that out of my ass like The Donald does with his (Trump’s take on climate change: “It’s a hoax perpetuated by the Chinese”), rather, that’s the conclusion of the latest NASA study on the subject. And despite the threats from GOP “leaders” who will say and do anything to get re-elected, NASA has announced it is sending Earth scientists to every corner of the planet to monitor the climate changing crisis. 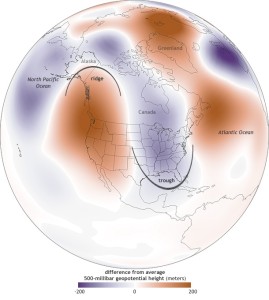 2014 Temperature extremes: The deep trough pours cold, Arctic air, while the “ridge” where the jet stream says high in the Arctic allows warmer air in the south to stagnate. (Graphic NOAA/Rebecca Lindsey)

I have always suspected that the numbers on the global warming catastrophe were low-balled, since scientists have to be so very gingerly in their predictions lest they face defunding by the gerrymandered Republican Congress.  At the same time these dedicated researchers have to bear the brunt of Congressman Lamar Smith’s (R-seceded Texas) inquisitional witch-hunting against Earth scientists since he is the gavel-gripper on the House Science and Space Committee who’s confident that this so-called global warning guff is a farce because he had to put on a wooly sweater last winter. (But Hey! Telling it like it is!)

And yet, it’s no surprise that the public at large is as flaccid as the future illiterate survivors of H.G. Wells’ “The Time Machine,” blankly walking to our endgame of a cooking pot, like cattle to slaughter so that the troglodyte Morlocks can retain their family values at the dinner table. 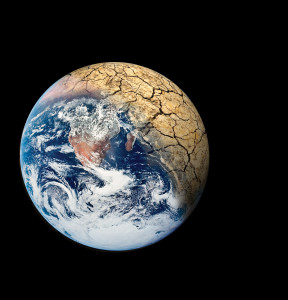 Cooking pot indeed. While the Trump fans may say they love this year-round balmy weather, I wonder if they will still feel that way when it becomes as hot as a summer noon in Death Valley while it’s really a June midnight in North Dakota…oh yeah, and their state is bordered by the Atlantic Ocean. And then they scratch their empty heads when the next day they are living in a frozen tundra of famine. – Kate Woods 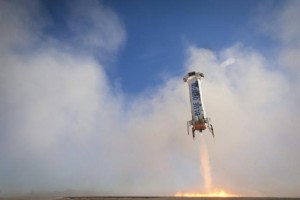 Amazon founder and gazillionaire Jeff Bezos’ praised his rocket services firm Blue Origin on Saturday for its third consecutive successful launch and landing of the New Shepard space tour bus designed to carry six zero gravity sightseers on a suborbital flights.According to Reuters, the New Shepard blasted from its West Texas launch site to an apogee of 339,138 feet (103,369 meters). Blue Origin plans to start crewed test flights of the New Shepard next year and begin flying paying amateur astronauts as early as 2018. 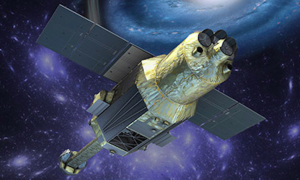 Scientists at Japan’s space agency JAXA continue to collectively scratch their heads in disbelief over  the mysteriously malfunctioning X-ray satellite observatory, Hitomi, which as of this writing appears to be spinning out of control in Earth orbit. The much-heralded black hole-studying craft, which was launched mid-February, was spotted breaking up into pieces on March 25, and as JAXA engineers frantically attempted to communicate with the $273 million instrument, it beamed a couple of short cryptic messages, and has since remained silent.  Then came the video taken on March 28 by Arizona astronomer Paul Maley who spotted Hitomi tumbling once every 23.5 seconds (see video here), which seems to explain why scientists are incapable of making contact with the observatory, according to Gizmodo. The US Department of Defense’s Joint Space Operations Center, which originally discovered the satellite’s shedding debris, reported that there is no evidence orbiting space junk is the culprit.  One theory was posited by Harvard astrophysicist Jonathan McDowell, who told Gizmodo that the craft may have a stuck thruster. 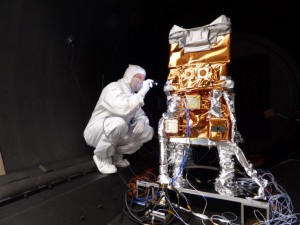 It won’t run on french fry grease, however Ball Aerospace’s shiny new Green Propulsion Infusion Mission spacecraft represents a giant step toward a more efficient and safer rocket fuel than the toxic and corrosive hydrazine used since 1960. Last Thursday Ball showed off its new eco-friendlier satellite that will be launched in early 2017 on a 13-month flight that will test how well the new propellant works with maneuvering a craft in orbit. If successful, net year’s test will  pave the way for widespread use of greener fuel in future NASA and commercial missions. 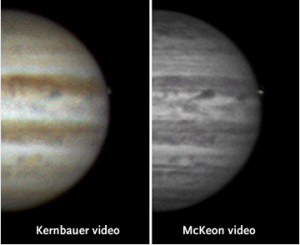 hing more than a cosmic arcade game with evidence that an asteroid or comet struck Jupiter sometime on March 17. Civilian stargazers Gerrit Kernbauer of Austria and John McKeon of Ireland captured video images of the direct hit, which according to Sky and Telescope, is the fifth time in the past decade that space debris has smacked the gas giant. Click here to see McKeon’s camera work.. 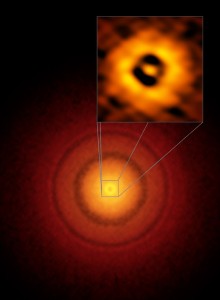 TW Hydra’s inner protoplanetary ring has many of the right ingredients to produce an Earth-like world.

The most detailed snapshot of a protoplanetary system reveals a band of dust around a “nearby” star that is approximately the same distance our Earth is to the Sun. The remarkable pic, taken by the Atacama Large Millimeter/submillimeter Array (ALMA) in Chile, shows a rare, undistorted view of  the 10-million-year-old TW Hydra and its pre-planetary dust rings. “The new ALMA images show the disc in unprecedented detail, revealing a series of concentric dusty bright rings and dark gaps, including intriguing features that may indicate that a planet with an Earth-like orbit is forming there,” notes Sean Andrews with the Harvard-Smithsonian Center for Astrophysics in Cambridge, Massachusetts. The “infant” TW Hydrae is a favorite target of study for astronomers because of its proximity as well as its face-on orientation as seen from Earth. 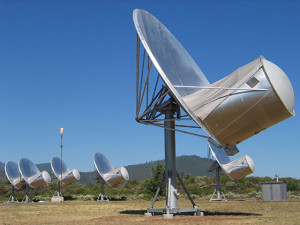 A light bulb – albeit a dim one – was set off in the minds of researchers scanning the sky for radio signals beamed by intelligent civilizations. The Mountain View Ca-based SETI Institute has announced that over the next two years it will listen in on 20,000 red dwarf stars, which is a radical new direction by SETI astronomers who for decades have confined their attention to larger, Sun-like candidates. “Red dwarfs – the dim bulbs of the cosmos – have received scant attention by SETI scientists in the past,” notes Institute engineer Jon Richards.  “That’s because researchers made the seemingly reasonable assumption that other intelligent species would be on planets orbiting stars similar to the Sun.”  In addition to the fact that three out of every four stars in our galaxy is a red dwarf, alien-hunters are encouraged by new evidence that planets orbiting close to these miniature suns have a greater chance of housing habitable zones than previously thought.