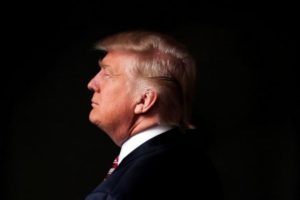 Republican U.S. presidential candidate Donald Trump poses for a photo after an interview with Reuters , May 17, 2016. REUTERS/Lucas Jackson

The U.S. is going to “renegotiate” the global climate deal we made with 200 other countries in Paris last Fall, said Republican presidential nominee Donald Trump – that is,“when” he gets into the White House.

And why not? After all, Trump claims that global warming is a hoax invented by the Chinese to undercut the competitiveness of American business.

“I will be looking at that very, very seriously, and at a minimum I will be renegotiating those agreements, at a minimum,” Trump told Reuters news service. “And at a maximum I may do something else,” added the narcissistic real estate mogul and orange creamsicle impersonator.

Trump’s mindless drooling fans claim the madman “tells it like it is!” NOT. 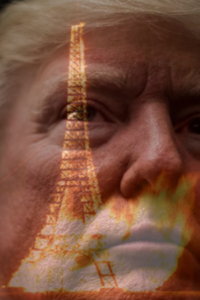 As he does with every other aspect of Constitutional and democratic processes, Trump again has undressed his bare stupidity and ignorance for the masses in telling them he will “get a better deal.” That’s not how this works.

The Paris Climate Accord represents two decades of science gathering, negotiating, calculating and old-fashioned teeth-pulling between the 200 countries that finally agreed on it in order to save the planet from man-made carbon emissions – a fact that 99 percent of world scientists have admitted is truly happening. It is an agreement by the signing nations to cut greenhouse emissions to the point where the Earth’s temperature cannot rise more than another 2 degrees Celsius. It also pledges to provide money to developing nations for mitigation of rising sea levels and other consequences of climate change.

Were the U.S. to pull out of it, say climate experts, the entire deal could easily collapse between the other 199 participants. President Obama pledged a 26 to 28 percent reduction in greenhouse gasses by 2025. And Democratic presidential contender Hillary Clinton said she hopes to up that pledge to 50 percent reduction in emissions by 2030.

Meanwhile, the rest of the world sighs at America’s mania for a dangerous moron like Trump.

Former French foreign minister Laurent Fabius, who helped broker the deal, said this month that the U.S. election was critical to its future. “If a climate change denier was to be elected, it would threaten dramatically global action against climate disruption,” he said. 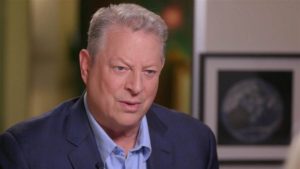 Others hoisting warning flags include 2000 presidential election winner and Oscar-winning documentarian Al Gore, who chimed in on the Today Show, stating that a Donald Trump presidency could roll back the tide on the fight against climate change. “He has said some things on the climate crisis that I think should concern everyone,” said the former Vice President. Describing the tone of Trump’s presidential campaign as “unusual,” Gore added that “I’m one of the millions who sometimes just does a double take. ‘Whoa, what was that?” (Note: To mark the 10th anniversary of release of Gore’s “Inconvenient Truth” on Tuesday, Paramount is offering free downloads of it on Amazon, XFINITY on demand, iTunes and other digital retailers.) 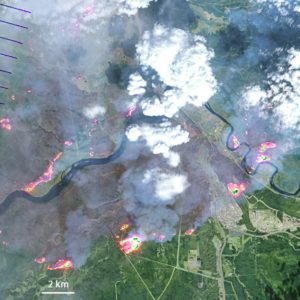 Speaking of inconvenient truths, as of Sunday the gargantuan Fort McMurray firestorm in Canada continues to rage, and is now threatening nearby oil sands, forcing shut downs and/or evacuations of 19 oil facilities.  According to The Globe and Mail, the blaze has charred over 500,000 hectares (1,931 square miles) and has crossed into Saskatchewan. In comparison, the deflagration is large enough to gobble up the province of Prince Edward Island, which is a little over 560,000 hectares (2,162 square miles). – Kate Woods & Agnet Bonwitt 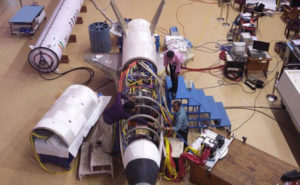 Six and a half meter RLV prototype being built near the fishing village in Kerala, India.

India continues to prove that it has a place at the big people’s table of space faring nations with today’s planned launch of its much-anticipated space shuttle prototype. Conceived over 15 years ago, the sub-continent’s Reusable Launch Vehicle (RLV) program 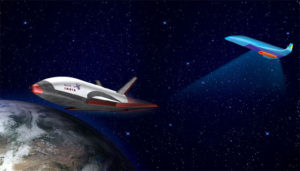 is now at a critical juncture as fingers will be crossed today while the 1/6 RLV model will be lifted 70 kilometers just beyond the threshold of space, and then free-glide back to Earth, with a controlled crash-land into the Bay of Bengal, according to NDTV. While the experimental craft will remain in a watery grave, India’s Space Research Organization will use data collected from the flight to pave the way for the final 40 meter long space taxi that is expected to have its maiden flight in 2020. 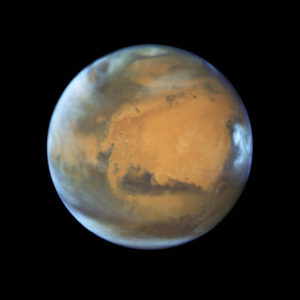 In honor of Mars’ closest approach to Earth in 11 years, astronomers used the Hubble Telescope to take a close-up portrait of the handsome devil when it was about 50 million miles from us earlier this month. The pic, which reveals details as small as 20 miles to 30 miles across, was taken a  few days before Mars’ opposition yesterday when the Sun and the Red Planet were on exact opposite sides of Earth. Next Monday Mars will be at a relatively cozy 46.8 million miles from our planet. 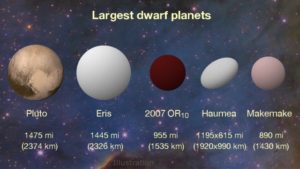 Scientists reporting in The Astronomical Journal last month have provided evidence of a previously undefined dwarf planet that appears to be the third largest in our solar system. The so-far unnamed 2007 OR10 was discovered beyond Neptune’s orbit, and was pinpointed using a data mash from the Kepler space telescope and thermal readings from the Herschel  Space Observatory.  Boasting a 1000 mile diameter,  our newly-recognized diminutive celestial neighbor spins at a super-slow 45-hour daily rotation, and has an extremely dark surface area which is believed to be the result of constantly-changing methane ice.

NASA’s New Horizons spacecraft, which over the past year has been flooding the space

agency will stunning new data from its historic 2015  Pluto flyby, has found a new lease on life with observations of a 90-mile-wide Kuiper Belt object (KBO) orbiting more than 3 billion miles from the Sun. So far, New Horizons has twice examined space rock 1994 JR1, and has helped clarify some misconceptions on the nature of such far-flung celestial neighbors. “Combining the November 2015 and April 2016 observations allows us to pinpoint the location of JR1 to within 1,000 kilometers (about 600 miles), far better than any small KBO,” he said, adding that the more accurate orbit also allows the science team to dispel a theory, suggested several years ago, that JR1 is a quasi-satellite of Pluto,” said  Simon Porter, a New Horizons science team member from Southwest Research Institute (SwRI) in Boulder, Colorado.  From the closer April observation, NASA scientists were able to determine that JR1 rotates at a relative speedy 5.4 hour clip. On a related note, New Horizons is on course for an “ultra-close” flyby of another KBO, 2014 MU69, on Jan. 1, 2019. 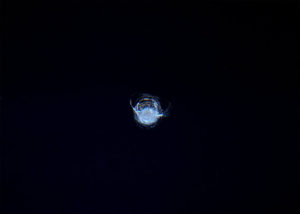 A recent close encounter the International Space Station had with a speck of space junk highlights the potentially lethal hazard cosmic litter has to human space exploration. Earlier this month, British astronaut Tim Peake snapped a pic of a 7 millimeter-diameter ding in the station’s ESA-built cuppola window caused by “a tiny piece of space debris, possibly a paint flake or small metal fragment no bigger than a few thousandths of a millimeter across.”

“I am often asked if the International Space Station is hit by space debris,”  said Peake, who took the photo as he sailed 240 miles above the Earth.  “Yes — this is the chip in one of our Cupola windows, glad it is quadruple glazed!”  (The European-built Cupola was added to the International Space Station in 2010 and continues to provide the best view of the Earth anywhere.)

While supersonic micro-trash can cause relatively minor damage as with the ISS’s cupola window, orbiting debris larger than just 1 cm could penetrate the space station crew modules, while chunks bigger  than 10 cm could shatter a satellite or spacecraft into smithereens. 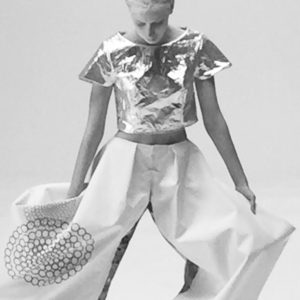 Hold on to your fascinator Queen Elizabeth!  This week, London’s Science Museum and the European Space Agency will be sponsoring  a “Couture in Orbit” hullabaloo in which five leading European fashion schools will roll out specially-designed clothes for the space age.

“This is not a competition but a celebration of the inspirational face of space exploration,” says ESA, which will have judges select 15 pieces from each school to be unveiled at the museum this Thursday.

Design institutes representing the national origin of ESA astronauts who have and will visit the space station between 2014 and 2016 are participating in the futuristic fashion soiree, and have been asked to design and develop “clothes that are both desirable and practical, while incorporating high-tech innovations.” 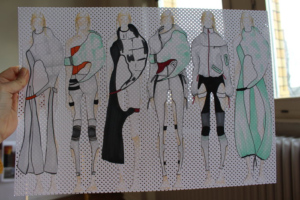 According to ESA, each school will trot out accouterment reflecting assigned themes ranging from “technology, environment and innovation to health and nutrition, and has to consider the applications of their designs in daily life.”

Each catwalk ensemble will be made with space-certified textiles supplied by ESA, as well as the firms Bionic Yarn and Sympatex.

The Japanese space research and entertainment company ALE wants to literally light up the sky for Tokyo’s 2020 Olympic Games with an out–of-this-world fireworks splash involving a satellite “loaded with about 500 to 1,000 ‘source particles’ that become ingredients for a shooting star,”

According to Quartz, the company, which plans to loft its first satellite in the second half of 2017, describes how the cosmic light display will work:

When the satellite stabilizes in orbit, we will discharge the particles using a specially designed device on board. The particles will travel about one-thirds of the way around the Earth and enter the atmosphere. It will then begin plasma emission and become a shooting star. 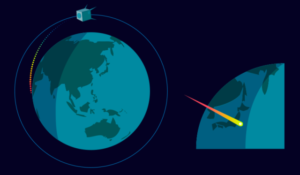 If successful, the artificial meteor show will be visible within a 62 mile (100 kilometer) radius, with a potential audience of 30 million people in the greater Tokyo area.

According to the company, this 21st century pageantry is more than just flash and no substance. ALE’s ultimate goal is help better understand how spent satellites and other orbital debris can be safely disposed of in the Earth’s atmosphere.