Once again, Donald Trump has proved his dangerous ignorance in matters of our environmental survival and democratic process when he held a rally in Fresno, California, on Friday.  The presumptive Republican presidential nominee told California farmers just what they wanted to hear in a state where a long-time war has been waged over water. 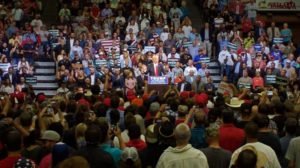 Much like the people he is appealing to, Trump erroneously claimed that California’s parched Central Valley is withering not for the four-year drought the state has suffered as a kickoff to global warming, but because environmentalists are trying to save the critically endangered Delta smelt.

The tiny, luminous fish has become an emblem of loathing to Central Valley farmers since environmentalists tried to save it from dwindling rivers and creeks.  But the fact is that the ocean food web – and therefore, the seafood industry — depends largely on the smelt population, which normally resides in deltas, swamps, and estuaries.  In other words, the silvery blue, cucumber-smelling fish is near the bottom of the critical ocean food chain.

Something smells fishy. Trump’s claim of a rigged California drought does not hold water.

In his speech, Trump falsely inferred that environmental policy makers have intentionally kept the delta pumps turned off to farmers so that they can nefariously dump the extra water in the ocean when no one is looking.

It would be funny, if no one took the blowhard seriously.  Unfortunately, the crowd in Fresno drank his Kool-Aid with more gusto than dehydrated prospectors lost in Death Valley.

“If I win, believe me, we are going to start opening up the water so that you can have your farmers survive. So that your job market will get better,” Trump said. 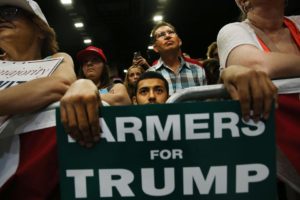 So the real estate tycoon not only re-stirred the pot of hatred over water here in the Golden State, but then went on to re-galvanize long disproved conspiracy theories by rural ag folks as part of their water fight with urban areas.  In truth, over the last decade the Central Valley underground aquifer has lost more than 11 trillion gallons of water, mainly due to Big Ag corporations sucking the ancient underground waterbed dry for water-intense mega-crops like “King Cotton” and “King Rice.”  (Those monarchial designations have been used sardonically by small farmers for years when referring to the massive ag corporations they compete with, not only for water but for government subsidies.) 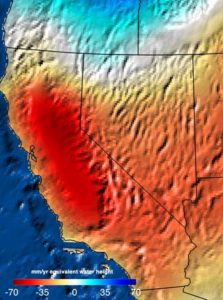 The numbers were made clear when NASA revealed crunched data from their Gravity Recovery and Climate Experiment (GRACE) in 2011.  A NASA press release stated: “GRACE data reveal that, since 2011, the Sacramento and San Joaquin river basins decreased in volume by four trillion gallons of water each year (15 cubic kilometers). That’s more water than California’s 38 million residents use each year for domestic and municipal purposes. About two-thirds of the loss is due to depletion of groundwater beneath California’s Central Valley.”

The next time you hear Trump say, “Let’s make America great again!” – first, try not to vomit.  Then find anyone you know who is even thinking about voting for this walking/talking disaster, and show him or her some of these scientific facts. (Editor’s note: Stayed tuned next week for a detailed  review of Trump’s high-octane, low IQ “Energy Policy” he unveiled in North Dakota last week.)

It won’t be easy, since facts mean nothing to sociopath Trump or his followers.  You might try asking if they like water, food or air.  Then draw the connecting lines between the dots for them.  —  Kate Woods

It’s three strikes in a row for Space X, which successfully landed the first stage of its Falcon 9 rocket last week on an “X” marked drone barge. In typical Elon Musk fashion, the company, which now has four booster landings to its credit, poured on a media blitz, including the dazzling video below of the Falcon’s descent and alightment onto the sea-borne dock.

Planetary Resources Inc, the Redmond WA-based asteroid mining company, announced last week that it has hustled $21.1 million in capital to deploy and operate its highly-touted Ceres Earth observation business. Based on the firm’s model of exploring and exploiting asteroid resources, PRI intends to point its Arkyd spacecraft armed with the first commercial infrared and hyperspectral sensor platform to “deliver affordable, on-demand Earth intelligence of our natural resources on any spot on the planet.” The company is currently testing the Ceres sensor platform, which will be launched aboard an Arkyd 6 satellite on an upcoming Space X Falcon mission. 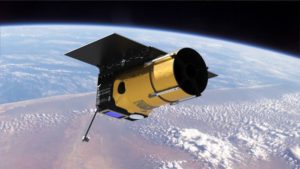 Bryan Johnson, who led the financing campaign with his OS Fund, remarked that “With Ceres, Planetary Resources has leapfrogged traditional imagers for monitoring Earth’s natural resources, creating far-ranging opportunity. It’s a seismic shift for the new space economy.”  If PRI is successful, our planet will be ringed by a constellation of 10 satellites constantly monitoring the globe as they serve multiple industries including agriculture, oil & gas, water quality, financial intelligence and forestry.  Ceres will also be used to analyze the spectral signatures of crops and provide customized data to farmers, pinpoint energy and mineral resources, and eyeball pipelines and remote infrastructure. PRI also boasts that the system will capable of tracking toxic algae blooms, eyeball global water quality, and detect the early stages of wildfires. 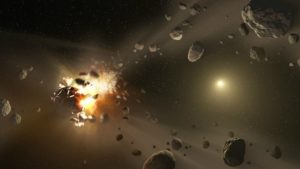 Nathan Myhrvold – ex-Microsoft Chief Technologist, billionaire patent collector, noted molecular gastronomist, award-winning wildlife photographer, and amateur paleontologist  –  apparently is bored, and has accused NASA in a paper submitted to the journal Icarus that the space agency’s statistics on potential killer asteroids are way off base. Basically Myhrvold, who’s had his finger in about as many pies throughout his adult life as humanly conceivable,  is unimpressed with data NASA has obtained from its Wide-field Infrared Survey Explorer (WISE) spacecraft used to determine the size and reflectivity of 158,000 asteroids, claiming that the craft’s observations are “basically wrong.” Myhrvold contends that NEOWISE’s calculation could be more than 100 percent off, and that NASA researchers have failed to include Kirchoff’s law of thermal radiation in their models. “Asteroids are more variable than we thought they were,” Myhrvold says. 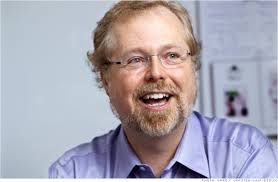 Responding to Myhrvold’s criticisms, NASA pointed out several mistakes and problems with his analysis. WISE principal investigator Ned Wright defended the WISE data, explaining that it correlates with two other infrared telescopes – AKARI and IRAS. “For every mistake I found in his paper, if I got a bounty, I would be rich,” Wright told Science. JPL scientist Amy Mainzer also cited problems with Myhrvold’s report, dryly noting the former Microsoft technologist’s confusion over diameter for radius.  NASA’s planetary defense chief dropped the mic, saying while Myhrvold is an intelligent man but it doesn’t mean he’s an expert. 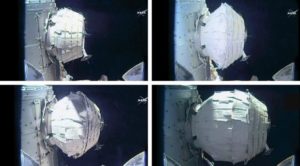 After a stream of snarky press stories about how it failed to work, the space station’s new inflatable add-on module is now ballooned up and running after the crew gave it another whirl Saturday – this time swelling the module with air very, very slowly.

The experimental Bigelow Expandable Activity Module (BEAM) is the first of its kind on the ISS.  It is hoped the BEAM unit, which is light-weight and inflatable (and therefore economical), may be used in future missions — as both a deep space habitat and even a commercial space station.  The crew is scheduled to enter the BEAM next week, after it’s fully checked for possible leaks, to outfit the handy add-on with sensors. 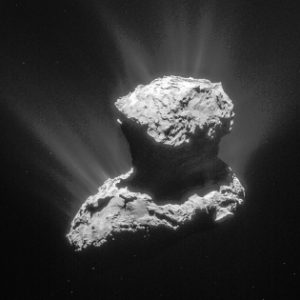 The European Space Agency’s Rosetta spacecraft has detected on a comet crucial biological building blocks, providing scientists further proof that asteroids and comets were key in delivering water and organic materials to a young Earth that led to the emergence of life on the planet. Traces of the simplest amino acid glycine were previously found in samples returned to Earth by NASA in 2006 from Comet Wild-2; however, researchers were unable to make a positive ID due to the possibility that the dust samples were contaminated. “This is the first unambiguous detection of glycine at a comet,” said Kathrin Atwegg, the lead investigator of the Rosina instrument responsible for taking the measurements and and lead author of a paper on the topic published in Science Advances last week. Study co-author Herve Cottin added that while there is still a huge “evolutionary gap” to fill between cometary impacts and life springing up on our planet. “The important point is that comets have not really changed in 4.5 billion years: they grant us direct access to some of the ingredients that likely ended up in the prebiotic soup that eventually resulted in the origin of life on Earth.” 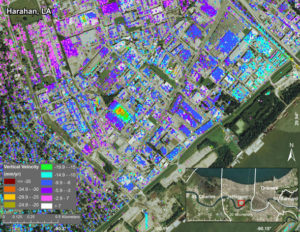 It’s scary enough that sea levels worldwide are encroaching coastal communities faster than scientists had predicted, thanks to that “hoax” called global warming (Trump says it’s mere trickery invented by the Chinese to foil American carbon-belching industries).  But couple the rising water with sinking land, and you get… yes, New Orleans. 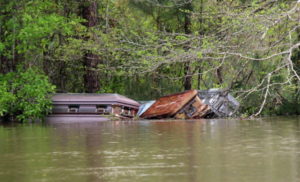 NASA announced results of a three-year study using sat images and airborne radar aimed at the Big Easy, and found that the city as well as the region surrounding it is sinking up to two inches a year in places.  The sinking, drowning coastal area affected is home to more than a million people – but probably not for long due to the exponentially intensifying vanishing act of the ground beneath them. 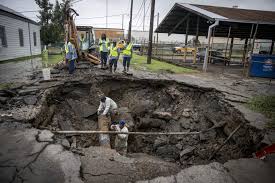 When land sinks, scientists call it subsidence, and blame much of that on over-pumping of groundwater.  City work crews call it sinkholes, and apparently there’s an ocean of them peppering the greater New Orleans area.