Evidence of catastrophic global warming has been reported with exponentially rising frequency this summer, but according to America’s Republican presidential candidate, the world is not to worry. 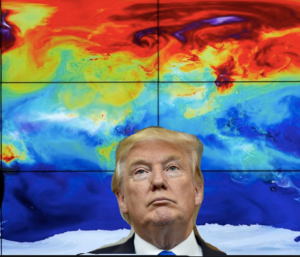 In an interview last week with the Miami Herald, Donald Trump again said he was not “a big believer in man-made climate change.”  One would think that he’d have a better eye doctor considering his “huge wealth,” as his most beloved mansion, Mar-a- Lago (Palm Beach, Florida) – one of many opulent Trump estates – sits on ground zero for rising sea levels. 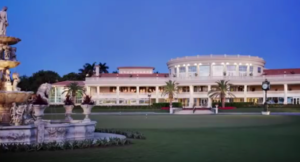 The candidate did actually acknowledge that sea levels were rising, but that it was part of a natural cycle.  “I don’t believe it’s a devastating impact….”  He attributed sea level rise to “a change in weather patterns, and you’ve had it for many years.”  (Hmm … That’s very deep, but not as much as the Pro Shop will be at Trump’s swanky “Blue Monster” golf course in Miami.)

Trump also added that he wants local governments to deal with the problem, not the federal government.  Although, he might want to ask how the Miami City Council feels about that bright idea, since they recently had to gut the city budget of $500 million to prepare their metropolis for the onslaught of the impending salty deluge. 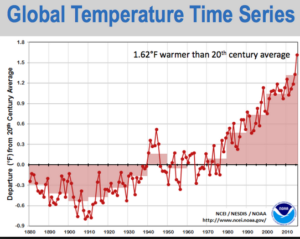 1.5 degrees C, as agreed upon by 200 nations last December at the Paris Climate Conference, is “impossible, or at the very least, a very very difficult task.” That’s the opinion of Stanford University professor Chris Field, co-chair of the International Panel on Climate Change.  He cited that the Earth already peaked at 1.38 C in February and March, which is far sooner than expected.  Field and other climate scientists are meeting in Geneva this month to figure out how to implement the Paris agreement – that is, if it still can be. 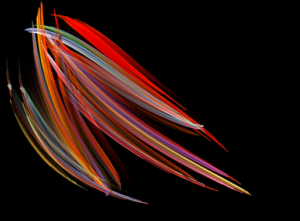 Nature World News also reported this week that a plankton die-off in the oceans has accelerated due to acidification, lack of oxygen, and rising sea temperatures.  Acidification is caused by carbon monoxide from the atmosphere mixing into the vast oceans.  The result will be a domino effect that will kill off massive swaths of the marine food chain, this time starting at both ends of sea species since the main diet of whales is the minute plankton. 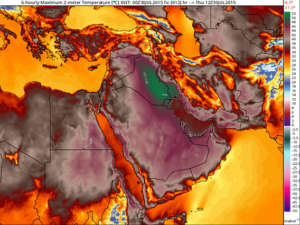 Last year in August, Iran experienced a scorching “heat dome” in which the heat index reached an uninhabitable 165 degrees F.

As if the above wasn’t bad enough, United Nations and climate scientists have put out advisories recently that temperatures in the Middle East have broken the records this summer: In July, the city of Basra, Iraq, hit 54 degrees Celsius – that’s 129 degrees Fahrenheit.  The heat in Kuwait and Iraq, as reported in the Sydney Morning Herald, has actually “startled” observers and alarmed those who are used to high heat.  Stepping outside is like “walking into a fire,” said Zainab Guman, a 26-year-old university student who lives in Basra.  “It’s like everything on your body – your skin, your eyes, your nose – starts to burn,” she said.  The entire country has taken to avoiding all daylight, and the streets are empty until nightfall.  Experts have estimated it will only get worse, making the region from Morocco to Saudi Arabia uninhabitable for humans and most other species, possibly by 2050 – or sooner.

So, even as we face eye-to-eye with these life-eliminating climate conditions, Trump says if he is elected, he will “cancel” the U.S’ commitment in the Paris Climate Accords.  He also reminded us that “We have so many environmental regulations that, you go to other countries, where they don’t have that, it puts us at a tremendous disadvantage,” he said.  He has vowed to dismantle the EPA, calling it a “fraud.” 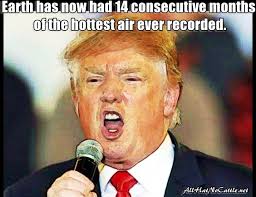 Yes, we’re standing by this one.

I dunno – maybe Trump is right! With slave labor and no concern for anything living, we can be the ones putting China and Laos to shame – as well as perhaps start a whole new gas mask industry! Of course, we will all be dead from toxic air, the absence of water and what little poisoned, pesticide-laden food is left, but at least we could save face and money — or at least “smart” businessmen like Trump will save a boat-load of dough. Let’s put America back to work!  Let’s make America Great … and Dead … Again!

Now that’s actual sarcasm Mr. Trump – not the irresponsible hyperbole you claimed was “misunderstood” last week when you so unfunnily said that President Obama and Democratic candidate Hillary Clinton are the “founders of Isis.”  Global warming is all too real to most of the world right now, and it’s a lethal threat that could make vicious terrorism become a secondary concern.  – Kate Woods 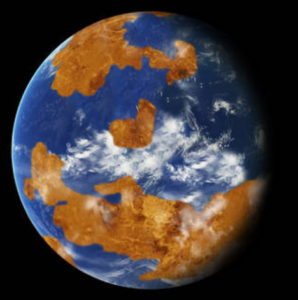 The past is prologue? NASA scientists depict a younger, Earth-like Venus.

The same tools used to model climate change on Earth have been employed to paint a dramatically different picture of the planet Venus as it existed just up to 715 million years ago, according to a new NASA Goddard Institute for Space Studies (GISS) study. Instead of the present-day dry and toxic wasteland where surface temperatures can soar as high as 864 degrees F, for a period of about 2 billion years an Ancient Venus may have been so radically different that it could have been ideal for supporting life. Using a computer model that hits the rewind button on the planet’s geophysical history, the GISS researchers suggest that the second planet from the Sun sported a liquid water ocean that was the source of a thick vapor cloud that served as protection from the scorching solar rays and maintained habitable temperatures as low as 50 degrees F. 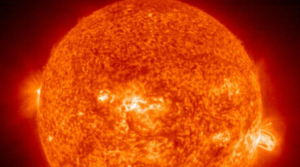 military equipment that brought the world close to a nuclear war, according to a study recently published in Space Weather. The solar storm, one of the most intense in the past century, was so strong that it knocked out all three of the US’s early-warning system radars used to detect incoming Soviet missiles, thus sounding “red alert” alarms and sending Air Force personnel scrambling to ready nuclear-laden aircraft since US officials briefly believed the Soviets were capable of jamming radar, and considered such electronic “hacking” an act of war. “The aircraft did not launch –we’re pretty certain of that,” lead researcher Delores Knipp of the University of Colorado at Boulder told Gizmodo. “Was war imminent? What we know is that decisions were being made on the tens of minutes to hours basis, and that information got to the right place at the right time to prevent a disaster.” According to the recent study, the newly-established Solar Forecasting Center was able to sniff out the real cause of the radar disruptions just before the world was blown to smithereens. 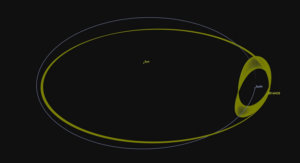 After 100 years of being in lock step with the Earth a small rocky piece of space dirt has officially earned the rank of “quasi-satellite” status. The mini-moon – asteroid “2016 HO3” –  was first spotted on April 27, 2016, by the Pan-STARRS 1 asteroid survey telescope on Haleakala, Hawaii, and is believed to be 120 to 300 feet in size.  “Our calculations indicate 2016 HO3 has been a stable quasi-satellite of Earth for almost a century, and it will continue to follow this pattern as Earth’s companion for centuries to come,”  noted Paul Chodas, manager of NASA’s Center for Near-Earth Object (NEO) Studies at the Jet Propulsion Laboratory in Pasadena, California. 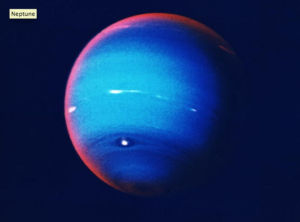 A newly-discovered Trans-Neptunian Object is causing scientists to scratch their heads due to its unusual characteristic in which it traveling the opposite direction of other bodies in our solar system.  Dubbed “Niku” (Chinese for rebellious), the minuscule 200 km dwarf planet also orbits in a plane that’s tilted 110 degrees to our solar “disc”  According to a  Huffington Post report, astronomers are speculating how Niku got its askew and retrograde orbit. One theory involves the possibility that Niku was knocked off course by some other, as-of-now unknown object. Discovered via the Pan-STARSS telescope system in Hawaii, Niku appears to be part of cluster of similar objects and icy planetoids with similar unusual orbits.