Republicans in DC have long carped on NASA for doing too much Earth science (translation: global warming research) instead of allotting more money for deep space exploration.  Last week, the space agency suggested it may soon cave in to their nagging. 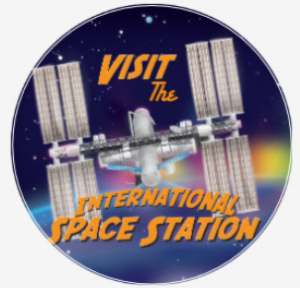 In a press conference about Mars last Thursday, NASA’s Deputy Administrator of Space Exploration, Bill Hill, said they want to place the International Space Station into commercial hands within the next ten years.  “Ultimately, our desire is to hand the space station over to either a commercial entity or some other commercial capability so that research can continue in low-earth orbit, we figure that will be in the mid-20s,”  Hill said.  You can’t get more plain that that.

I have ugly visions of “Exxon Mobil” screeching in “bitchin’” colorful decals on the side of the ISS. 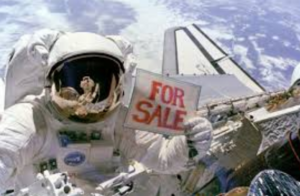 To seriously get to Mars — by 2033 as Hill told reporters last week — and on the skinny budget Republicans allot for America’s space endeavors, we can see how NASA would have to sacrifice the International Space Station on the altar of capitalism.  At a cost of $4 billion a year to operate, NASA spends 20 percent of its annual budget on missions to and fro the ISS.  And that’s just the U.S. section! 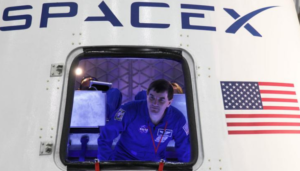 SpaceX’s missions to the space station will taxi as many as four crewmembers to low Earth orbit.

But there’s the rub.  The operative word that is getting lost in this new noble gesture is “international.”  The ISS, which took decades to get off the ground after countless revisions that whittled the engineering marvel into a smaller and smaller shadow of its original self, is still a group global effort.  Would NASA merely sell the American portion of the space platform?  That certainly has not been made clear yet.

Since it first opened its docking bay in 2000, the station was supposed to have a shelf life through 2015.  Boeing – the primary contractor – is doing a feasibility study to see if it can 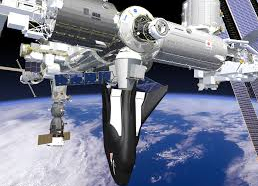 last beyond 2028,  twice its life expectancy.  The experiments conducted up there have been invaluable to every genre of science, from studying new cancer therapies to searching for the elusive “particle x.”

There is no doubt that something’s gotta give if we are to get humans to Mars.  Either NASA’s budget should be doubled or America should scrub its collective – and not privately-backed – effort to reach for the stars.  Galactic Sandbox suggests that Congressional Republicans put up or shut up. 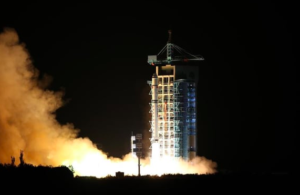 Last week, China boasted the launch of the world’s first “quantum satellite” that according to the state news agency Xinhua is ” designed to establish ultra-secure quantum communications by transmitting uncrackable keys from space to the ground,” as well as “conduct experiments on the bizarre features of quantum theories, such as entanglement.” In other words, China is claiming that its Quantum Experiments at Space Scale (QUESS) satellite – addition to transmitting sensitive information via “quantum key encryption” — will literally teleport data from a sun-synchronous orbit 310 miles above Earth.  Now, before your “woo woo” meter flashes “tilt,” take a look at a last week’s Quartz article that explains the science behind this story much more intelligently than we could possibly do in this limited column space. 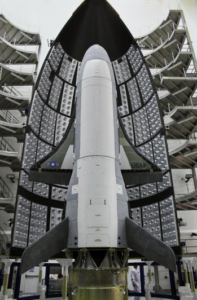 The US Air Force’s newly launched eye-in-the-sky sats join the secret unmanned X37B space plane that has already been in orbit for a year.

While you weren’t looking, the US military took homeland security to new heights, and  launched two spy satellites Friday as part of the Air Force’s newly-christened orbital “neighborhood watch” program. According to New York Daily News writer Gersh Kuntzman, the official story as reported by USA Today is that the Geosynchronous Space Situational Awareness Program birds will deter US “enemies” from running “hostile operations in space as an extension of the terrestrial battlefield,”  In other words, the latest spooksats will monitor our current spacecraft for possible collisions with ncoming missiles launched by unfriendly nations. You can understand our uneasiness about this latest development despite the Air Force’s insistence that the U.S. is not looking to weaponize space. As Mr Kuntzman notes, the the Air Force is spending about $10 billion on classified space operations  this year —nearly twice the $5.5 billion the entire Pentagon will reportedly spend on cybersecurity acquisitions. 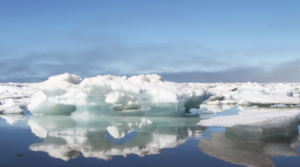 Sea ice melts off the beach of Barrow, Alaska where NASA’s Operation IceBridge is being conducted this year.

Scientists at the National Oceanic and Atmospheric Administration (NOAA) are feverishly adding up the latest temperature readings for July and are finding that this past month was the warmest globally since records started being kept back in 1880. NOAA climate scientist Jake Crouch adds that weather data predict continued record temperatures, with this year very likely being “the warmest year on record for the globe.” Of course, this is no freak occurrence, since the past 10 years have seen multiple temperature records being smashed. As the heat continued to rise, Kuwait roasted in 126 degree Fahrenheit temperatures, and droughts in California and the US Southwest worsened, creating explosive tinderbox conditions. In addition, the Arctic continues to warm up twice the rate of the rest of the world, with oceanographers predicting that it won’t be long before the Arctic Ocean is ice-free in the summer (Barf Alert: Cruise ships are now gearing up to plow through the Northwest Passage Sigh.) 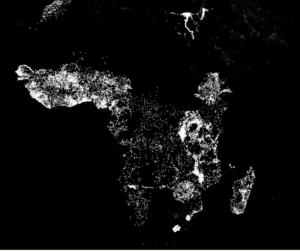 A new Stanford machine-learning system compares satellite images of nighttime lights indicative of electricity and economic activity with daytime pix of roads, urban areas, bodies of water and farmland to come up with a highly-accurate means of predicting extreme poverty areas around the globe.

Stanford University interdisciplinary researchers have corralled millions of high-resolutions satellite images to come up with a new “poverty mapping” machine -learning system to more accurately identify the  poorest areas of the world. This new model discipline – a subset of the broader field of artificial intelligence – uses both “daytime and nighttime satellite imagery … to make predictions on poverty,” said Stefano Ermon, assistant professor of computer science at Stanford. “The system essentially learned how to solve the problem by comparing those two sets of images,” he added.

NASA rocket scientists were buoyed by last week’s successful test of Space Launch System engine, bringing the agency one step closer to an inaugural blast off of its deep space mega missile in late 2018. The RS-25 engine  — basically an upgrade to the space shuttle era motors used for over three decades — will power NASA’s planned crewed missions to the Moon, Mars and beyond. 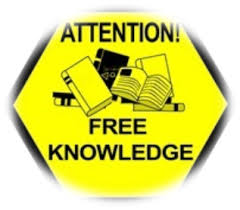 will no longer charge the public for its library of knowledge. Within the year, the agency plans to release thousands more of its papers, with topics ranging from the toxicity of lunar dust to the make-up of Earth’s early atmosphere.

Until now, NASA’s research papers were available for a fee (and considering how the agency seems to be selling off its assets, we’re surprised they don’t continue the trend with its acquired discoveries). Of course, matters of national security, defense and patents are still off limits. The move comes three long years after the White House Office of Science and Technology Policy directed the agency to make more of its research accessible to the public. So far, there are about 850 papers available now at NASA’s Pubspace. 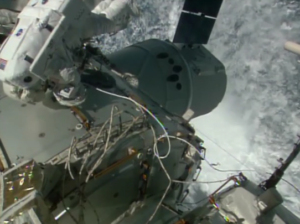 Astronaut Kate Rubins puts the final touches on the new Space Station docking port that will be the entry and exit point for a new generation of commercial crew-ferrying spacecraft. Rubins is the 12th woman astronaut to perform a spacewalk.

International Space Station astronauts Kate Rubins and Jeff Williams performed a little home improvement last week and installed a new station docking port that will be used by crew-carrying commercial spacecraft built by Space X and Boeing in the next couple of years. The international docking adapter (IDA) was launched last month atop Space X’s Falcon rocket and delivered to the ISS via the company’s Dragon orbital transport. According to a NASA release,  “the systems and targets for the IDA are much more sophisticated than previous docking systems and include lasers and sensors that allow the station and spacecraft to talk to each other digitally to share distance cues and enable automatic alignment and connection.”