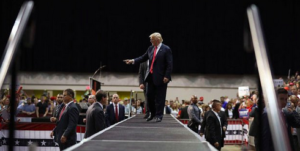 Real estate mogul/confidence half-man Donald Trump pulled yet another head-scratching reversal in whatever the hell he is going to do if, God forbid, he becomes President, when he told voters last week in Daytona Beach, Florida, that the nation’s space program was “Third World.” 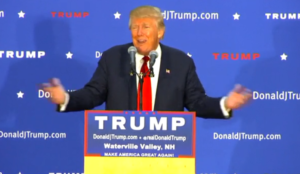 Trump tells 10-year-old last year that the US needs to fix potholes rather than spend money on space exploration.

Like everything that emanates from Trump’s pretzel-shaped brain, the implication is that he, and he alone, will make NASA “great again,” absurd rhetoric that he hopes Floridian conservatives would lap up. Yet back in November, when a ten-year-old boy asked him his opinion of the space program, Trump alluded that he would rather nuke the world instead of discovering the wonders beyond it.

“You know, in the old days, it was great,” Trump replied. “Right now, we have bigger problems. You understand that? We’ve got to fix our potholes. You know, we don’t exactly have a lot of money.” 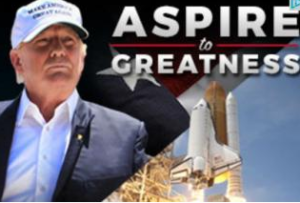 Trump ads hijack NASA accomplishments while the candidate’s space policy lacks the aspiration for anything great or small.

It’s dubious that Trump is even aware of the surge in commercial space endeavors this past decade, such as those accomplished by companies like Space X and Blue Origin, never mind the latest achievements made by NASA and it’s Orion Crew Vehicle and the Space Launch System.  We doubt he is even aware that there is an internationally collaborated space station flying over his orange, day-glow head.

What is extremely disturbing for the future of American space exploration and the decades-long planning for a Mars Mission is what Trump said in a recent interview with Aerospace America: “Our first priority is to restore a strong economic base to this country. Then, we can have a discussion about spending.” 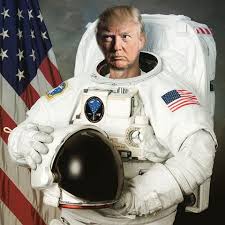 A petition was started a few months ago on Change.org asking NASA to send Trump into space and leave him there. So far the petition has garnered 69,439 signatures. Click here to join the fun!

Then Trump flipped his position again. In a Reddit “Ask Me Anything” session that was conducted during the Democrats’ convention, Trump said, “Honestly I think NASA is wonderful! America has always led the world in space exploration.”

And, again, days later on his Twitter account: “It is very sad to see what @BarackObama has done with NASA. He has gutted the program and made us dependent on the Russians.”

What The Flying Spaghetti Monster??

The editorial staff of Galactic Sandbox believes the Republican candidate is mentally unstable and exhibits a chasm of ignorance regarding anything scientific, technological or inventive.  Remember: this is the maroon who sincerely believes (at the moment) that global warming is a hoax perpetuated by the Chinese in order to undermine American industrialism.  We know our readers are with us.  We only ask that you educate your family and friends about the stakes involved in this insanely weird election cycle. Keep hope alive! — Kate Woods 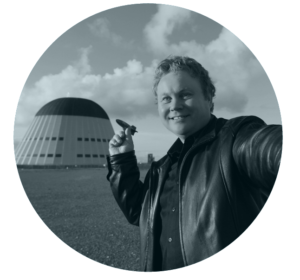 In a landmark decision last week, the US government for the first time approved a commercial firm to travel beyond Earth’s orbit and land on the Moon. Florida-based Moon Express, Inc. (MoonEx) announced last week that it’s been given the federal interagency green light to conduct its maiden robotic lunar mission in 2017 that will carry experiments designed to explore the nature of relativity and quantum mechanics. While MoonEx understandably trumpeted the decision as a giant step toward humanity’s permanent presence in the cosmos, comments by the company’s founders sound more like the words of greedy children drooling over a manifest destiny land grab. “We are now free to set sail as explorers to Earth’s eighth continent … seeking new knowledge and resources to expand Earth’s economic sphere for the benefit of all humanity,” gushed MoonEx co-founder and CEO Bob Richards. MoonEx co-founder and chairman Naveen Jain echoed his cohort’s sentiments saying that in the immediate future they “envision bringing precious resources, metals, and Moon rocks back to Earth.” 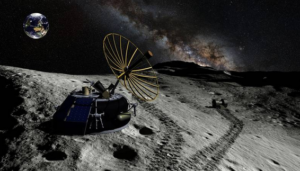 by Google as part of the Lunar XPRIZE competition, in which commercial entities must land on the Moon, blast off again, and then drop anchor more than 1,500 feet away and beam high-definition video images back to Earth. 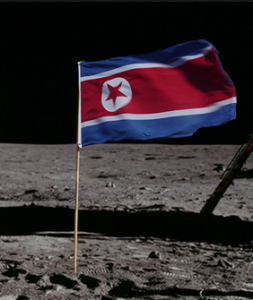 Kim Jong-un on the Moon? You heard right! Saber rattling North Korea has announced it’s gearing up to “plant the flag” of their fascist country on the Moon (robotically) within a decade. And they don’t give a fig about the U.S.’ stinking sanctions.

“Even though the US and its allies try to block our space development, our aerospace scientists will conquer space,” said Hyon Kwang-il, director of the scientific research department of North Korea’s National Aerospace Development Administration. 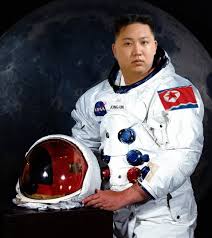 In the last several years, North Korea has aimed “nuclear” warhead rockets southeast toward South Korea and sort of at the United States, but the launches have had the impacts of bottle rockets. Some months ago they claimed to have blasted off their first “hydrogen bomb” – underground – which turned out to be a big fat lie. Nonetheless, astrophysicist Jonathan McDowell, an expert on international sats and launches, said their “declaration” isn’t all that far-fetched.

“Given their low flight rate of one [space] mission every few years, I think it is hard to see them succeeding in this in the next five years, but possible to see them attempting it,” he added.

A small white bag sold for $995 at a government auction in early 2015 has now become the center of a legal dispute that’s literally out of this world. According to the Washington Post, a sack used for the first samples of lunar material on the Apollo 11 mission in 1969 was mistakenly sold to a Nancy Carlson of Inverness, Illinois who sent the item to NASA’s Johnson Space Center for authentication, only to have it confiscated after the space agency discovered the bag was misidentified and sold without permission. Carlson promptly sued NASA to return the bag, and now the US Attorney’s office, which is calling the Moon 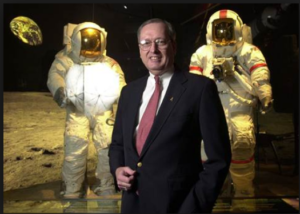 dust-embedded bag ““a rare artifact, if not a national treasure,” asked a federal judge last week to rescind the bag’s sale. Apparently, the mix up is the latest twist in the sordid tale of Max Ary, the founder and longtime director of the Kansas Cosmosphere and Space Center in Hutchinson, who was convicted in November 2005 for stealing and selling space artifacts and memorabilia. The lunar bag was discovered in 2003 n Ary’s garage, and was misplaced when it was ID’d the same as an identical bag from the Apollo 17 mission that was sold by Ary for $24,150 and also recovered during the investigation. 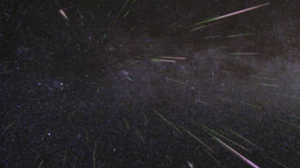 more impressive shooting star shows of the year. While the Perseids are one of the major perennial meteor displays, this year’s celestial splash is being touted as a “spectacular show” by the media echo chamber after NASA announced that forecasters are expecting double the rates with up to 200 meteors per hour (approximately 3 per minute) due to the planet Jupiter pulling comet Tuttle debris closer to Earth than normal.  However, before you don the hardhats, don’t be surprised if you’re somewhat disappointed as the result of media over-hype:  depending on the actual time of the peak, you are most likely going to stare at the sky for 10-15 minutes before seeing any signs from the heavens; also, be advised that the waxing Moon will limit viewing until well after midnight on the 12th. 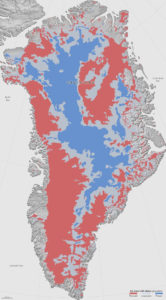 A platoon of NASA scientists are working under near-intolerable environmental conditions in Greenland, mapping the melt-rate of the continent and figuring how the catastrophe is contributing to climate change. The icesheet covers 80 percent of the country and the cold water rushing into the Atlantic from Greenland alone will make sea levels rise 24 feet. They have so far deduced that the southeastern and northwestern zones are already thawed. Galactic Sandbox wishes to congratulate every global warming denying Republican in Congress for this preventable world disaster of biblical proportions.