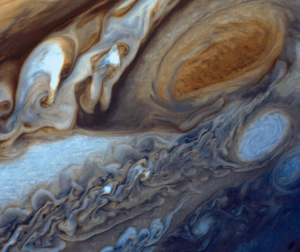 July 4, 2016
(Editor’s note: Below is a special 4th of July guest editorial by geologist Kemp Woods, who has been studying the nature of Jupiter’s atmosphere for over four decades. As a nod to today’s arrival of NASA’s Juno craft at the giant orb, as well as a salute to the upcoming summer Olympics, we present Mr. Kemp’s observations regarding the potential of finding water and some form of life on our Solar System’s “planet on steroids.” — Agnett Bonwit)

Juno at Jupiter: Water and Life

NASA’s Juno orbiter will reach Jupiter today, sliding into a polar orbit as it gets poised to collect data on the “gas giant’s” atmosphere, composition, layering, and much more.  The craft is expected to provide insights into the top 400 miles of the giant planet’s upper-most “cloud” band, including the nature and localities of Jovian water. These surveys and their results should be quite exciting. 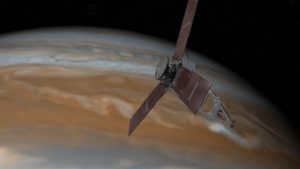 NASA’s Juno craft will use a microwave sensor to detect the presence of water as it orbits 2,600 miles above Jupiter.

Which brings me to writing this brief essay concerning the existence of water and life on this “gas giant.”  Actually, to call Jupiter a “gas giant”  seems a bit inaccurate, considering we really don’t know what hides beneath those intricate, colorful, and magnificent clouds. Yet to this day I never hear of water nor life being possible on old Jove –scientists think it’s only the moons that may have these!  I must object for the following reasons: 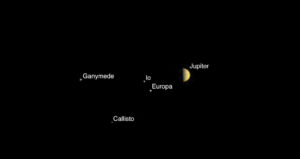 Photo of Jupiter and its four biggest moons taken by the Juno spacecraft on June 21st at a distance of 6.8 million miles from the Jovian system.

#1: If any planet pulls in water Jupiter must be drenched with it. The comets, asteroids, and moonlets that have been sucked into the massive planet over billions of years would supply plenty.

#2: Jupiter’s  lightning storms are monumental and make Earth’s storms appear puny. Water, in copious amounts, accounts for this.
#3: The Shoemaker-Levy comet, which split into dozens of impacting pieces, dredged up huge plumes of water.
#4: With all this water that has been trapped below the visible surface, you might wonder where it lies within Jupiter’s cross-section. For over forty years I’ve seen in the scientific literature findings of liquid hydrogen and helium layers, electric hydrogen and helium, a core, but no vast oceans of water. So where does the water go? Turn into steam? I think not. And what about the oxygen in water? Oh yeah, no mention of that either!!! 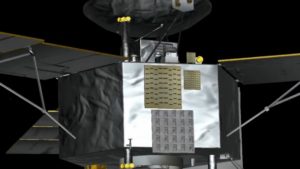 Juno’s Microwave Radiometer instrument will study the structure, movement, and chemical composition of Jupiter’s cloud cover to a depth of about 550 km, and will help determine the abundance of water and ammonia in the Jovian atmosphere.

These are but a few reasons to expect oceans of liquid water on this beautiful  planet.  Consequently, with water comes the inevitable chance of life.  Here’s what I believe: 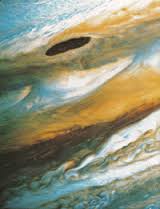 Jupiter’s upper atmosphere as seen by the Galileo probe, October 4, 1995

#1: Since Jupiter is the largest planet, it’s hard to imagine it not having life of at least microbial size. (I dare say macrobial life.) While scientists often go on about life to be found in the acidic, cooler, parts of Venus’ atmosphere–Jovian lifeforms are a better bet.

#2: The colors and complex interactions of Jovian clouds surely look like the forces of life at work.
#3: Jupiter’s immense radiation belts would secure a safe environment for life.
#4:  Jupiter is a heat emitter–there’s bound to be a wide zone for life to thrive.
#5:  Life is found abounding on Earth, even in extreme environments.
Ok. I’ve said enough for now–Juno will be relaying it’s results for many months to come.  We watch for now.