Through a House Bill, Darkly 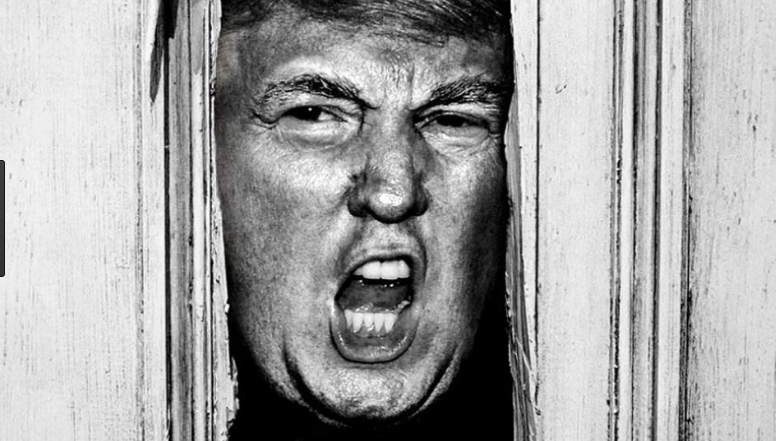 We didn’t think it could get more bizarre, yet in a week’s time, we are on the brink of a Constitutional crisis worse than Watergate. 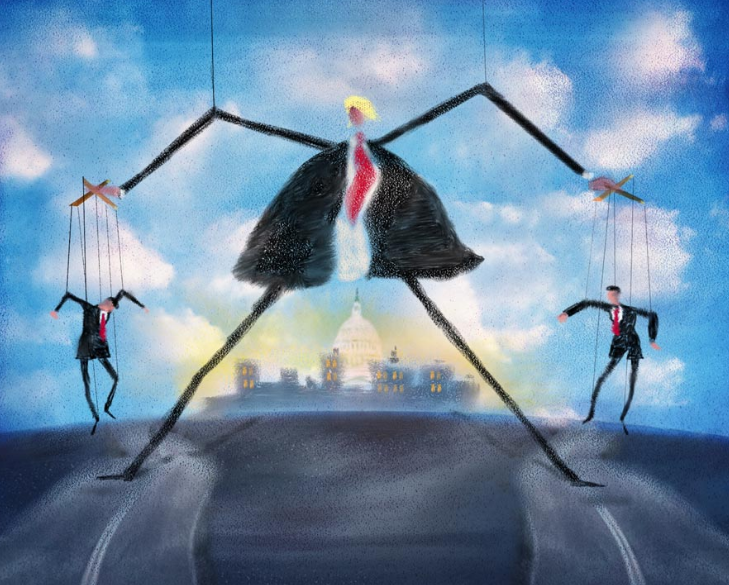 The Psychopath-Narcissist-in-Chief fires the man leading the investigation into his criminal and treasonous arrangements with Russia; and then his hand-picked Himmler-midget Attorney General Jeff Sessions not only breaks his oath to recuse himself from that clusterfrack, but he also announced on Friday to re-instate the moronic War on Drugs by prosecuting pot-smokers with life sentences again, and refilling the prisons, once again – undoing the progress so boldly commenced by President Obama and former AG Eric Holder. Is it any wonder?  After all, there is a direct connection between Republican campaign coffers and the private prison conglomerate and the U.S. prison guard union.   Will these morons ever realize that prohibition only begets violence and criminality??

Ah well.  We here at the Galactic Sandbox won’t be bothered by this week’s national political pettifoggery.  But we will concern ourselves with the latest political stink bomb fobbed at this planet’s environment.  Specifically, our thumbs-down vote goes to the latest GOP attempt to abolish the Environmental Protection Agency.  Yeah, that’s right. In fact, the world is just now learning that in February, Florida congressmen Matt Gaetz (R-Dante’s Inferno) introduced to the House Science, Space and Technology Committee the bill which he shamelessly admits is an out-and-out wipe-out of the EPA.

Think about it, though: Gaetz, plus four other GOP “freedom caucus” Tea-anderthals who co-sponsored this abomination, have been trying to shove this through the right-wing-heavy Congress for the past three months.  In the meantime, the hits keep coming as: 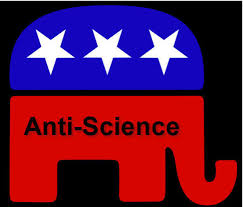 It’s been said by far greater thinkers than myself that Pruitt et al are trying to dismantle the EPA and all environmental safeguards piece-meal.  They are trying to murder the 50-year-old Clean Air and Clean Water Acts via death by a thousand cuts, not by the simple quick shock of cut throats.  (The optics would not favor that.) That’s why I figure only now media outlets are finding out about the Kill EPA Bill, that it has been darkly slumming around DC since last winter. 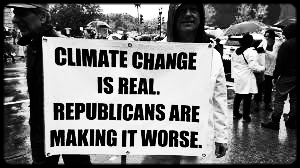 If nothing else, remember this… it is something that GOP elected bastards, especially the newest ones, somehow miss, even when and after they swear an oath to “uphold and protect the United States Constitution”… and it is this:  Will there ever be a time when these Trumpenfuhrer loyalists realize that they are traitors to the notion of democracy, that their unwavering party-pulling line is detrimental to the health, safety and welfare of this nation and the Earth??  It is that last clause they so cavalierly deny and turn their backs to that we, as a civilization on the brink of totalitarianism and/or destruction, can never forget.

In the meantime, sign this petition to let yer lawgivers know you do not dig erasing the EPA.

But First, a Year of Hell

NASA now says they want to put astronauts in orbit around the Moon for a year before blasting them off to Mars in the 2030s.  At the Humans to Mars Summit held last week in Washington DC, a NASA spokesman said that the four-part plan to get to Mars will begin in 2027 with placing a crew to cislunar orbit first, for a year, on the Deep Space Transport system, before beginning the 1,000-day voyage to Mars and back.  But before any of that happens, NASA has to spend a few years getting stuff up to lunar orbit on its 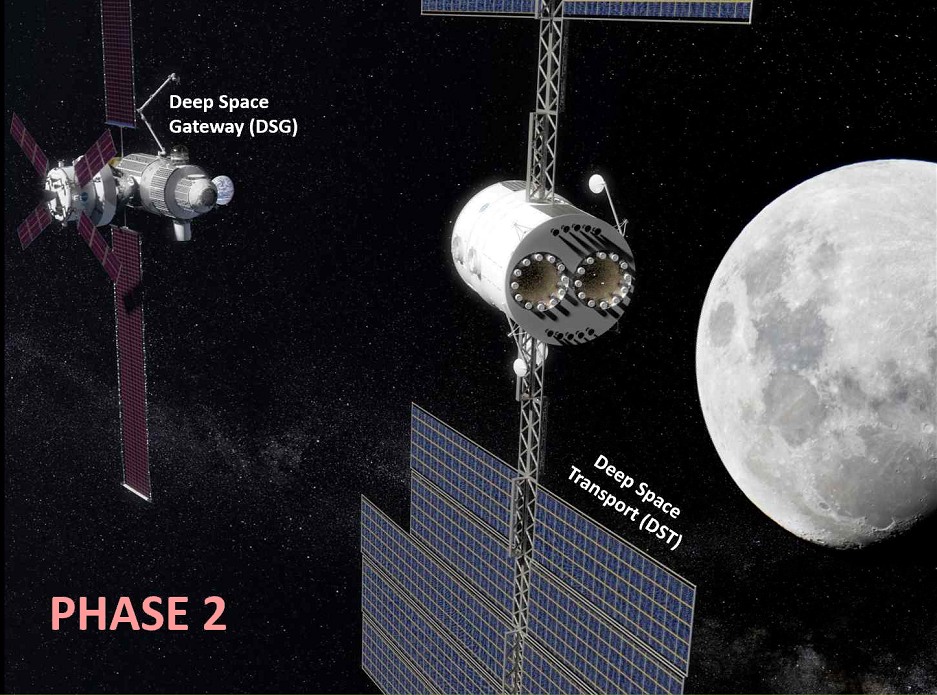 new super-duper Space Launch System – which just got pushed back, again.  Trump’s White House told NASA to put humans on the SLS maiden voyage – which is not only moronic but unnecessarily reckless – and NASA looked into it, but said publicly on Friday that, ah, no, it ain’t gonna happen that way. The first unmanned launch of the SLS is now moved up a year to 2019. 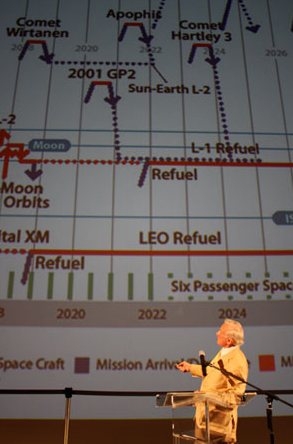 Apollo 11 moonwalker Buzz Aldrin has called on NASA to hand over the International Space Station (ISS) to private hands such as Space X, Boeing, and Blue Orbital so the space agency can focus its energies on human interplanetary missions to Mars and other extraterrestrial locales. “We must retire the ISS as soon as possible,” Aldrin said at the 2017 Humans to Mars conference in Washington, D.C. this week reports the Houston Press. “We simply cannot afford $3.5 billion a year of that cost.” The octogenarian, who believes NASA is wasting precious resources in low-Earth-orbit, peddled his his own plan to get humans on Mars, based on the concept of “cycling pathways,” a sort of space-age Silk Road in which spacefaring Earthlings and equipment hitch rides on rocketships constantly shuttling between Earth and Mars.. These celestial express routes would first be established between the Earth and the Moon to easily settle a lunar colony where trans-solar system living can be tested and developed. The next “evolutionary development” would be to expand the cycler space-based highway to a near Earth asteroid by 2020, then on to a landing on Venus by 2024, and finally to a permanent human presence at the Red Planet by the 2030s.

Workers of the Universe Unite 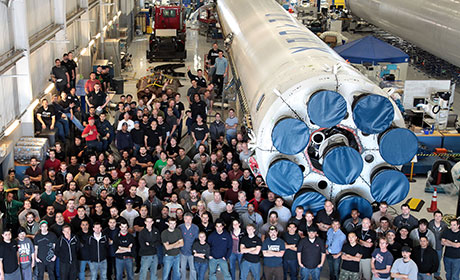 Wonder Boy Elon Musk’s Space X corporation just got bitch-slapped when they lost a class-action lawsuit this week.  Seems Musk forgot to pay his employees at the Hawthorne, CA plant for their government-mandated breaks.  (The Hawthorne headquarters is where the company manufactures its swimmingly successful Falcon 9 reusable rockets.)  According to Inverse publication, $4 million will be paid to some 4,100 employees who say the company refused to allow them to take legally mandated breaks during the workday. “Each worker will get about $500 – with the highest payouts coming out to about $2,000 per person.”  But here’s the bigger rub: one third of that payout – about $1.3 million – will go to the plaintiffs’ lawyers.  No justice, no peace. 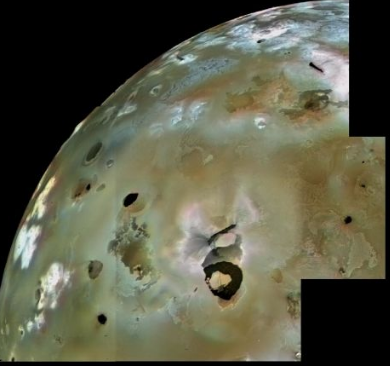 Boasting the latest advances in land-based imaging technology and “adaptive optics,” astronomers announced Friday in the publication Nature that they have used the Large Binocular Telescope perched atop Arizona’s Pinaleno mountains to detect two massive lava waves undulating around a volcanic crater the size of Lake Ontario on Jupiter’s pockmarked moon, Io. While the scientific observation in itself is significant, what’s stunning is that professional star-gazers from the (relative) comfort of terra firma can now – at least for solar system observations – rival findings from space-based instruments like the Hubble Telescope, and identify cosmically tiny features 391 million miles away on a Jovian satellite approximately the size of our own.  This new-fangled wizardry enabled cosmologists in

March 2015 to take snapshots of a rare orbital alignment in which Jupiter’s icy moon Europa gradually eclipsed the volcanically-active Io, blocking more and more light emanating from the magma-filled Loki Patra crater (see gif on right). From this data, researchers were able to create a “heat map” indicating how the temperature varied across the basin, revealing one lava wave moving clockwise and the other staring from a different direction swirling counterclockwise. 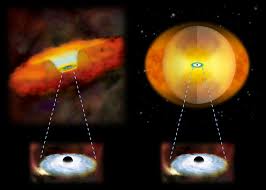 Star scientists have recently concluded that supermassive black holes are not as indiscriminately voracious as once thought – or at the least, their perceived rapacious “consume all and anything” reputations could never hold a candle to Republican congressmen seeking re-election.  Astronomers started to change their tunes about black holes some years back, but it became a lot more convincing recently after they observed a slew of galactic head-ons merging into one another when they realized that it takes a ginormously disruptive event to make the humongous critters to get sufficiently provoked, and thereby hungry.  Using their NuSTAR space telescope, NASA brains studied 52 galaxy collisions and concluded that it was in the late stage of the smash-ups that galactic black holes got hot and bothered and then started gobbling what was orbiting them. 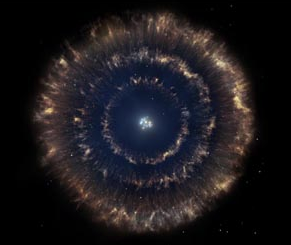 For illustration purposes only.

Adding to your list of existential fears including Donald Trump ordering a nuclear strike instead of a Coke or a giant asteroid walloping our planet, researchers now believe the “kill zone” in which a supernova could cause mass extinctions on Earth is probably 50 light years wide instead of the previously calculated 25, reports Space Daily. Or at least this is an estimate made by brainiacs at the University of Kansas in a follow-up to their 2016 report regarding the effects of supernovae on Earth’s biology and the “slam dunk” evidence that radioactive debris from an exploding star rained on our planet some 2.6 million years ago. According to KU scientist Adrian Melott, while the isotopic shrapnel from a spent sun that bombarded Earth originated a relatively safe 150 light years away, we wouldn’t be so fortunate if such a cataclysm occurred much closer:

People estimated the ‘kill zone’ for a supernova in a paper in 2003, and they came up with about 25 light years from Earth … Now we think maybe it’s a bit greater than that … We don’t know precisely, and of course it wouldn’t be a hard-cutoff distance. It would be a gradual change. But we think something more like 40 or 50 light years.

That said, it’s probably not something not worth losing sleep over. According to Atlasoftheuniverse.com, there are “only” 133 stars located within a 50 light-year radius of the Earth, so while the potential exists that life on Earth could be obliterated by a gas ball blowout, the probabilities within our lifetime is pretty low. So sweet dreams – sort of.

Through Many Lenses, Brightly 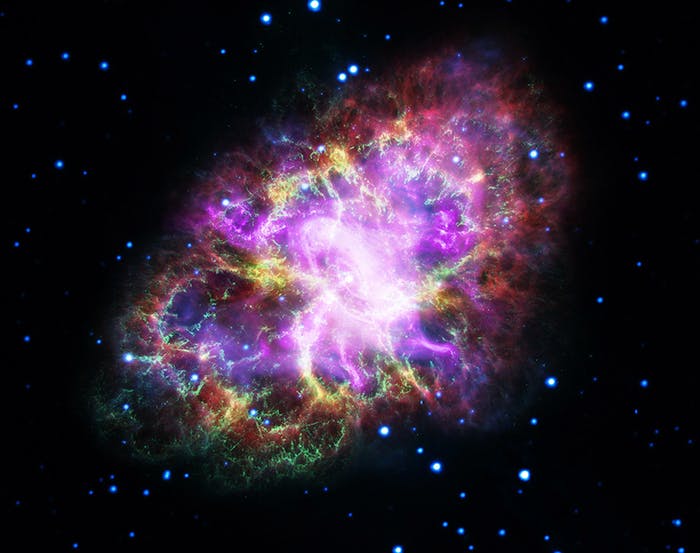 new view of the Crab Nebula, and to see it in this new light is spectacular.  The agency combined photos from an array of their space telescopes set on the same angle of the massive cloud of dust and gas that resides 6,500 light-years away – and the group effort is decidedly out of this world.  NASA achieved the new view of our neighbor by layering pix from the Spitzer Space Telescope, and of course the Hubble Space Telescope, the XMM Newton to capture ultraviolet waves and the Chandra Space Telescope to grab the X-Rays.  The result, as one can see, is quite stunning.  The good ol’ Crab Nebula is part of the “Local Group” of galaxies orbiting our larger Milky Way Galaxy, and its sun  supernovaed in 1054 A.D.  We thank Dog that Chinese astronomers observed and documented it while the tribal Anglo-Saxons were still bickering about the Battle of Hastings.