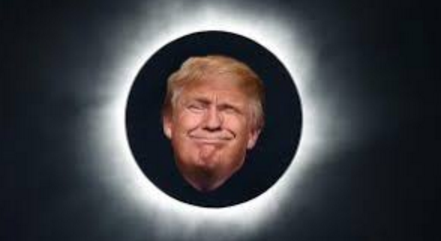 While preparations in the US reach a fevered pitch in advance of the “Great American” Solar Eclipse on August 21st, some astrologers (yes, you read that right) are pouring over their charts and concluding that the celestial event could have disastrous implications for Donald Trump’s presidency. “There’s been a lot of conversation about this eclipse in terms of what’s going on with Donald Trump,” says Wade Caves, an astrological consultant who in July  published a 29-page “analysis” of this month’s eclipse. “The astrological world has been completely buzzing with this for quite some time, even more so since Donald Trump was inaugurated.” Modern-day astrological practitioners point out that Trump was born during a lunar eclipse (when the Earth casts a shadow on the Moon), making him susceptible to the power of eclipses, which they believe have monumental impacts on mere mortals. 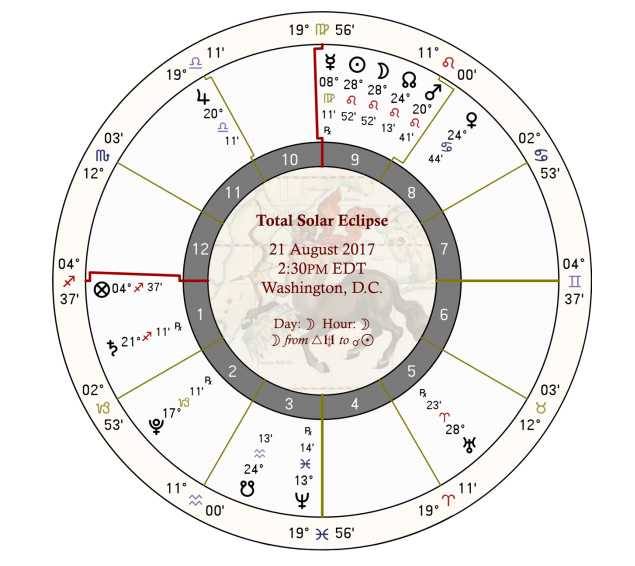 “What we’re talking about is the ability of the sun to be able to give light and life-generating heat, and all these things being momentarily taken away,” says Caves, the astrological consultant. “So there’s this symbolism that’s built in with eclipses about…things coming to a close, and in often a very dramatic fashion.”

“At the moment that he was born, certain degrees were activated. This eclipse is activating those same degrees,” Caves says about Trump. When other features of the event are taken into account, he adds, “a lot of astrologers are expecting some kind of downfall, some kind of ruin, some kind of difficulty.”

(Hmm… if you ask us, it doesn’t take an astrologist, psychic, shaman, or clairvoyant to see that our Lunatic-in-Chief has long been eclipsed by a host of other factors in his ability to truly lead in any capacity.) 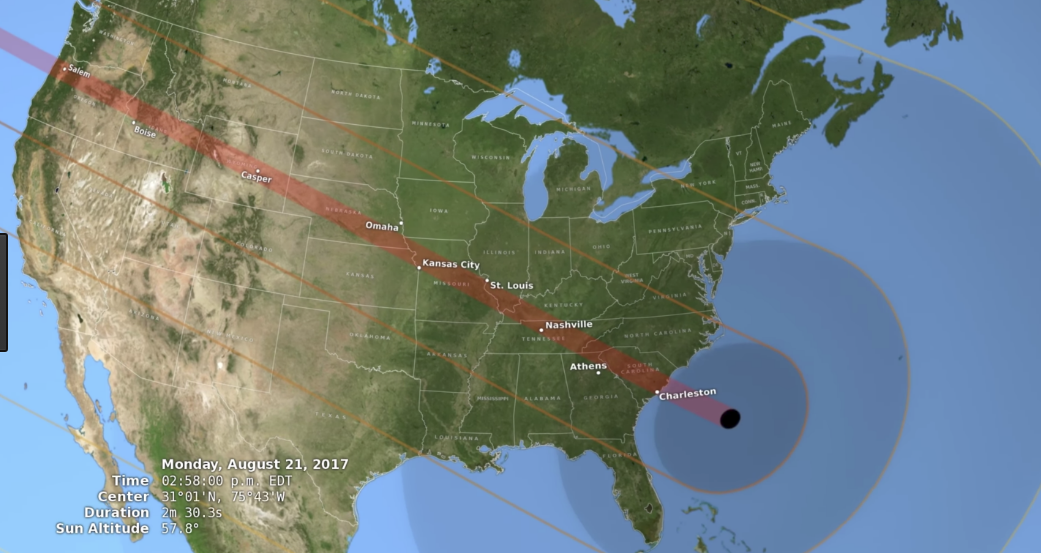 Meanwhile, authorities from areas falling under the eclipse’s path of totality are increasing their own disaster-level preparations with as many as 7.4 million astronomical devotees expected to cram into the 70-mile swath of land stretching from Oregon to South Carolina, creating emergency evacuation-like scenarios that include clogging interstates, state, and local roads for days before and after the 21st, says Brad Kieserman, vice president of disaster operations and logistics for the American Red Cross. “Some of these places are never going to see traffic like this,” he told Newsweek, adding that in some areas, “the population will be double or triple.” 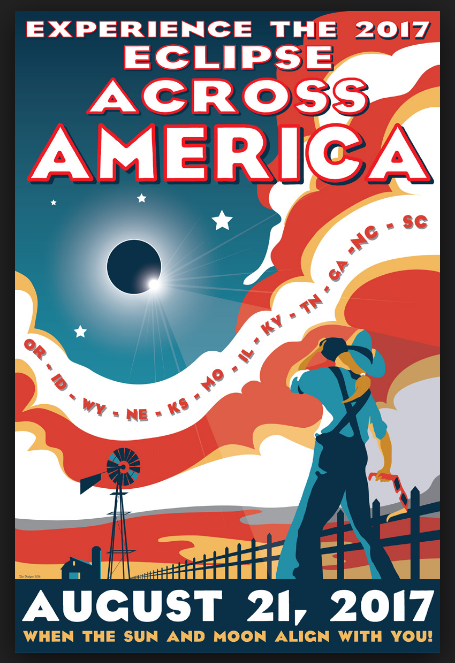 Local resources also will be stretched razor thin, with local planners stocking extra water bottles and ordering auxiliary port-a-potties (creating what some fear may be a national port-a-potty shortage). Not to be left out, the Red Cross is preparing hundreds of emergency shelters in case of non-eclipse related catastrophes, and hospitals are stocking up on medical supplies since such materials may be difficult to deliver due to visitor-choked roads. Also, don’t expect to broadcast the celestial spectacular live on your blog from the total eclipse zone because cellphone, GPS and smartphone internet services will likely be nonexistent there since cellular service towers will be overloaded due to the additional half-million to a million people per state.

In other words – to all eclipse adventurers: Don’t wing it. Come prepared for delays, shortages, and LOTS of people.

Editor’s note:  Stealing a cue from La-Z-Boy-in-Chief, we are taking the next two Mondays off, and will return on August 28th. Part of that time, we plan to forgo the golf links and will be covering the total eclipse from an undisclosed location looking for a port-a-potty and a sign – any sign – that the Trump presidency will be over soon.

Recently, astronomers were astonished to observe a massively-bright storm located at Neptune’s equator that’s nearly the size of Earth.  The disturbance, about 6,000 miles in diameter, is rare for its luminosity and low-latitude location, said UC Berkeley grad student Ned Molter, who spotted it between June 26 and July 2 this year from the Keck Observatory in Hawaii. “Seeing a storm this bright at such a low latitude is extremely surprising,” Molter said, adding that “Normally, this area is really quiet and we only see bright clouds in the mid-latitude bands, so to have such an enormous cloud sitting right at the equator is spectacular,” Since telescope viewing time is competitive, Molter will have to get back in line and wait until this fall to set his sights on Neptune again, hopefully gaining further insights on nature of the mysterious system and the gas planet’s atmosphere that could also advance the understanding of giant exoplanets too far away to be spied on by Earth-bound instruments.

Out with the New, In with the Old 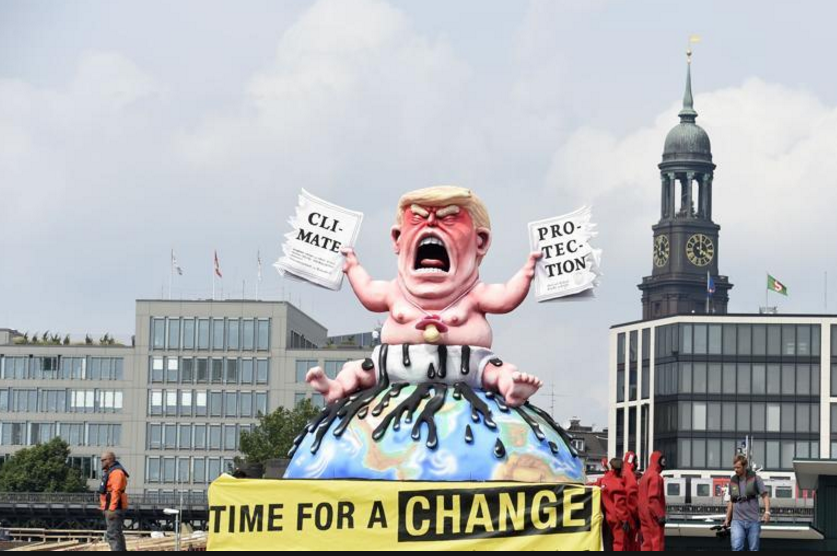 In typical twelve-year-old Trumpian fashion, the US government via the State Department delivered a written notice to the UN last Friday of its official intention to the exit the Paris climate accord (two years too early) while at the same time reserving the right to reverse its position, and demanding a seat at the table at all international climate-change negotiations “to protect U.S. interests and ensure all future policy options remain open to the administration. Additionally, the State Department missive said the US “will continue to reduce our greenhouse gas emissions through innovation and technology breakthroughs, and work with other countries to help them access and use fossil fuels more cleanly and efficiently and deploy renewable and other clean energy sources” – a position we feel is laughingly on the wrong side of history. In fact, we couldn’t have articulated our disgust better than “bareshark1957” commenting on the New York Magazine site:

Occupant (and the Republican numbskulls who enable [Trump]) are throwing away America’s economic future with both hands. While he flirts with the nineteenth century (coal! oil! mercantilism! isolationism! xenophobia! Whee!) China will be eating our lunch in every facet of the new energy economy. They are already the biggest manufacturer of solar panels and wind turbines, they have stronger economic ties to Latin America and Africa than the US does now, soon they will make more batteries (for EVs and power storage) than the rest of the world combined.

Every day the bass-ackward class and their donors keep the fantasy of fossil fuels alive and obstruct renewables, is one more day the US will be playing catch-up when the dime finally drops …

(I know that many companies in the US are trying to move in the right direction, but they are dealing with two problems companies in other countries don’t have: active government opposition, and very little government investment.)

The Heat is On 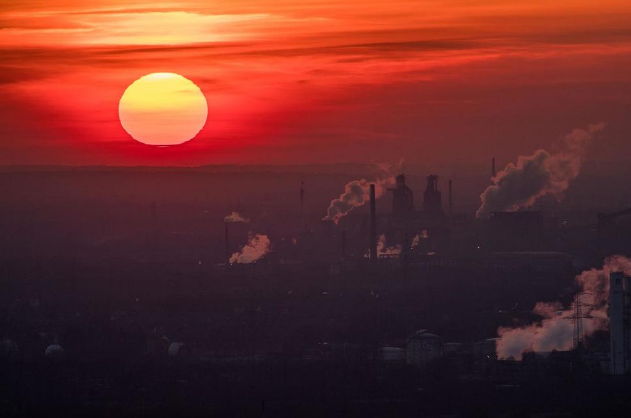 And while the “Grim Tweeter” continues dithering with the delusion of “clean” fossil fuels, scientists and economists are redoubling their urgent pleas with the Trump administration to take immediate countermeasures in the light of two new reports confirming previous findings that the Earth’s temperature will likely climb two degrees Celsius by 2100. Specifically, alarmed parties are calling on the federal government to invoke carbon pricing and invest in carbon capture technologies to possibly retard the process of global warming, as well as establishing measures to thwart inevitable temperature rises. The just-released reports, published in the scientific journal Nature Climate Change, build on the existing climate change research, and demonstrate that “we have to move even faster,” said Michael Mehling, deputy director of the Center for Energy and Environmental Policy Research at MIT.  “The trend overall has been us underestimating climate change,” he said, adding that “Each new study has been more and more sobering.” 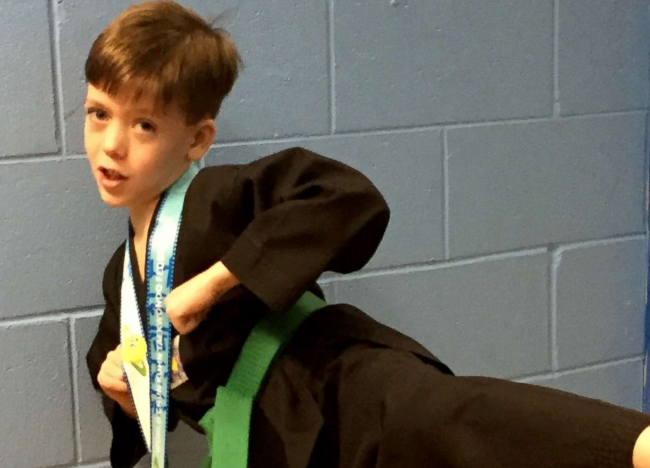 NASA is reeling a bit from the attention given to its recent job posting for a Buck Rogers-sounding  “Planetary Protection Officer” position, which sparked the dreams of 9-year-old Jack Davis from New Jersey, who wrote the space agency a handwritten note, claiming despite his age, he was “fit for the job.”  “One of the reasons is my sister thinks I’m an alien,” Jack wrote, adding that his qualifications include seeing “almost all the space and alien movies I can see.” The third-grader concluded his case by reminding the agency of his “great” video game skills and and his youth, making it easy to “learn to think like an alien,” signing the letter, “Jack, Guardian of the Galaxy.” 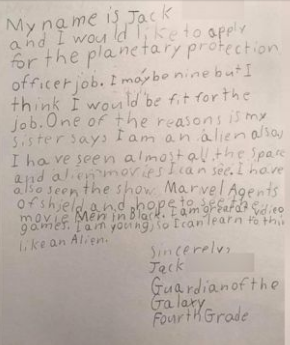 And before you could say, “to infinity and beyond,” James Green of NASA’s Planetary Science Division responded to Jack’s inquiry telling the youngster that the “position is really cool and is very important work,” adding that “It’s about protecting Earth from tiny microbes when we bring back samples from the Moon, asteroids and Mars.”   According to Green’s response obtained by ABC News, the post – created in the 1960s – is “also about protecting other planets and moons from our germs as we responsibly explore the Solar System.” Green told Jack that he hopes he will “study hard and do well in school,” and that “We are always looking for bright scientists and engineers to help us….We hope to see you here at NASA one of these days!”

Well, if NASA isn’t going to nab this kid, we know of another executive government position in desperate need of a level head, a willingness to work hard, and the ability to kick the butts of Russian oligarchs and planet-killing fossil-fuel pushers.