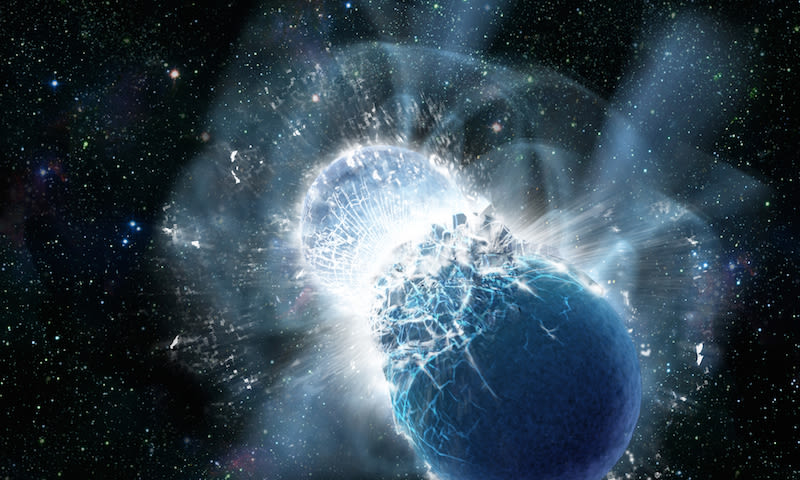 In what is being hailed as a new era of astronomy by an army of cosmologists, scientists for the first time have directly detected both gravitational waves and energy covering most of the electromagnetic spectrum of the same cosmic event – the

“spectacular collision” of two neutron stars. Scientific dividends from the discovery are still pouring in; however brainiacs are already gushing how this once-in-a-lifetime phenomenon has increased their understanding of the nature of short gamma ray bursts, as well as given them the clearest explanation to date on how heavy metals are produced in the universe. 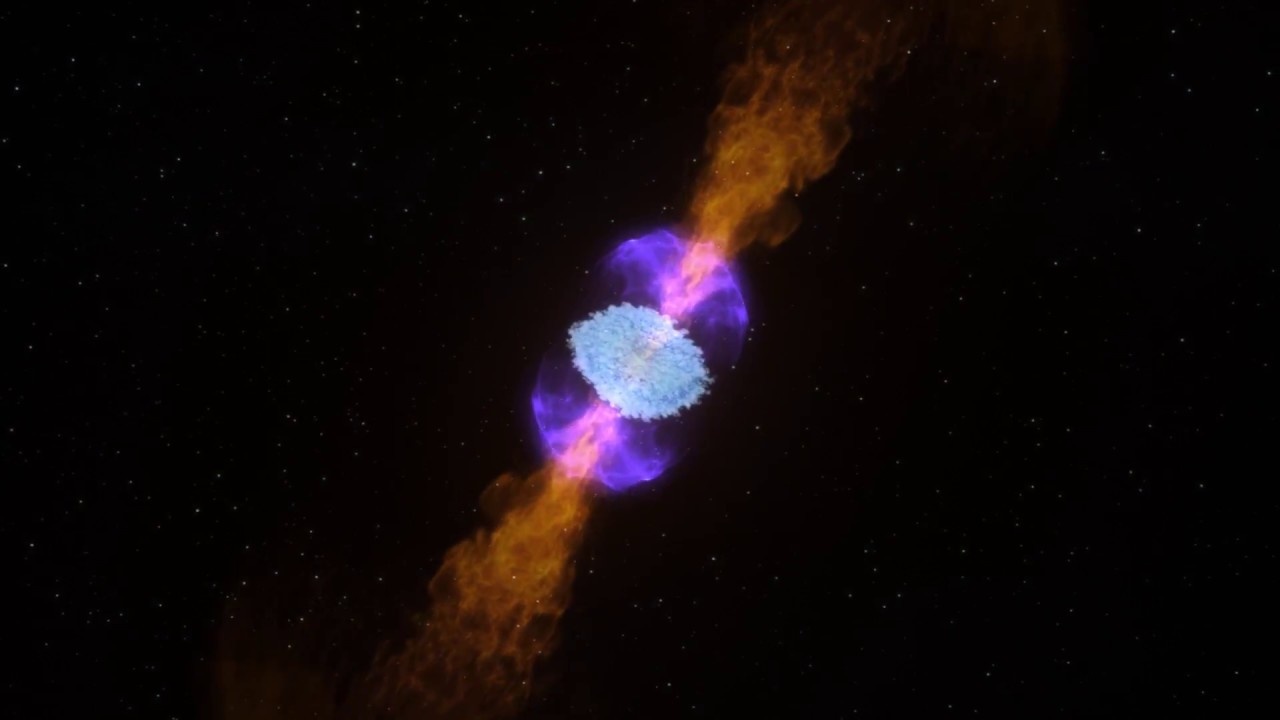 Gravitational waves and then gamma ray bursts were detected for the first time on August 17, 2017 in what is called a “kilonova,” or the merging of two super dense neutron stars.

The sighting was also a huge feather in the cap of the US-based Laser Interferometer Gravitational Wave Observatory (LIGO) and the European-based Virgo detector, as well as a gaggle of 70 ground- and space-based observatories that joined in an unprecedented opportunity of global collaboration.

“It is tremendously exciting to experience a rare event that transforms our understanding of the workings of the universe,” says France A. Córdova, director of the National ScienceFoundation (NSF), which funds LIGO.

According to the LIGO-Virgo results published last week in the journal Physical Review Letters; on August 17th this year, two identical LIGO detectors, located
in Hanford, Washington, and Livingston, Louisiana, in addition to the Virgo detector situated near Pisa, Italy, picked up the gravitational waves – or ripples in spacetime – caused by the cosmic smashup of two tiny, super-dense neutron stars (dubbed GW170817)  that occurred 130 million years ago in the elliptical galaxy NCG 4993  that many light years from Earth (a neutron star, which is generally only 12 miles in diameter, is so compact that a teaspoon of its material has a mass of about a billion tons). 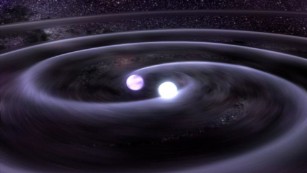 As these neutron stars corkscrewed together, they belched out gravitational waves lasting 100 seconds, followed by a flash of gamma rays two seconds later. According to the LIGO Scientific Collaboration, in the following days and weeks, other forms of electromagnetic radiation — including X-ray, ultraviolet, optical, infrared, and radio waves — were also spotted. 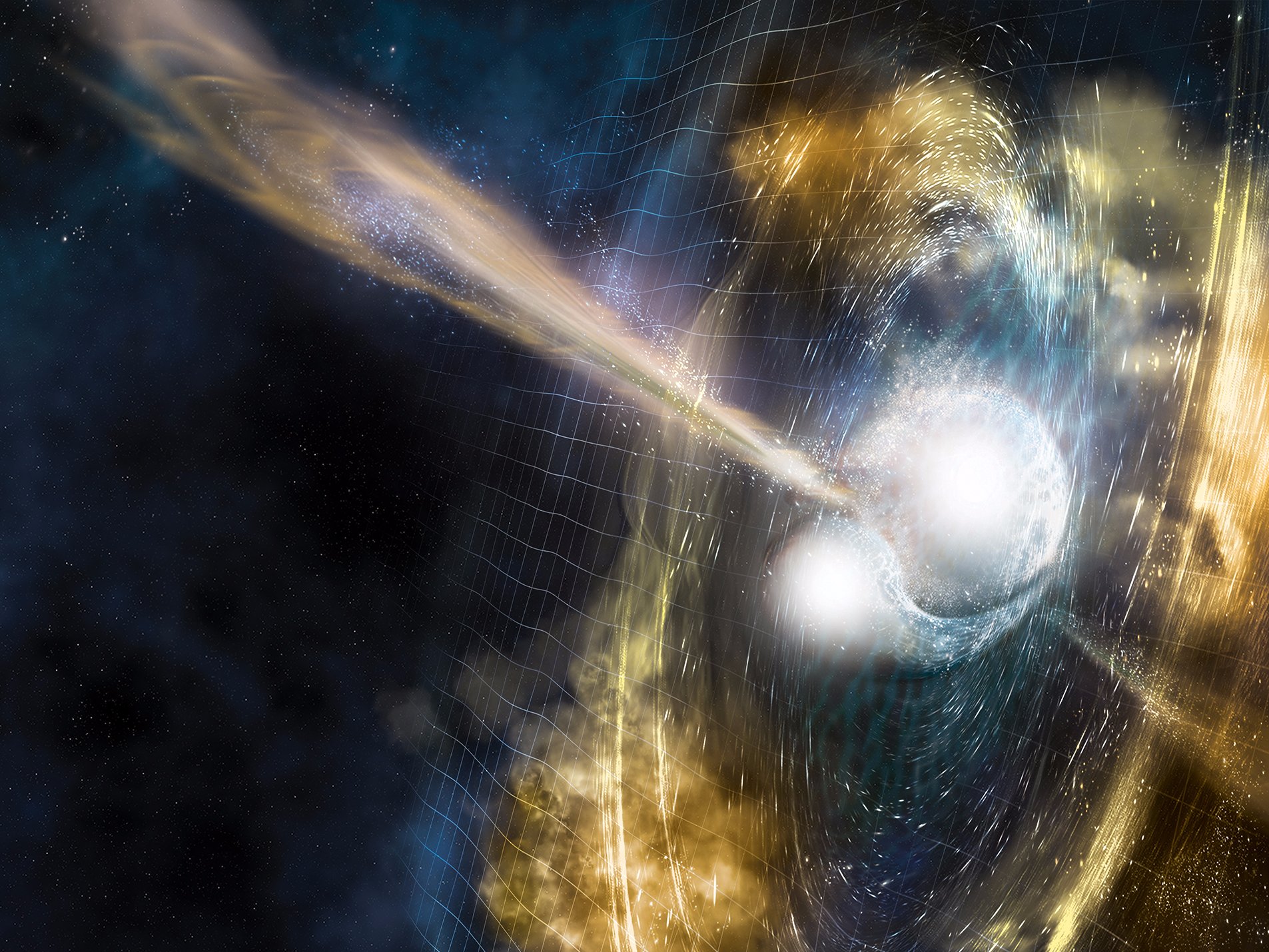 In additional to what is the astronomical equivalent of having snatched a great white whale, what has made all these researchers giddy is that having the unparalleled opportunity to view two colliding neutron stars has provided them the key to unlock some of the nagging mysteries of the universe.  For instance, observations made by the U.S. Gemini Observatory, the European Very Large Telescope, and the Hubble Space Telescope have revealed “signatures of recently synthesized material,”  including gold and platinum (worth approximately 100 octillion dollars in today’s market prices), solving a longstanding conundrum of where about half of all elements heavier than iron are produced. In addition the European Space Agency’s gamma-ray observatory INTEGRAL, was able to confirm that at least some short gamma-ray bursts are spawned by the mingling of neutron stars — something that was only theorized before.

“From informing detailed models of the inner workings of neutron stars and the emissions they produce, to more fundamental physics such as general relativity, this event is just so rich. It is a gift that will keep on giving,” said David
Shoemaker, spokesperson for the LIGO Scientific Collaboration and senior research
scientist in MIT’s Kavli Institute for Astrophysics and Space Research.

Many thanks, Randall Munroe, xkcd. 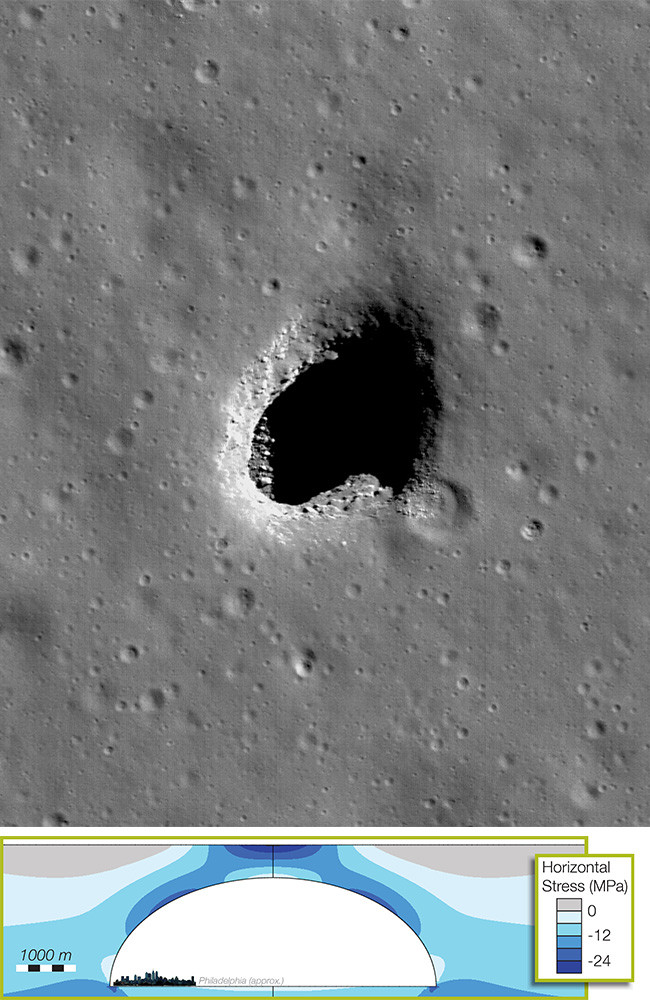 Japanese scientists found a huge underground volcanic cavern potentially several kilometers in length — and at least one kilometer in height and width – near the Moon’s Marius Hills “Skylight.”

A massive network of lava tubes found beneath the Moon’s surface could be large enough to accommodate a lunar colony the size of several large Earth cities, according to a study by Japanese astronomers published last week in the science journal Geophysical Research Letters.  In fact, a mammoth open lava tube, found in the Moon’s Marius Hills region, could provide a ready-made shield against human-killing space radiation say researchers from the Japanese space agency JAXA (take note NASA scientists who are dreaming of creating Frankenastronauts to make them impervious to electromagnetic energy found in deep space). “It’s important to know where and how big lunar lava tubes are if we’re ever going to construct a lunar base,” says Junichi Haruyama of JAXA that operates the Japanese lunar orbiter SELENE, which along with NASA’s GRAIL gravitational field mission, was designed to find the underground volcanic lunar structures. According to the scientists who are looking for additional smaller lava conduits, the recently-discovered tunnel will need to be mapped and scanned by a future robotic probe mission to accurately determine its size and condition. Fans of the dwarf planet Ceres have a renewed season of scientific binging to look forward to now that NASA has given the green light for a second extension of the Dawn  mission currently parked in orbit around the largest – and enigmatic – asteroid between Jupiter and Mars. According to NASA, the Dawn probe, which has been circling around Ceres since March 2015, will be placed in a new elliptical orbit that could take the spacecraft just 120 miles from the orb’s surface – about half the distance of the closest encounter to date. In fact the spacecraft is expected to remain in its final, stable orbit indefinitely after the newest scientific investigation ends and its hydrazine fuel runs out. In addition to its extended imaging and mapping studies, the probe will be online as Ceres reaches its closest approach to the Sun (or perihelion) in April 2018 at which time a significant portion of ice on Ceres’ surface may turn to water vapor, and create a thin atmosphere similar to one detected by European Space Agency’s Herschel Space Observatory before Dawn’s arrival a few years ago. 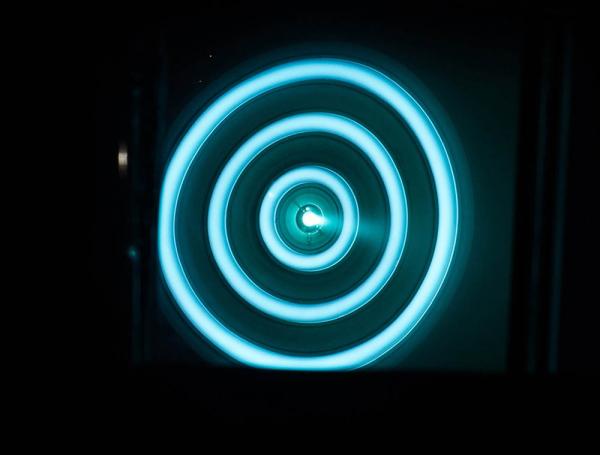 While NASA held a PR party last week to show off the test of its old-school, heavy-lifting RS-25 rocket engines that are planned to someday power the space agency’s SLS rocket designed to launch humans to Mars, a group of researchers at the University of Michigan working with NASA unveiled a new ion-based “X3” thruster capable of propelling spacecraft eight times the speeds of chemical-propulsion rockets. “You can think of electric propulsion as having 10 times the miles per gallon compared with chemical propulsion,” said Alec Gallimore, leader of the X3 project, who added, “We have shown that X3 can operate at over 100 kW of power. It generated 5.4 Newtons of thrust, which is the highest level of thrust achieved by any plasma thruster to date.” Instead of igniting highly flammable rocket fuel, ion engines vibrate plasma atoms resulting in a blast of energy that creates – compared to what we have now – phenomenal speeds.

Cradle May Have Fallen 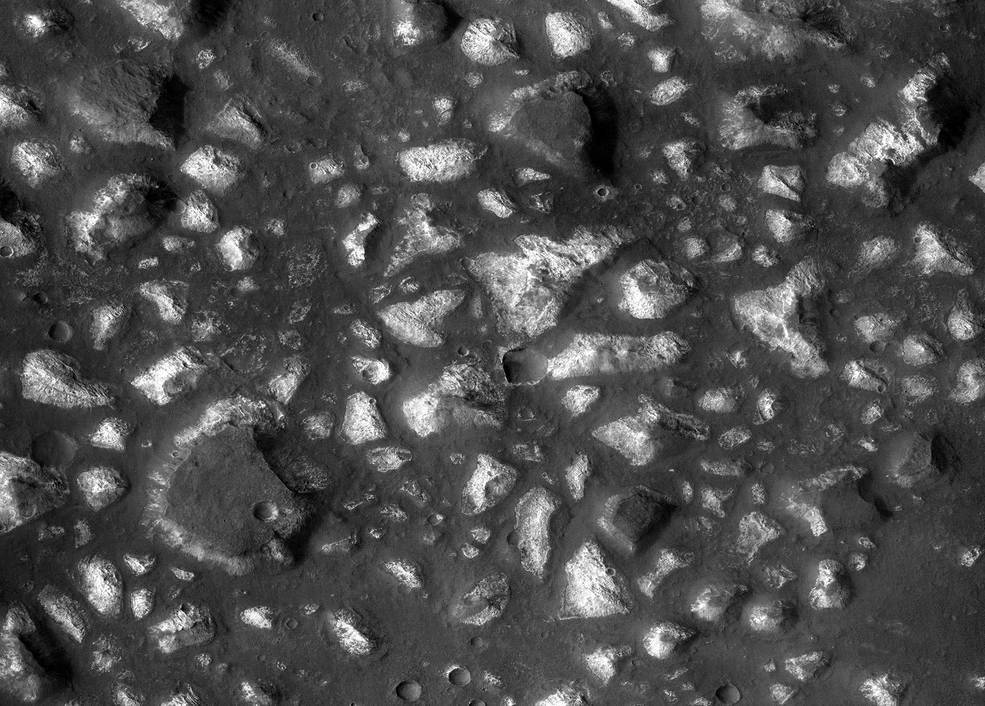 An analysis of data from NASA’s Mars Reconnaissance Orbiter indicates that undersea hydrothermal activity on Mars may have been present about 3.7 billion years ago at the same time similar conditions were present on Earth where life may have emerged. Based on the recently-released international report, this cradle-of-life scenario on the Red Planet has been strengthened by what appear to be extensive deposits found in a basin on southern Mars that are being interpreted as evidence of heated water from volcanic activity located at the bottom of an ancient sea nearly 10 times as massive than all of North America’s Great Lakes combined.  “Ancient, deep-water hydrothermal 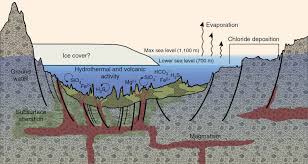 deposits in Eridania basin represent a new category of astrobiological target on Mars,” the report states. The researchers, however, don’t seem phased if their hunch turns out to be a dead end.  “Even if we never find evidence that there’s been life on Mars, this site can tell us about the type of environment where life may have begun on Earth,” said Paul Niles of NASA’s Johnson Space Center, Houston.  “It is evocative of the deep-sea hydrothermal environments on Earth, similar to environments where life might be found on other worlds — life that doesn’t need a nice atmosphere or temperate surface, but just rocks, heat and water,” Niles added. 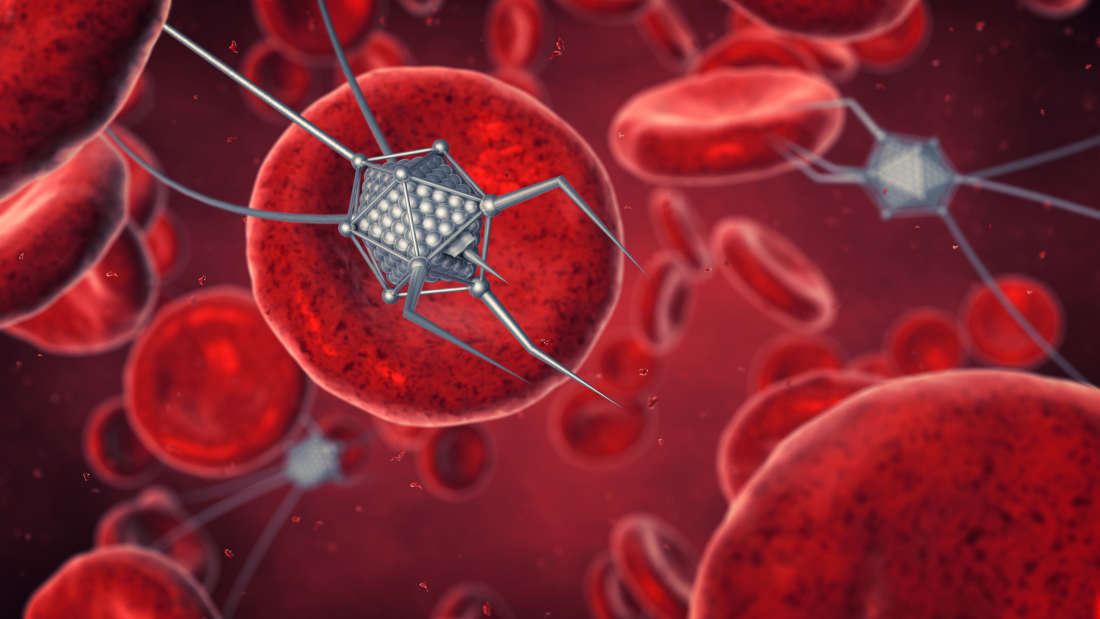 If a senior inventor at IBM is to be believed, the era of machine-enhanced humans may be closer to our doorstep than we think. According to John McNamera of IBM’s Innovation Center who recently briefed England’s House of Lords’ AI Committee, the next technological renaissance is just around the corner, and artificial intelligence-enhanced nanomachines used to augment human health and cognitive abilities will be a reality by 2040. “These [AI nanobots] will provide huge medical benefits, such as being able to repair damage to cells, muscles, and bones,” he told the UK lawmakers, adding that uber-tiny AI appliances could actually end up improving our original biological frameworks. “Beyond this, utilizing technology which is already being explored today, we see the creation of technology that can meld the biological with the technological,” McNamara points out, adding that 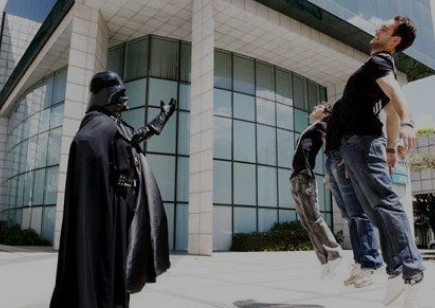 with an added bit of tech wizardry, we can “enhance human cognitive capability directly, potentially offering greatly improved mental [abilities], as well as being able to utilize vast quantities of computing power to augment our own thought processes.” And the Huxlian tentacles don’t stop there, as McNamera went on to suggest that nano AI could merge our brains to our environment, making us able to use our thoughts to control our homes, TVs, computers, etc.,  just like a Star Wars Jedi.

Problem is, the Jedis had Darth Vader too.