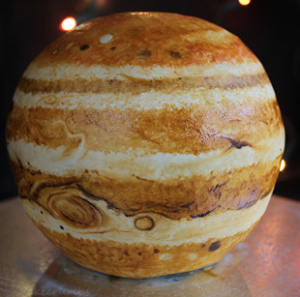 After that appetizing story, let’s have dessert!  Australian baker “Rhiannon” who runs a remarkable pastry blog, has offered a tutorial on how to build her latest invention, “Planet Cakes. “ The spherical confections are uncannily realistic models of the real deals, and have fairly accurate core layers once you cut into them.  Galactic Sandbox would truly like to see one done in Saturn’s likeness, but Saturn or no, we salute the talented

Rhiannon for her knowledge in Zoology and “fierce passion for wildlife conservation “– and her wondrous creations that make us want to move to Australia. 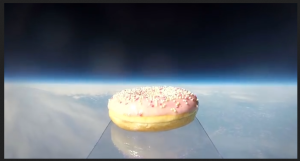 It’s happened.  One small step for donut holes, one giant leap for donut-kind.

Two brothers from Sweden now have bragging rights as the brain trust for launching the first donut into space.

The donut they launched last week on a weather balloon from Askim, Norway, had pink glaze and candy sprinkles.  It was videoed from a small platform on the balloon and downloaded here.

Popular Science reports that while the donut didn’t technically reach orbit, it did reach the edge of our stratosphere, 32 kilometers high.

Brothers Alexander and Benjamin Jönsson are from Lysekil, Sweden. But they launched their mission from Norway because it was easier to get the proper permits there – for a donut launch. 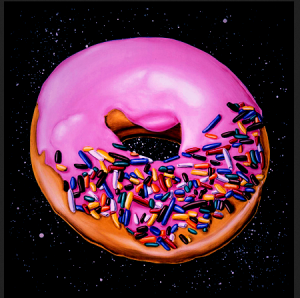 “We like to do odd things, and this felt very different,” Alexander told a local Swedish media outlet, The Local.  “It was really fun to watch the video for the first time. We could see the doughnut hovering above the Earth.”

A few hours after reaching the edge of space, the donut crash-landed into Sweden’s Lake Vättern, where the Swedish Sea Rescue Society retrieved it.  After posting the footage on the Internet, the brothers have received their 15 minutes of fame and are considering launching something else – what, is anyone’s guess – during a total solar eclipse to occur in the U.S. in 2017.

“But the thing is,” said Alexander. “How do you top a donut?”
A conundrum, for sure.