As NASA bid a fond farewell to its scrappy Messenger probe last month, the world was transfixed, not on the list of stunning scientific accomplishments over the past 10 years, but on the craft’s headline-grabbing, 8,700 mph crash landing into Mercury’s rugged terrain. While pandering to our collective inner Hulk, this Fast and Furious narrative – concocted by NASA and cloned by media outlets – effectively wiped any collective memory of why the pioneering spacecraft was built in the first place. This is nothing new – the mass media has been a delivery system of sensationalistic fixes for decades, providing little if no context to a story, leaving one shocked/entertained/titillated but ultimately uninformed.

We hope that Galactic Sandbox will serve as a refuge from the storm and act as an online clearinghouse for all things space-related, including scientific, commercial, educational, cultural, and other far-flung realms. While it is impossible to provide complete coverage on the infinite scope of any one story, our goal is to point you in the right direction and send you off on a happy voyage of further discovery and adventure. The good news is the information is out there – we want to get you there as quickly as possible.

In the meantime, before we forget, here is a list of some of the major discoveries gleaned 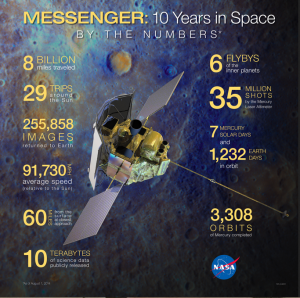 * The revelation of large amounts of water in Mercury’s exosphere.

* Visual evidence of past volcanic activity, as well as evidence for a liquid iron planetary core.

* Unexpected presence of high concentrations of Magnesium and calcium found on Mercury’s nightside.

* Scientists will no doubt continue for years making further discoveries from the volumes of information provided by Messenger, including over a quarter of a million photographs and 10 terabytes of science data that have been publicly released.