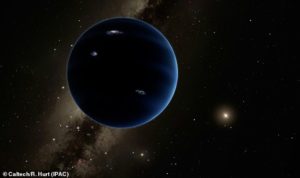 In only the second year of its five-year mission, the Dark Energy Survey (DES) is rip-snorting at full speed… and happens to be gazing at the sweet spot in the sky where fabled “Planet 9” could be – the super Earth 10 times bigger than our own that could be lurking near the edge of the Kuiper Belt some 2.5 billion miles away.

While astronomers bicker whether the behemoth “shadowy” planet exists or not, the Dark Energy Survey is spying at the area wherein the Cassini spacecraft rekindled the old squabble a few months ago as it detected a gravitational nudge, fueling renewed hope for the pro-Planet 9 cheerleaders and a bounty of glossy science magazine fold-outs in February and March.  The DES just might end the argument once and for all if it finds the seemingly invisible planet. 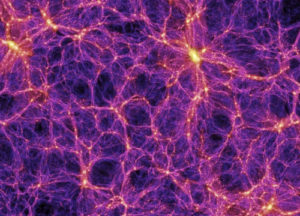 NASA says it is too early yet to confirm if Planet X exists or not.  Meanwhile, the Dark Energy Survey continues unmasking some mysteries for cosmologists, a big one being that the cosmos is flying apart much faster than previously thought.  The DES has helped create new massive catalogs of the distorted shapes (caused by gravitational lensing) of 24 million distant galaxies in what is now viewed as the “cosmic web” of our particular Universe. 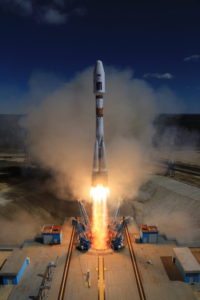 launch of a Soyuz 2.1a rocket toting three satellites into orbit. According to SpaceFlight Now, Russian President Vladimir Putin was on hand for the inaugural liftoff that was originally slated for broadcast live on the Russian space agency’s YouTube channel, but was actually streamed with a few-minute time delay. Ensconced in Russia’s Far East forests, the Vostochny Cosmodrome is that country’s first home-based spaceport that is intended to take over the bulk of “heavy lifting” activities from the Soviet-built Baikonur facilities located in Kazakhstan. 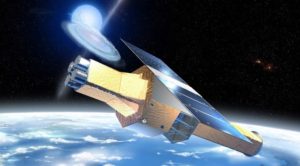 Believed to have lost its solar panels, Japan’s abandoned Hitomi space-based X-ray observatory was designed to hunt for black holes.

Japan’s flagship Hitomi X-ray Observatory was officially relegated to the cosmic dust bin last week, as that country’s space agency failed to regain communications with the craft that is thought to have broken up in orbit. In late March, scientists believed that the doomed X-ray astronomy satellite was still sending signals after it started orbiting out of control, however upon further analysis they discovered the transmissions were coming from a different source. Japanese engineers are now trying to determine why the craft started falling apart only a few weeks after launch. 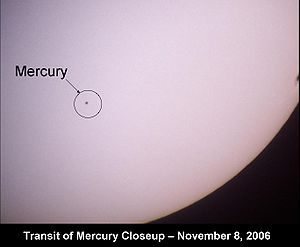 One of the rare celestial treats will occur next Monday, May 9, when the planet Mercury passes across the face of the Sun. Known as a planetary transit (or as the Burlington Free Press playfully calls it “A little black spot on the sun in May”), next week’s Mercury photo bomb of our home star marks only the fourth time in 17 years such a mini eclipse has happened (a rarer, more famo 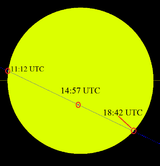 us Venus transit occurs in pairs with each event separated by eight years every 121.5 and 105.5 years respectively). Next week’s phenomenon will be visible in its entirety (use special eye protection – DO NOT LOOK DIRECTLY AT THE SUN!)  from western Europe and Africa to Eastern North American and most of South America. 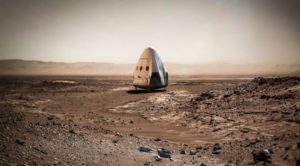 And it’s not an imagined dragon-like object misconstrued by UFO Sightings Daily, either!  SpaceX announced last week that they plan to land an unmanned Dragon capsule to the surface of Mars by 2018, as a “technology demonstration mission.”  The company said the now famous Dragon 2 craft will be dubbed “Red Dragon,” lifted by a Falcon Heavy launch vehicle – using some expertise from NASA, but none of the agency’s money. 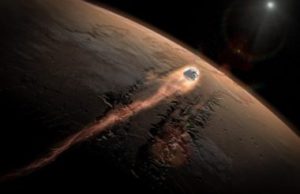 plan at the International Astronautical Congress in Guadalajara, Mexico, in September.  So far, he’s let it slip that his Mars scheme might include establishing a “city.”

“I think it’s going to sound pretty crazy,” he acknowledged.  “So, it should be at least entertaining.” 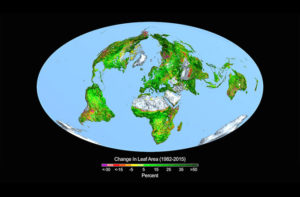 To isolate what causes planetary greening, scientists from around the globe have analyzed satellite data collected by NASA’s Moderate Resolution Imaging Spectrometer and NOAA’s Advanced Very High Resolution Radiometer instruments. With the use of this satellite data, the team concluded that about 70 percent of the increased vegetation growth could be caused by carbon dioxide concentrations.

Apparently it’s easier to be green, at least for the Earth, since increased levels of CO2 have been spewn into the atmosphere over the past few decades. According to a new study published last week in the journal Nature Change, carbon emissions between 1982 and 2009 have contributed to a global plant population explosion equivalent to twice the size of the continental U.S.  “While our study did not address the connection between greening and carbon storage in plants, other studies have reported an increasing carbon sink on land since the 1980s, which is entirely consistent with the idea of a greening Earth,” said study co-author Shilong Piao, of the College of Urban and Environmental Sciences at Peking University.

Before you think, “Gee, isn’t this a good thing?” researchers somberly add that the harmful consequences of excess CO2 such as global warming, melting glaciers, rising sea levels, and extreme weather still outpace any benefits from the oxygen provided by additional greenery. And it looks like the lusher vegetation may only be temporary. “Studies have shown that plants acclimatize, or adjust, to rising carbon dioxide concentration and the fertilization effect diminishes over time,” said Philippe Ciais, associate director of the Laboratory of Climate and Environmental Sciences in Gif-sur-Yvette, France. 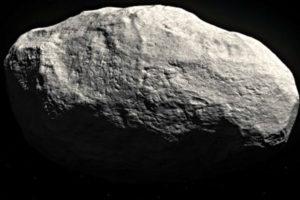 The world of astronomy is abuzz with the discovery of the first-of-its-kind “tail-less” comet that scientists believe was formed near Earth at the time of our solar system’s creation. The newly-found C2014 S3 celestial wanderer, nicknamed Manx after the tail-less cat breed, is believed to have been ricocheted to the uber-frigid Oort cloud where most comets are formed, and has now returned to its birthplace most likely for the first time since it was spawned 4 billion years ago.

Unlike most comets that are made primarily of ice, this particular celestial wanderer is more asteroid-like, and is comprised of rocky material found in the inner solar system. “If you’d shown me the spectrum, I would have just said this is another stupid asteroid,” said Dr Olivier Hainaut, ,co-author of a paper on the comet published last week in Science Advances. “If you showed me the orbit, I’d say yeah, it’s a standard long-period comet. But you don’t at all expect to find a rocky asteroid on an Oort cloud orbit. That’s wrong.”

Spectral readings show that the Manx’s materials haven’t been “baked” by the Sun, as is the case with other local orbiting asteroids, meaning that it most probably has been hanging out with trillions of icy “half siblings” in the deep frozen Oort cloud. “We already knew of many asteroids, but they have all been baked by billions of years near the Sun,” said the study’s lead author Karen Meech in a press release. “This one is the first uncooked asteroid we could observe: it has been preserved in the best freezer there is.” Since the Manx has undergone “very little processing,” researchers believe this is the first time it has been ejected from its frozen home since it arrived there.