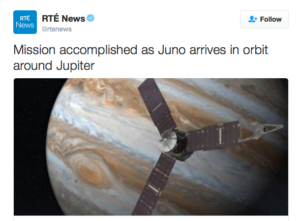 A gaggle of online news outlets have awkwardly earned the honorary “George W Bush We Don’t Have a Clue” award for their “Mission Accomplished” headlines following the successful arrival of NASA’s Juno spacecraft at Jupiter last week. Of course we don’t have to set the record straight, since obviously the probe is in fact just starting its ground-breaking exploration of the solar system’s olympic-sized planet.

After initial high-five celebrations on July 4 when Juno successfully entered Jupiter’s orbit, NASA engineers and scientists have been busy powering up the probe’s scientific instruments, as well as preparing for a trajectory correction this week to fine-tune the craft’s orbital path that will put it into a 14-day trajectory around the Jovian system. Currently, Juno is traveling in a 53.4-day orbital pattern where it will have its next closest approach to Jupiter on August 27 when NASA will be able to gather some preliminary data. “You can expect us to release some information about our [initial] findings around September 1,” said mission project manager Rick Nybakken. 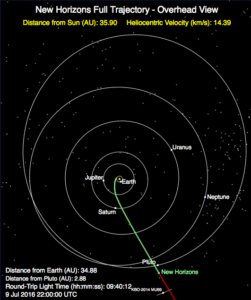 Just prior to Juno’s much-ballyhooed arrival at Jupiter, NASA announced late last month that it will extend the lives of nine other older robotic spacecraft that have continued to operate beyond their expiration dates. The most significant of these green-lit missions involves the space agency sending its New Horizons craft deeper into the Kuiper Belt where it will rendezvous with an ancient planetoid known as 2014 MU69 on New Year’s Day 2019. According to Universe Today, the  close encounter with 2014 MU69 will be the most distant up-close view of a celestial object in human history. 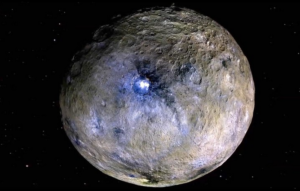 In other mission-extension news of note, after a mini-mutiny by a handful of researchers who campaigned to ship the Dawn spacecraft from Ceres to Adeona (another asteroid belt object),  NASA decided to keep the probe parked where it is, explaining that, “The long-term monitoring of Ceres, particularly as it gets closer to perihelion … has the potential to provide more significant science discoveries than a flyby of Adeona,” NASA also reasoned that he funding required for a multi-year mission to Adeona would be difficult considering the space agency’s constrained budget. 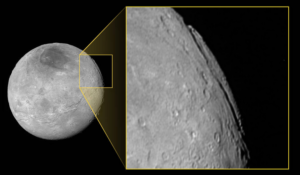 NASA recently released a photo of a “super grand canyon” on Pluto’s largest Moon, Charon that potentially is longer and deeper than any in our local star system. The photo above, taken a year ago on July 14, 2015, provides a side view of the informally-named Argo Chasma canyon that measures approximately 430 miles long and 5.5 miles deep (compared with Arizona’s Grand Canyon, which is 280 miles long and a little over a mile deep). The space agency notes that there are areas of Argo Chasma where the shear cliffs rival Verona Rupes on Uranus’ moon Miranda (which are at least 3 miles high) for the title of tallest known cliff face in the solar system. 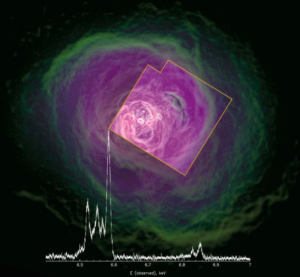 Japan’s doomed Hitomi satellite, which managed to remain in orbit for only a month earlier this year before it mysteriously spun out of control, apparently was able to conduct some black hole-hunting before it blacked out and merged with the infinite. In a new paper published in Nature, researchers have disclosed some findings based on last-minute data collected by the craft that could offer significant clues to the role of black holes in galaxy formation. According to Hitomi’s last-minute X-ray observations of the Perseus galaxy cluster located 240 million light years away, there appears to be less-than-expected radiation activity generated from the cluster’s supermassive black hole.“The surprise is that it turns out that the energy being pumped out of the black hole is being very efficiently absorbed,” co-author Brian McNamara of the University of Waterloo told Gizmodo.  “What it shows is that black holes very effectively control the growth rate of galaxies,” said McNamara, adding that these exotic super gravity wells play a big role in the eventual size of a galaxy. 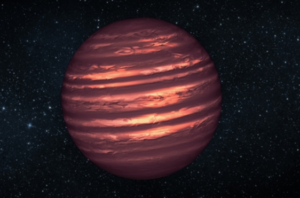 Astronomers are on cloud nine following the announcement that researchers have found the first strong evidence of water vapor on a celestial body outside our solar system.  According to Scientific American,  University of California, Santa Cruz scientists, have released their findings on recent observations of the “failed star” WISE 0855, which lives 7.2 light-years from Earth, and  most likely has water clouds or water ice in its atmosphere.