Cosmologists from around the globe pricked up their ears recently after astronomers from Cornell University detected repeating bursts of radio waves for the first time, coming from someplace far – very far – outside our galaxy. 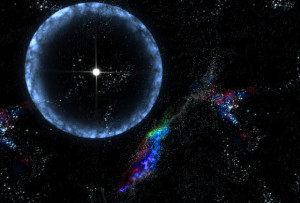 Artist concept of a magnetar, one of the possible sources of enigmatic radio bursts

As expected, the old-fashioned, true believing tin foil hatters are howling from the rooftops, convinced it is aliens making the belching blasts.

But even if it isn’t E.T. sending us their howdy do, it’s a fantastic discovery.  Never before have scientists found these flares hiccuping from the same source.  In fact, only about two dozen “Fast Radio Bursts” (FRB) have been detected since 2007, and astronomers believed, until now, that they had to be coming from a collapsing or emerging black hole, stars colliding, or a supernova – in short, from an event that kablooeyed itself into cosmic vapor. 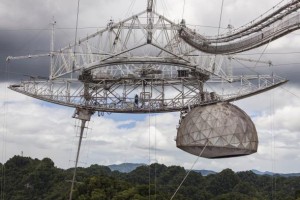 First detected in 2012 by Max Planck post-doc Laura Spitler, the “Spitler burst” was picked up by the Arecibo Radio Telescope in Puerto Rico.  According to Spitler, the mysterious radio emissions lasted only a thousandth of a second, and these particular discharging bursts remarkably emanated from the same entity 6 billion light years away. After scratching their heads in disbelief, the astronomer and her colleagues looked at the signals again, however they saw nothing in the data.  They finally tried wrangling a blast again one last time in mid-2015, believing they would get nothing since whatever caused the FRBs must have blown itself to smithereens. 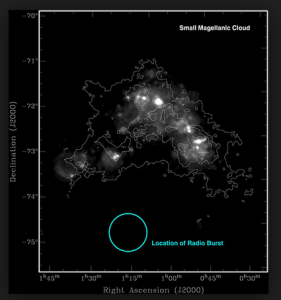 FRBs are coming from a point in the sky near the Small Magellan Cloud dwarf galaxy, itself a source of X-ray energy.

The data and print-outs from the 2015 viewing were not analyzed fully until months later, and the Cornell team got the surprise of their lives:  the same “object” produced 10 more of the FRBs.  Six of them were produced within 10 minutes, while the others were separated by weeks.

“Whatever produces the FRB can’t be destroyed by the burst, because otherwise, what would produce the next pulse?” said Shami Chatterjee, a senior researcher at Cornell, who has also described their findings as having “broken this enigmatic phenomenon wide open.” 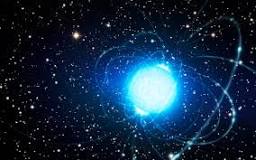 Right now, the Cornell astronomers’ best guess is that the repeating FRBs are coming from a magnetar, which is a neutron star with a super powerful magnetic field.  They emit high-energy electromagnetic radiation, particularly X-rays and gamma rays.

Ultimately, the Cornell gang put out the idea that there could be two different species of FRB’s: the kind that come alone when its source blows itself up, like colliding stars or other catastrophic events, and the kind that get repeated.  A magnetar?  Even the Cornell brainiacs (let alone the tin foil hatters)  can’t say for sure. 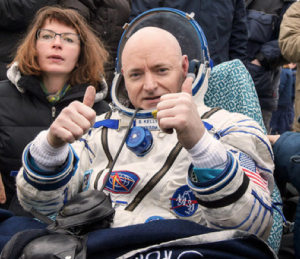 While NASA is keeping the lid on most details of orbital marathoner Scott Kelly’s condition following his return from space last week, one detail that received a special shout through the national media megaphone was that he grew 1.5 inches (albeit temporary) during his 340-day stay aboard the International Space Station. In addition to experiencing an almost immediate collapse of the natural spinal stretch achieved in zero gravity, Kelly reported after his return to Earth sore muscles, joint pain, over-sensitive skin and a sense he had been away for more than a year, according to Reuters. Kelly’s nearly year-long endurance spaceflight included more than 450 experiments, and is expected to further researchers knowledge on the effects of humans on eventual treks to Mars and other points beyond. 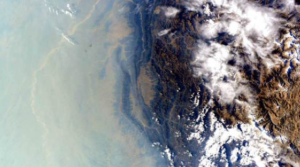 As was the case of most other space travelers, Kelly noted the fragility of our home planet’s ecosystem, especially in light of humankind’s desecrating presence: “You can see a lot of pollution over parts of Asia that is almost continuous. You can’t really see the ground very well. And those fires in California over the summer, that smoke was pretty extensive. But the predominant thing is you just notice how thin the atmosphere is, how fragile it looks. That combined with these large swabs of pollution is somewhat alarming,” Kelly said in a NASA Johnson news conference.. 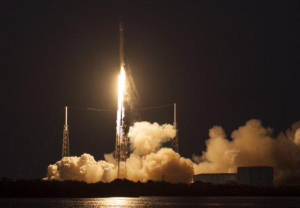 After several halted attempts, Space X finally succeeded in launching its Falcon-9 rocket on Friday, and while it scored a touchdown in delivering Luxomborg’s SES-9 communications bird into orbit, the commercial space firm failed to nail the extra point with achieving a pinpoint landing atop a special barge floating 375 miles off the coast of Florida. “Rocket landed hard on the droneship. Didn’t expect this one to work (v hot reentry), but next flight has a good chance,” Space X chief Elon Musk tweeted optimistically, according to a UPI report.  The Hawthorne California-based firm cautioned before the flight that there were low expectations of safely landing the Falcon’s first stage because of the additional fuel needed to loft the SES satellite. 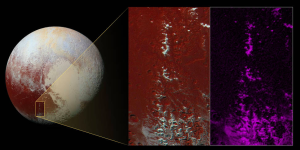 Lovecraft) showing the possibility that methane from the dwarf Planet’s atmosphere condenses as ice on top of its high mountain ranges. “That this material coats only the upper slopes of the peaks suggests methane ice may act like water in Earth’s atmosphere, condensing as frost at high altitude,” said John Stansberry, a New Horizons science team member from Space Telescope Science Institute, Baltimore, Maryland. Composite data collected by the New Horizon’s spacecraft suggests that the bright ice on the mountain summits (red left-hand inset above) almost exactly correlates with the distribution of methane ice (shown as purple above)

Populations in parts of Indonesia including Sumatra, Borneo, and Sulawesi, will have front-row seats for this week’s Total Solar Eclipse, which is stated to begin 23:19 UTC tomorrow, March 8,  and reach totality at 01:59 UTC on March 9.  Totality will last for 4 minutes and 9 seconds. The spectacular celestial alignment will conduct an encore performance on August 21, 2017, and will cut a diagonal swath through the US from Oregon to South Carolina. 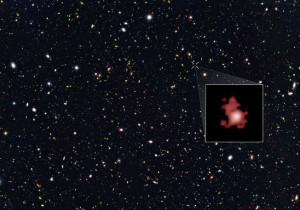 The Hubble Space Telescope has set a cosmic record into the distant past, snapping pix of a galaxy as it was first forming in our Universe a mere 400 million years after the Big Bang some 13.8 billion years ago.

The galaxy, dubbed GN-z11 (and don’t ask us how it got this goofy moniker) is 25 times smaller than the Milky Way but the stars in it are forming 20 times faster than more common era galaxies. 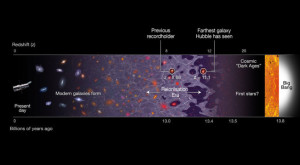 Timeline of the Universe.

Scientists determined how far away and how old the galaxy was by using red shift wavelength in our expanding Universe.  Knowing how extremely far back in time and space GN-z11 is, astronomers have high hopes that the even more advanced James Webb Telescope, which is due to launch a million miles into space in October 2018, will catch the actual birth of the Cosmos. 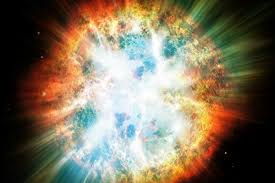 That said, scientists are not even close to knowing how many billions of times the Big Bang might have happened, or how many katrillion other universes there are besides our own. 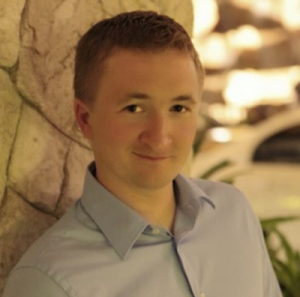 No, he wasn’t bitten by a radioactive spider or rocketed to Earth as an infant from Krypton, but UC Berkeley astronomer and exoplanet egghead Howard Isaacson added crime fighting to his resume when he recently assisted police in the arrest two burglars on the university’s campus. Isaacson, who studies alien planetary systems for NASA’s Kepler Space Mission, used his trained eagle eyes in spotting suspicious activity late one night from his lonely post that led to the arrest of two intruders accused of stealing items from the building that houses Berkeley’s astronomy department, thus ending a crime spree that allegedly involved other break-ins at UC Irvine in southern California.