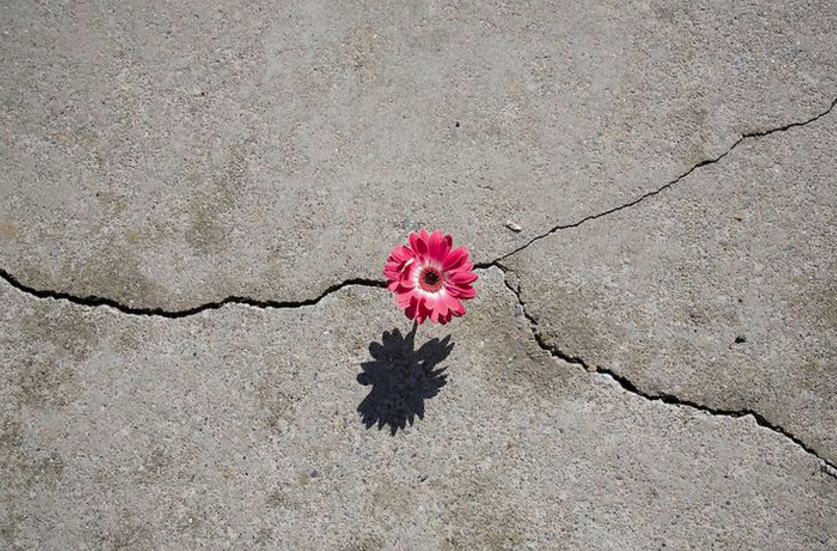 Life always finds a way.  You know that feeling you get when you are walking along a cement sidewalk and suddenly you see an improbable lone weed or flower sprouting through a tiny crack in the unforgiving concrete, and you say to yourself, “Against all odds, life perseveres.”  Well, we collectively had one of those moments last Thursday when NASA made a big deal announcement that Saturn’s moon Enceladus harbors the recipe for microbial life.

This “watershed” data was gleaned from the wondrous Cassini spacecraft, doomed to die this September when its handlers steer it to a swan dive into the clouds above Saturn, Enceladus’ mother gaseous planet.  Scientists say that’s better than crashing it into the exotic satellite or any other of Saturn’s watery moons since it is quite possible now that one or some of them may contain some form of life; it’s the NASA version of Star Trek’s “prime directive” tenet of non-interference with the evolution of other life forms of other worlds. 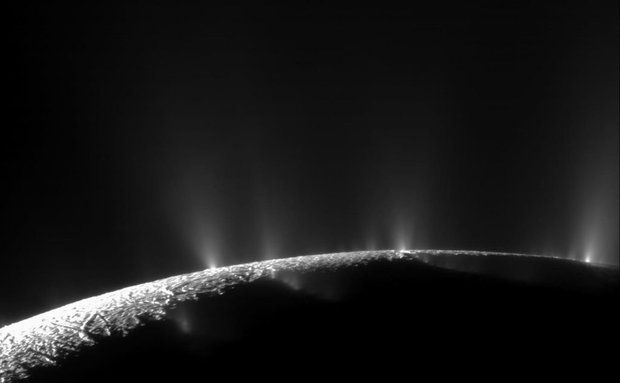 According to NASA, Cassini discovered geysers spouting ice and gas on the tiny moon’s south pole in 2005, and when scientists went in for a closer look in 2015 they made the probe fly through one of these geysers.  It turns out a key component of the jets is molecular hydrogen – a sure sign of hydrothermal activity.  Saturn may be far from our Sun, and Enceladus is a frozen salt water world with an ice shell 19 to 25 miles thick, but the core of the moon is heated by the gravitational pull of the great ringed planet. 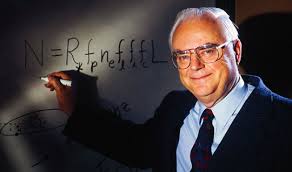 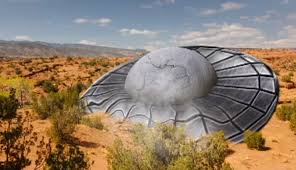 I will never forget a conversation I had 20 years ago with Dr. Frank Drake, father of the Drake Equation (that measures how many intelligent civilizations there are in our galaxy alone) and founder of the SETI Institute in Mountain View CA, (the Search for Extraterrestrial Intelligence using radio waves).  If it sounds like I am name-dropping, it’s because I am.  We were both bemoaning the government’s latest “explanation” on the Roswell Alien Craft Flap of 1947 – now the “aliens” everyone saw were supposed to be crash test dummies dropped from the exosphere from Mogul weather balloons — except that the brass did not start using the dummies until 1952 so they were five years off, and gee, would anyone notice the discrepancy?  Over lunch, we both had steam coming out of our ears:  Drake, because he was disgusted by the government’s imbecilic explanations of what he did not believe was an alien craft crash, and I, because I wanted to believe the aliens had really crashed and the government was giving yet another lame, insulting account of what really did not happen.  (Click here for The History Channel’s version of Roswell and here for The Roswell Museum’s version) 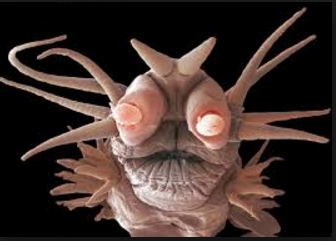 This deep ocean worm (Nereis sandersi) lives off the minerals from hydrothermal vents.

However, the upshot was we both knew unequivocally that life is more probable on planets where there is water, rather than just possible.  We talked about the then newly discovered super hot ocean thermal vents that give birth to microbial life, which feed more critters on up the food chain ladder; how microbes have been found to thrive in the deep freeze permafrost (which is now melting) of both poles; and in the intricate depths of caves that have not seen sunlight for millions of years. 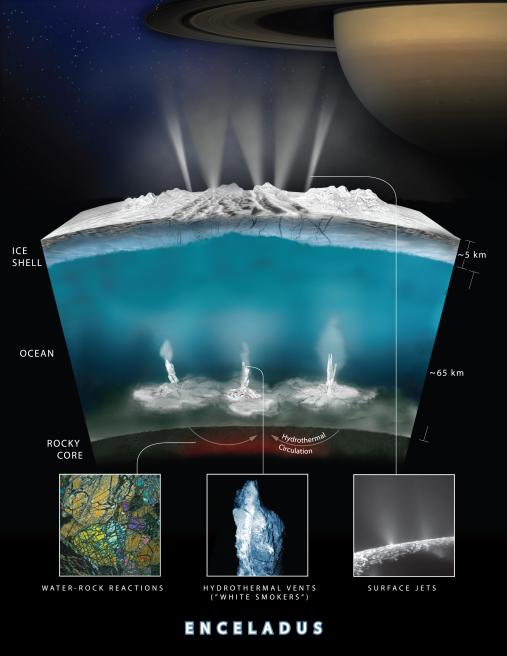 In the case of Enceladus, the hot water from its ocean floors has a further jump on all the ingredients needed to form basic life, through something called serpenitinization. The iron-rich rock of those sea floors reacts with the moon’s hot water to form that molecular hydrogen, the element that indicates life can find a way.  After the Hubble Telescope took pix of Jupiter’s moon Europa, scientists are hoping the same hypothesis for life may be true for that moon – which is much older than Enceladus and therefore could have more advanced, evolved life in its ice-covered oceans – and for so many of the other moons orbiting the two big “gas” planets. 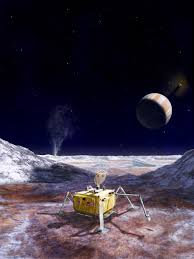 But don’t look to the Trump Cabal to understand the importance of this…for that matter, the importance of anything that doesn’t have to do directly with the Liar-In-Chief or that isn’t gilded.  NASA has slated the Europa Clipper mission for the late 2020s to explore more about the geysers on Europa, and in 2016 Congress approved a landing component to the mission to examine the oceans beneath Europa’s icy surface.  But, predictably,  the Trump team wants to cut the lander (along with many Earth monitoring sats and missions) from NASA’s budget.  The Verge and Eric Berger of Ars Technica publications give us hope:

While Trump’s budget request doesn’t provide any funding for the lander, chances are the project isn’t dead yet. The Europa lander has been a personal pet project of John Culberson (R-TX), who is in a prime position to bring the mission back. He’s the chairman of the US House Appropriations Subcommittee that’s responsible for coming up with the budget for NASA. And since Congress has the final say in how NASA gets funded, it seems pretty likely that Culberson will bring the lander back from the dead.

There’s nothing like vanity when it comes to assuaging Republican ego, so get your emails ready to solicit Culberson to do his job.

This next Saturday is the Big One, folks.  Put on yer pink knitted brain caps and March for Science!  – Kate Woods, Writer-At-Large 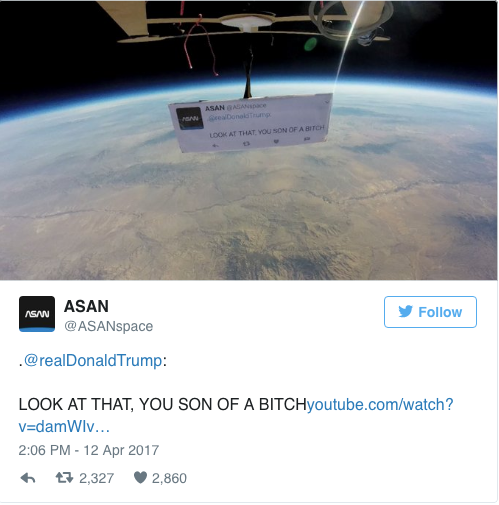 Taking former First Lady Michelle Obama’s admonition to “go high” when others “go low” hasn’t stopped the Autonomous Space Agency Network (ASAN) from also hitting below the belt when it comes to Donald Trump. In staging the first-ever cosmic political protest, the Phoenix-based independent group of grass roots space exploration programs launched a printed tweet via a high-altitude weather balloon containing the partial quote of the late Moon-walker Edgar Mitchell, who wanted to take politicians by the scuff of their neck and drag them out in space to view the beauty of our planet, and say, “Look at that, you son of a bitch.” Unfortunately, we don’t expect the Baby Bomber-in-Chief to quit playing cowboys and indians long enough to take in such a highbrow message. 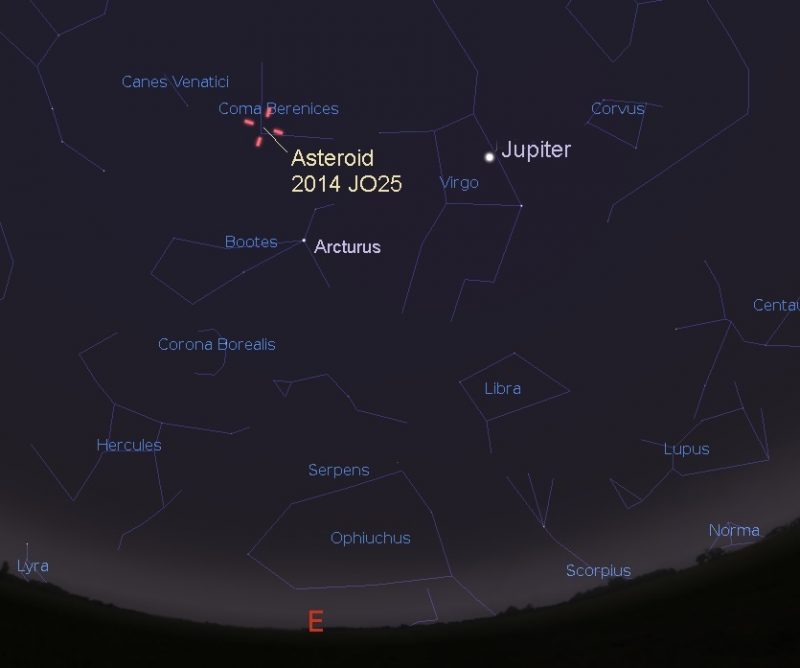 Here we go again.  On April 19th the asteroid 2014 JO25 – 60 times bigger than the one that exploded in the sky over Chelyabinsk, Russia in February, 2013 – will come its closest to Earth in 400 years and might be visible in the night sky. Still, the 2,000-foot wide asteroid will be 1.1 million miles away.  But scientists make the point that cutting key projects like the Asteroid Redirect Mission from NASA’s budget do nothing to help our understanding in how to avoid the planet killers in the future.  2014 JO25 was first discovered by the Catalina Sky Survey near Tucson, Arizona in May 2014 and is listed as a Potentially Hazardous Asteroid by the Minor Planet Center.  It may be visible in the night sky with amateur telescopes for 18 minutes starting at 3:40 AM Central Time. For more details on how to spot it, read EarthSky. Also click here to view a video of the cosmic wanderer. 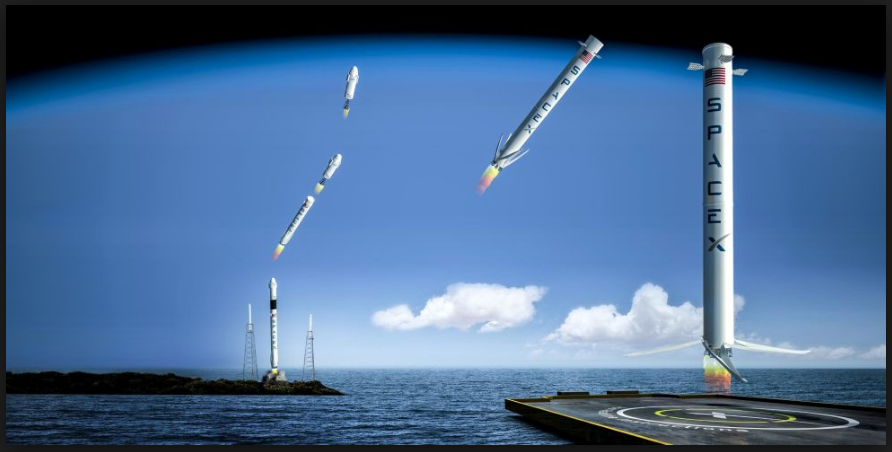 Flush from the success of SpaceX’s first-ever launch of a recycled Falcon-9 booster, company head Elon Musk tweeted recently that his firm’s next goal is to promise a 24-turnaround using the same reclaimed rocket, ultimately lowering the cost of in-orbit deliveries by 30 percent. Echoing Musk’s new line in the sand, SpaceX President Gwynne Shotwell noted before last month’s historic reclaimed rocket mission that “We’re really looking for true operational reusability, like an aircraft, An aircraft lands, goes to the gate, passengers come off, passengers go on, you refuel, and then you fly again. What we’re looking to do is exactly that. We land and relaunch on the same day.” Eventually, the commercial venture wants to make space travel to Mars as ho-hum as a trip to Dubuque, Iowa, with an “Interplanetary Transit System” bustling with streamlined spaceliners ferrying wide-eyed “colonists” from the Earth to the Red Planet.

NASA just funded 15 wild ideas, some which seem ripped from some of our favorite science fiction stories. From artificial gravity devices, to the concept of terra-forming Mars with benevolent bioengineered microbes, NASA’s Innovative Advanced Concepts or NIAC program doled out $125,000 in grants to each of the 15 winners, and will help another seven inventors in Phase 2 of the program with an additional $500,000 each to develop their concepts.  Some of the other concepts funded by NIAC include, as “Midnight in the 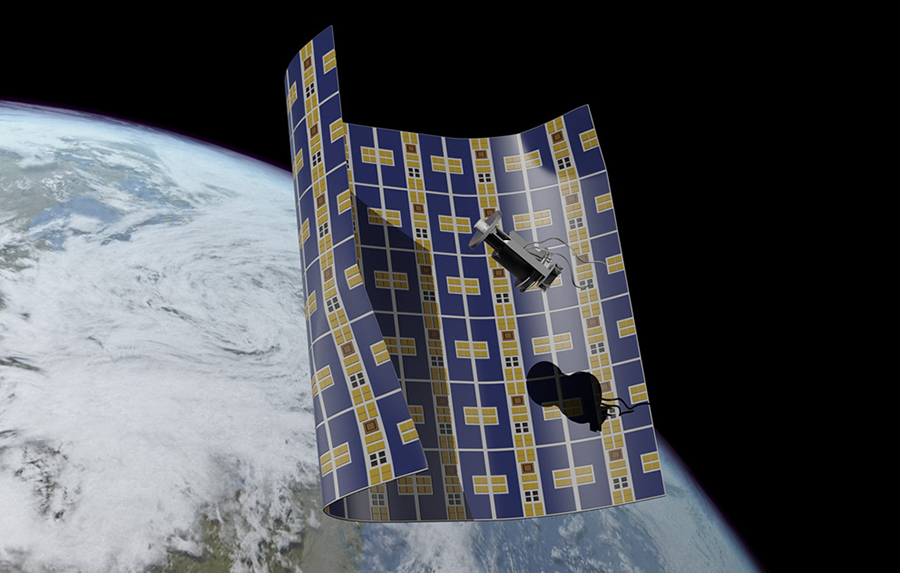 Desert” put it, “a swarm of robotic spacecraft to pick apart asteroids, a method for growing food in Martian soil, two fusion projects, a JPL study on interstellar propulsion techniques, [and] a system to physically tether spacecraft to Mars’ moon Phobos.”  That last one we’d like to see, considering the many “inexplicable” problems that Martian moon has caused humans. 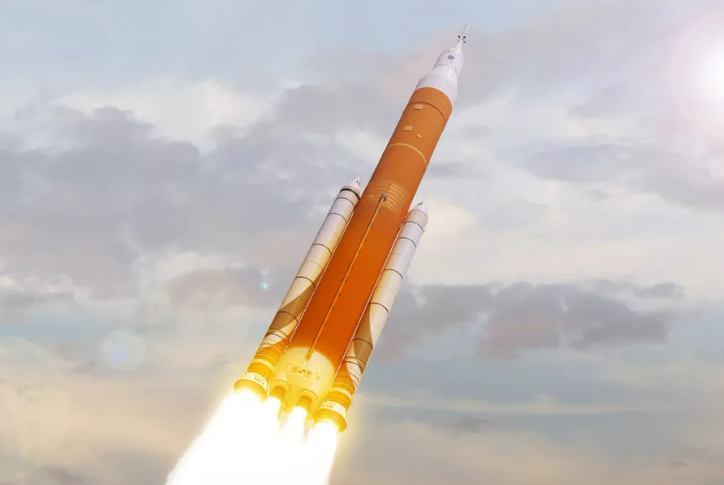 A new report from NASA”s Office of Inspector General has dampened the hopes that the space agency will get its next-generation Space Launch System (SLS) off the ground by late next year because of insufficient funds to cover unexpected technical glitches and general high costs. Currently, NASA has penned in an uncrewed flight around the Moon in late 2018 and a human mission to our nearest celestial neighbor no later that 2021;  however, there are still various moving targets that could cause setbacks including software development delays and the possibility that the space agency, under pressure from the Trump administration will change its first trip to the Moon to include humans aboard the Orion space capsule.

NASA Earth Scientist Miguel Román and his team have devised a way to create composite night photos of the Earth from space sats while eradicating light from the Moon phases, snow, ice cover, clouds and atmospheric emissions. The results are stunning, and can give one pause on how humans are shaping – and altering – this planet. 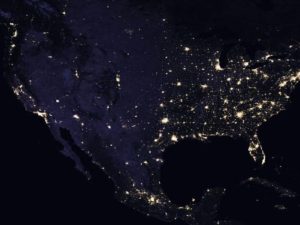 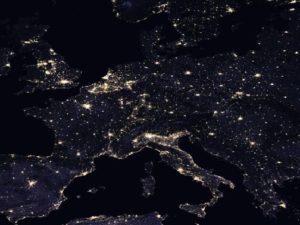 Free to a Good Home

Just in time for this year’s Earth Day this Saturday, NASA has placed our home planet up for adoption.  And it’s not just the agency’s way of participating in the annual environmental and climate literacy celebration – NASA is saying Earth needs some responsible parents, because the current “leaders” are complete assholes when it comes to protecting it.  The agency has sectioned the planet into 64,000 segments and set up a “virtual adoption agency”

wherein participants are assigned a a 55-mile wide section of the Earth to monitor.  There is nothing legal about it, no deeds or rules, but rather, it is to make people realize how precious this pale blue dot is.  And boy, we need some stewardship now more than ever.  Scientists this week are claiming that the Great barrier Reef is now terminal, and some journalists are writing its obituary:  “The Great Barrier Reef: Dead at

25 Million Years Old.”  Another disheartening story:  A land mass the size of India in northern Norway, peat mounds that were permafrosted since humans started walking this orb, has officially thawed.

Galactic Sandbox is the proud “steward of a section of the Southern China Sea southeast of Australia, and you can check it out here.