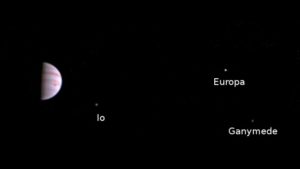 Juno’s first in-orbit portrait of Jupiter and three of its largest moons was taken days after the craft reached the Jovian system on July 4th. The orbiter’s  “Juno-Cam” is expected to start taking high-resolution pix of the giant planet starting August 27th. 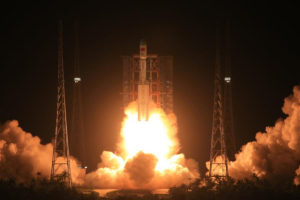 Chinese and Russian officials are discussing the possibility of combining their nations’ space exploration resources, with possible joint missions to the Moon and Mars, reports Forbes. “We’re developing an understanding for the rocket and space industry for possible interaction in such profound and technologically complex projects as the future exploration of the Moon, Mars and piloted cosmonautics,” Russian Deputy Prime Minister Dmitry Rogozin said in a statement last Wednesday. Rogozin’s comments come on the heels of Russian President Vladimir Putin’s visit to Beijing last month when the two nations set the legal framework on sensitive space technologies in cooperative launch vehicle and rocket engine programs. 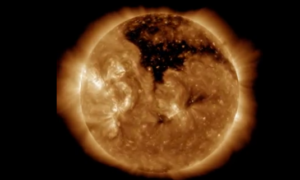 A picture of the recently-developed coronal hole on our Sun was taken by the Solar Dynamics Observatory that was launched in 2010. The black area represents energy emissions of ultraviolet and x-ray waves.

NASA scientists have observed an ominous coronal hole on the surface of the Sun that while being no big deal to the natural life cycle of our star, it could signal a raised threat of satellite communication disruption here on Earth. According to Universe Today, most solar black spots appear at the poles, but when they develop in the equatorial regions – as did the famous “Big Bird”  hole in 2012 – they could run havoc on Earth-bound telecommunications and power grids. In fact, the Big Bird spot was a precursor to the most most powerful solar storm in 150 years, “If it had hit, we would still be picking up the pieces,” said Daniel Baker of the University of Colorado’s Laboratory of Atmospheric and space Physics. 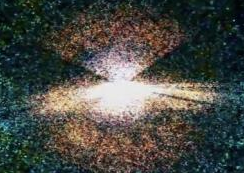 The pinpoints of light shown in the new 3-D scan of the known universe each represent a galaxy — approximately 1.2 million of them.

The newest 3-D marvel hasn’t been produced by some Hollywood dream factory, but by the inventive minds at the Baryon Oscillation Spectroscopic Survey (BOSS) who have fashioned a complex 3 dimensional map of our universe that covers 650 billion cubic light years of space and includes almost 1.2 million galaxies. According to GIzmodo, the astronomical scan provides one of the most precise measurements to date of the universe’s expansion, and upholds the leading theory that dark energy plays a major role in this augmentation. 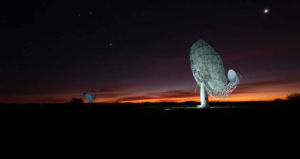 The SKA super telescope array will be capable of exploring deeper into space in unparallelled detail. 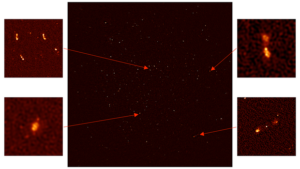 South African astronomers took its super-sized “MeerKat” radio telescope for a spin recently, and even at one quarter capacity, the powerful array spotted 1,300 new galaxies in a corner of the universe where only 70 were previously known. According to a chief scientist of the multi-nation square kilometre array (SKA), the first light images taken by MeerKat were “far better than we could have expected, … and is “already the best radio telescope in the southern hemisphere.” When fully online in the 2020s, the SKA will boast a army on 3,000 dishes across several countries, and will  deliver observing power 10,000 times greater than most modern instruments, reports The Guardian.