Anyone reading this publication knows that the human race – in order to survive this Universe – must abandon Earth and find a new home somewhere “out there” within a billion years as the Sun’s luminosity dims and can no longer support life as we know it (not to mention the weenie roast that happens another 4 billion years later when our local hydrogen bonfire gets serious about toasting the inner half of this solar system, and then dies). 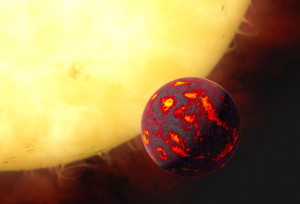 Yet, we are so reluctant to take into account our own torrid poisonings upon this Earth:  I refer to the fact that our days of living on this planet are cut quite short from the “next billion year” mark.  This is a fact confirmed by 97 percent of the world’s scientists (the other 3 percent, more concerned about their boat payments, have been bought out by massive corporate polluters like the Koch brothers). 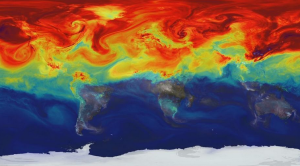 NOAA reported last week that the growth rate of carbon dioxide in the atmosphere in 2015 was the greatest in a single year ever..

Dishearteningly, recently published research shows that we are killing ourselves much faster than we previously thought.  With that in mind, I applaud President Obama for leading the way in the Paris “Climate Crisis” Accords that took place last November.  For the first time in Earth’s history, the world’s leading nations agreed to take meaningful action towards curbing the green house gasses we are spewing into the atmosphere.  In short, we are attempting to buy more time to get the hell off this planet.  And this international agreement, made in the aftermath of obscene and moronic terrorist attacks, was unanimous.

For once, it was looking like our world leaders reflected the will of the people they represent.

However, not to be whupped by representative democracy, the multinational corporate 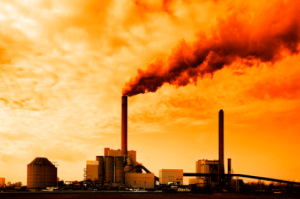 hydra shook its collective smoke-ringed heads and sputtered, “not so fast.” As if on cue,  the US Supreme Court in response to the imploring of 27 states and dozens of corporations and industry groups seeking to block the E.P.A,  issued an unprecedented stay of the Obama administration’s Clean Power Plan, thus melting the hopes of a climate change U-turn faster than a polar bear-ensconced glacier shard.

Technically, the Supreme Court placed a temporary stop to the EPA enforcing the new rules until the justices themselves decide their legality. Sadly, with pro-corporate, anti-planet stalwarts like Justice Antonin Scalia on the bench, the future was looking pretty bleak. 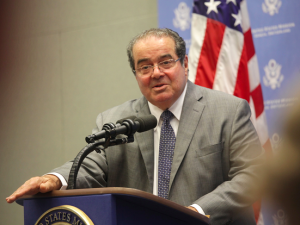 And then, who woulda thunk??  To paraphrase Antonio Salierii, “A miracle happened” – Scalia up and dies.  Sorry folks, but I gotta say, not a day too soon.  Just before he passed, we climate-is-screwed knowers also knew that Scalia’s vote in this matter could undo the international agreement…  and if the U.S. reneges on it, what do you think China and India and the USSR and the entire world will do?

Scalia was always a well-known anti-environmentalist, in all his votes and nonsensical opinions.  When it came to stopping massive polluters, Scalia’s mantra was “do nothing.”

Gizmodo reports:  In 2007, [Scalia] wrote an alarming dissent to a landmark Supreme Court ruling that the EPA can regulate carbon dioxide as a pollutant, on the grounds that “it is not the Atmospheric Protection Agency.” In 2006, when the attorney general of Massachusetts gently reminded him which atmospheric layer was suffering the most from carbon emissions, Scalia replied:

“Troposphere, whatever. I told you before I’m not a scientist. That’s why I don’t want to have to deal with global warming, to tell you the truth.”

When I take into account what I have researched and investigated, what I know right now 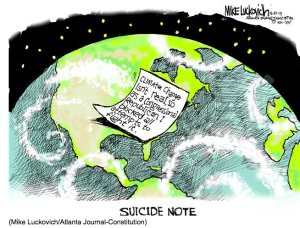 when it comes to the Republicans who are trying to halt any effort to save the human race from itself, their overt efforts are bereft of any reality.  Everything is for show.  The Republican Party’s presidential candidates deny global warming and mock scientists for studying Earth’s accelerating warmth, much like Senator Ted Cruz (R-Canada) and Congressman Lamar Smith (R-Seceded Texas) does in his steering of the House Space, Science and Tech Committee which ultimately funds (or defunds) NASA. And then these Republican proxies for Polluters-R-Us go running home to mommy, er I mean the Supreme Court, when their fairy tale (and ultimately mercenary) views don’t prevail. 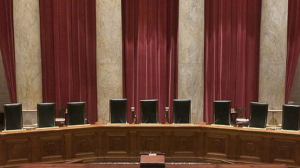 The eventual point I wanted to make is that we now have a chance to perhaps pull the Earth back from the brink of a disastrous human-caused early demise, now that there is a seat vacant on the Supreme Court. And any unconstitutional chant by a walking dead Republican for Obama to “do nothing” and let the next President pick a Justice nominee should be seen for what it is — a last ditch attempt to put a bullet to the head of Mother Earth and its inhabitants.

Keep tuning in here, folks.  We will give you a heads up when the Republicans greed goes so over the top that we all have to scram away from any nuclear or environmental bomb they toss when they don’t get their money-lusted way.

As of publication Sunday, planetary scientists hoping to find past or present evidence of life 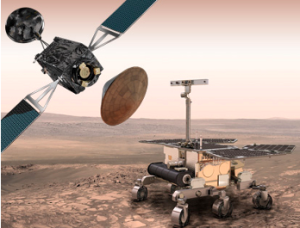 on the Red Planet were crossing their fingers, as the first phase of the European Space Agency’s long-awaited  ExoMars mission was poised for launch today aboard a Russian Proton rocket.  In preparation of a rover mission that will depart Earth in 2018, today’s liftoff from the Baikonur cosmodrome in Kazakhstan will carry ESA’s Trace Gas Orbiter (TGO), designed to search for atmospheric trace gasses such as methane, and an Entry, Descent and Landing Demonstrator Module (EDM – also known as Schiaparell) that will evaluate the future lander’s performance as it plunges to the planet’s surface, as well as monitor the  environment at the rover’s planned landing site. The duo spacecraft are expected to arrive at Mars this October. 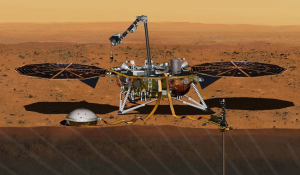 NASA’s Interior Exploration using Seismic Investigations, Geodesy and Heat Transport (InSight) mission, which was originally slated to be launched this month but was sidelined with a pesky vacuum leak to its prime instrument last December, has been assigned a new launch window that starts May 5, 2018 (that’s right, this is not a typo), with a Mars landing set for November 26 later that year. Once the InSight craft reaches its destination, it will burrow deep in the Red Planet’s interior to help scientists better understand how rocky members of our Solar System, including Earth, formed and evolved.

The seismometer device that failed last year will be retooled by NASA JPL and reintegrated and tested by France’s CNES space agency, with a finished, thoroughly tested component ready by 2017. According to NASA, the main sensors need to work within a vacuum chamber to provide ground movement measurements at incredibly accurate levels of half the radius of a hydrogen atom, while being tough enough to maintain a high degree of rarefaction around the sensors through the rough and tumble pressures of launch, landing, deployment, and a planned two-year stint on Mars’ surface.

Just think of the change you can save with recycled rockets, Space X’s President Gwynne 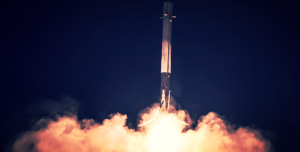 Shotwell (no pun intended) implored a group of satellite industry professionals as she pitched her company’s aggressive plans to offer discounted payload rides atop spacecraft powered by recovered first stage boosters. “We need to recover more and see how many times we can reuse the stage … but I’d like to see a 30 percent reduction from reuse,” she told attendees at the Satellite 2016 love fest in Maryland last week. “The second stage we are not currently recovering, maybe we could figure out some great way to get that back as well,” she added. With plans to loft 18 rockets this year – including one with a reclaimed first stage – keeping costs down will be crucial to Space X as it navigates the cutthroat commercial satellite delivery industry.

According to Via Satellite, Shotwell dispelled any notion that every Falcon-9 first stage will be salvaged, noting that the company hopes to collect 75 to 80 percent of the primary boosters from low Earth orbit missions and 50 to 60 percent used in Geostationary Orbit deliveries. On a related subject, Shatwel also disclosed that to accommodate its ambitious 30 to 50 percent increase in the number of missions year after year, Space X will be employing an additional launchpad at Cape Canaveral, and has plans to build a new launch center in Houston TX.

Of the many stories surrounding last week’s Total Solar Eclipse, one l 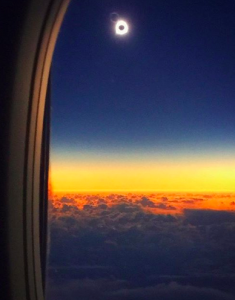 iterally high drama 30,000 feet about the Pacific occurred as a dozen astronomers and eclipse chasers convinced Alaska Airlines to make an adjustment to its flight 870 from Anchorage to Honolulu to zip straight through the eclipse’s totality. According to USA Today, Chase Craig, Alaska Airline’s director of onboard brand experience, said via Alaska Airlines’ blog: “We recognize our customers’ passions. Certainly we can’t change flight plans for every interest, but this was a special moment, so we thought it was worth it. Now we have a plane full of customers who will be treated to a special occurrence. 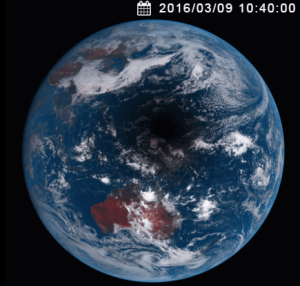 Related Solar Eclipse hoopla:  From a slightly higher altitude, Japan’s Sunflower-8 meteorological satellite captured the Moon’s shadow from Earth as it raced across the Pacific on March 9th. To view the complete video, click here.