“Experts” are weighing in on the newly discovered salt water on Mars, and the opinions vary astronomically (to be droll) – from touting inevitable microscopic life to claims of cover-ups (yes, the conspiracy truthers are dusting off their tin foil hats). Regardless of what may be found at the end of the Martian rainbow, NASA officials are more determined than ever to send a crew of humans to the Red Planet by the next decade. 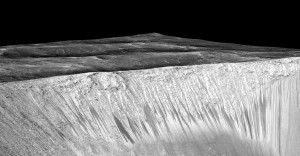 Hope springs eternal: NASA finds evidence of water flowing on Mars. Size of the water streaks (above)  fluctuates throughout the Martian year.

In the meantime, scientists are spitballing whether the perchlorates (hydrated salts) originate from the near non-existent humidity in the Martian atmosphere or from underground aquifers.  NASA has long known that water was trapped in the perma-ice at the poles, but has never confirmed, until last week, that the salty frost appears in dark lines seasonally. Dr. Bob Zubrin, a long-time advocate of human exploration on Mars, is convinced the brine water bubbles up from aquifers. This, he believes, is quite possible since salt water has a much lower freezing point than fresh H2O, in addition to the fact that while Mars averages a frigid -70°F, the equator can warm up to +70°F during the Martian summer.  Pre-eminent Astrobiologist Chris McKay of NASA Ames in Mountain View, CA adds that the water, to be liquid, is so salty nothing could live in it.  “The short answer for habitability is it means nothing,” he told the New York Times.

But wait!  There’s more.  Natural News (whatever you do, do not confuse it with the highly-regarded science publication Nature) says NASA has always known about the running water on Mars and has been trying to cover up the existence of microscopic life on the Red Planet since 1976 when the Viking Lander “discovered it.” 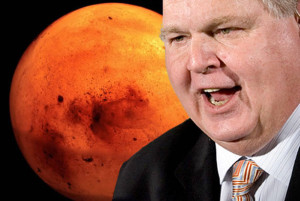 In space no one can hear you scream .. Rush Limbaugh proposes far-out Mars theories. Photo: Salon.

But the Tin Foil Hatter of the Week goes to:  Ta Da!  That bloated windbag, cigar-chomping, radio crackpot provocateur (drum roll …trumpet blat … rim shot!) Rush Limbaugh, who claims the Mars water discovery is an Obama plot to “advance the liberal agenda,” since he knows they are going to entwine it with global warming on Earth.  Furthermore, and mark his words, NASA is now devoted to “Muslim outreach” and also doing unwarranted publicity for Matt Damon’s new movie, “The Martian,” which proves the Administration’s ongoing nefarious conspiracy with the liberal elite Hollywood cabal.

Talk about all wet. Oh, the humanity. 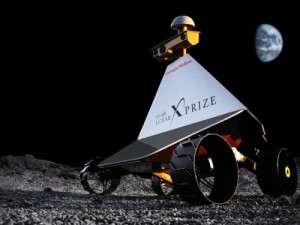 Eyes on the XPrize: 21st Century tycoons look to the Moon as a springboard for space age industrialization.

R o c k e t f e l l e r s
The space enterprise battle of the billionaires heats up with a new development in the race for Google’s Lunar XPRIZE, a $30 million pot for the company to first set up shop on the Moon, with another $30 million more in awards between NASA and Google to get there.

Moon Express, founded by Silicon Valley entrepreneurs and venture capitalists, just jockeyed into the lead when the start-up recently signed a launch deal with Los Angeles-based Rocket Lab to deliver three robotic lunar crafts to our pockmarked satellite, starting as early as 2017. (The XPRIZE competition requires entrants’ commercial craft to land, travel 500 meters across the lunar surface and send high-definition images and video back to Earth.)

Ultimately, the company plans to blaze a trail toward mining rare minerals from the Moon, including gold, cobalt, iron, palladium, platinum, tungsten and Helium-3, a gas that can be used in future fusion reactors to provide nuclear power without radioactive waste.  The Moon’s regolith (a fancy way of saying “dirt”) is chock full of Helium-3. 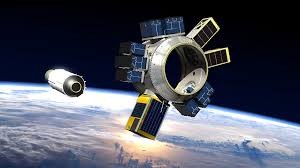 Don’t worry about Musk – he’s laughing all the way to the bank after penning a huge deal last week in the booming satellite launch market.  Seattle-based Spaceflight is the customer, and will be doling out $65 million for a launch in 2017.

Musk’s Falcon 9 rocket will be launching Spaceflight’s 20 satellites from both the U.S. and foreign nations, a mix of commercial and governmental hardware, from Vandenberg Air Force Base in California.

But speaking of mining the Moon, I came across a buried news blurb this week about a bill in the Senate that could pass any day now.  It would allow private companies to actually own the space targets they want to mine, specifically the Moon and asteroids.

First, I realize it seems like the lousy punchline of a bad joke to say that Congress might pass anything soon.  And we all know that when they do pass some nitwit law, it never bodes well.  Such is the case for this new bright and greedy idea that blatantly violates U.N. space treaty laws. (It’s also disconcerting to see potentially like-minded notions popping up, for example, on Moon Express’ website that cheerfully describes our nearest celestial neighbor as the “Eighth Continent.” Sadly, it’s one small step for profit, one giant leap to profiteering.)

Those international laws, signed by the U.S., Russia and many other nations specifically state that no country can own a part of outer space, including planets or asteroids.  They belong to everyone.

Absconding with minerals from someone else’s mining claim (in this case, the properties in question belong to the entire human race, and that doesn’t even include the alien shareholders of other planets in the multiverse) is what we miners call “high-grading.”  And a highgrader is the lowest form of life to the seasoned tunnel king who respects another man’s mining claim. 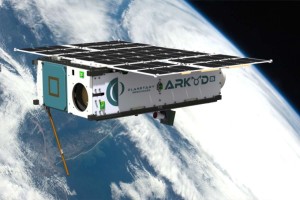 When the Outer Space Treaty was made in the 1960s, the diplomats for some reason could not foresee a “company” trying to own mining rights – or a property deed – to any entities floating out there.  A company called Planetary Resources is already trying to stake property rights on asteroid and Moon plots they plan to strip for minerals.  The bill would also allow space-mining companies to sue other parties if the assumed competitors attempt to “cause harmful interference to space mining ventures.”  Here we go.

The bill has already passed the House and is expected to pass the Republican-heavy Senate this month.  The only hope for a free Universe is a veto from President Obama. 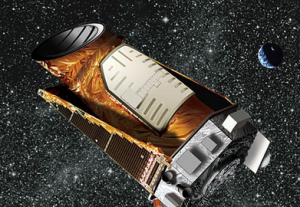 Past economy-class NASA missions include the Kepler telescope launched in 2009 to seek Earth-like planets orbiting other star systems.

The agency has culled five out of 27 proposals in their 13th small-class Discovery planetary science competition.  Of the five selected, two will study Venus’ atmosphere and topography and three will inspect nearby asteroids.  Each of the proposal teams will receive $3 million in seed money to develop their plans over a year, until NASA whittles it down to “one or two” in 2016, says the agency.  A total of $500 million will be allotted to the winner, or winners, (excluding launch and post-launch costs) which for now consists of teams from NASA Goddard in Greenbelt, Maryland, and the Jet Propulsion Lab in Pasadena, CA.

Among the proposals not selected was an excellent bid to study the “jinxed moons” of Mars, the potato-shaped Phobos and Deimos asteroids.  Tin-foilers have been blaming the pair for failed missions — especially the many doomed Mars shots from Russia.  Another mission entrant wanted to venture into the Kuiper Belt, to the icy dirt chunks and asteroids beyond Pluto.

D a w n ’ s  T h i r d  L i g h t
NASA continues to generate regular updates about the many mysteries of Ceres, which is currently being eyeballed by the Dawn spacecraft as part of the Rosetta Mission. 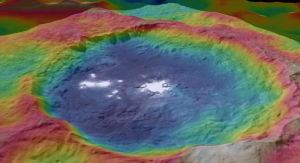 Now the flustered space agency is describing those bright lights emanating from the Occator crater on the surface of the dwarf planet as “bursts of energetic electrons” … yeah, the same thing that comes from a flashlight or any other artificial light source.  But they’ll be damned if they call it what it exactly appears to be in simple terms.

Galactic Sandbox is not advocating the idea that aliens are Morse-coding us from Ceres with Hollywood opening-premiere lights.  But it would be refreshing if NASA included in its many varied conclusions of this phenomena that it could possibly be made by something other than ice refraction, salt dunes, atmospheric swamp gas, or the latest “run up the flagpole and let’s see who salutes it” pitch:  bursts of energetic electrons possibly caused by the reflection of the Sun. 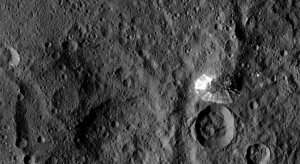 Still, the Dawn probe continues to find interesting wonders, such as a 4-mile high pyramid-shaped mountain – also in the Occator crater.  Because of the pyramid’s “strange and spooky” location, brace yourself for an onslaught of shrill cover-up hypotheses coming from the tin foil truthers (or false flaggers). 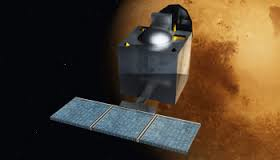 P e e r   P r e s s u r e
India’s scrappy space agency ISRO has joined a handful of other nations as it gazes deeper into the cosmos.  Last week ISRO took great pride in launching its “mini-Hubble” space telescope, called AstroSat, from Satish Dhawan Space Centre in Sriharikota (southern India).  It’s main focus will be on the super-massive black hole in the center of our Milky Way, but it will also eyeball pulsars, distant stars and white dwarfs.

Though the AstroSat is ten times smaller than the Hubble, it’s a big deal since it is the first space telescope ever made and launched by a developing nation.  The U.S., Russia, and Japan are the other (developed) nations that have space scopes out there. 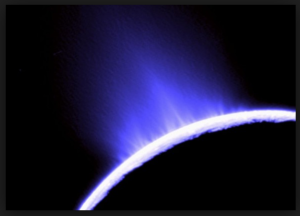 S e a  B r e e z e
Here’s something we’ve all known for a while, but NASA decided to “announce” it last week:  Saturn’s moon Enceladus has an ocean beneath its frozen crust!

Yet we can give credit to NASA and perhaps more fittingly, the marvelous Cassini spacecraft, for making it official.  The planetary scientists knew there was water there, but thought it was a regional sea.  It turns out to be an entire ocean on Enceladus, responsible for geysers erupting on the moon’s south pole. 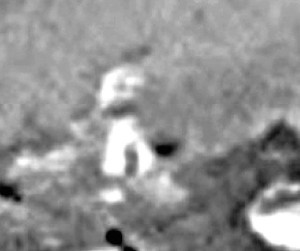 And now for the big finale this week.  I hate to do this to you, but it’s finally happened:  Elvis has been spotted on Mars, and yes, by the Curiosity rover.  We knew it was just a matter of time before famed tin foil hatter, Scott C. Waring (our much respected peer and publisher of the online UFO Sightings Daily), spotted the long dead warbler, not just in a black sequined jumpsuit suit but again in the sparkly signature white polyester affair for which he is so well-known.

The brutal irony of it all is that Waring did not even realize it was Elvis!  He merely reported it as the TENTH “humanoid figure” he caught from Curiosity’s cameras (he must have a 24-7 live stream from a Curiosity-cam, constantly humming along in his basement office), indeed the tenth that he has reported to NASA.

And yet, NASA has ignored him, time and time again.  Can you imagine?

I’m all shook up