In a rare bipartisanship move, the Senate last week passed the U.S. Commercial Space Launch Competitiveness Act, (a most Owellian misnomer if ever there were one) that will make mining asteroids for profit across the Solar System legal. 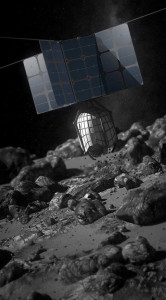 Dragonfly probe designed to retrieve and return to Earth material from asteroids.

Yes, we know that the United Nations Outer Space Treaty of 1967 bans nations from owning any property in space.  But believe me, folks, I come from a family of placer miners, and terms like claim-jumping and high-grading (stealing claimed minerals on the sly) are truly fighting words.  Miners have died over disputed claims, which includes being murdered…or perhaps even legally “dispatched.”  And I’m not talking about the 19th Century when Europeans moved westward over this nation. It still happens now, a gross example being the De Beers diamond cartel.

This proposed license to plunder allows bankrolled astro-miners who, with their space-age toys can whiz up to planets, dwarf planets, planetessimals, asteroids, or any other chunks of natural rock floating in space (or one should say zipping in space), and extract from said body everything and anything they want. 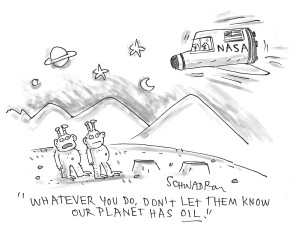 However, under the new law no one can actually own the celestial body they burrow – they would stake “mining claims” on it. Just how large the mining claim can be is not mentioned in any of this news.  Acres?  Hemispheres?  Seems like the sky is the limit.

Expected to pass the full Congress and then clear Obama’s pen, the law specifies that prospectors can mine for “abiotic” materials and elements, however – and I’m not making this up –  they cannot own any form of alien life they may find.  Yeah right.  Like any Eureka-screaming asteroid miner-forty-niner is going to tell anyone he found alien life.  I predict that illegal smuggling and slavery of such otherworldly entities becomes a cottage industry!

Predictably NASA, Republicans, and entrepreneurs (like Planetary Resources) are cheering the new Act as akin to the The Homestead Act of 1862…and wasn’t that a great deal for Native Americans?  Not.  Heads up ET!

Let me sum up by imparting the words of K.G. Orphanides of Wired:

“Handing out the right to exploit chunks of space to your citizens sounds very much like a claim of sovereignty, despite the Space Act’s direct statement that “the United States does not thereby assert sovereignty or sovereign or exclusive rights or jurisdiction over, or the ownership of, any celestial body.”

Dog Bless America!  Making friends across the world, and spreading out to infinity and beyond! 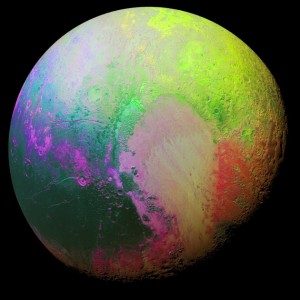 O u t t a  S i g h t
And now for something lovely.  NASA has taken one of the many pix snapped of Pluto by its New Horizons craft and put it through a technique called “principle component analysis” that highlights subtle color differences between the dwarf planet’s distinct regions.  The results are gorgeous and groovy.  It shows color boundaries of the two halves of Tombaugh Region (named after, of course, Pluto’s discoverer Clyde Tombaugh) also known as Pluto’s Heart – it’s the beige and pink region to the mid-right in the photograph. 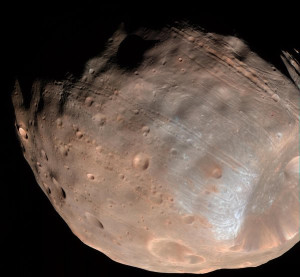 Fragile Phobos cracking at the seams.

E v e  o f  D e s t r u c t i o n
And now, more wreckage.  Apparently, Mars’ biggest moon, Phobos, is doomed.  Scientists at a recently-held planetary meeting say they expect the potato-shaped satellite to be pulled apart in a mere 30 to 50 million years. The first evidence of Phobos’ ultimate demise can be seen in the huge stretch marks running down the moon as it orbits Mars just 3,700 miles above the Red Planet’s surface.

At the annual meeting of the Division of Planetary Sciences of the American Astronomical Society, experts from NASA Goddard discussed how Phobos, which measures less than 17 miles across at its major axis, isn’t the most structurally sound celestial body in the Solar System. The fact that Phobos speeds around Mars much faster than the planet itself spins gives credence to the theory that the satellite could be fragilely hollow – or it could be a “rubble-pile” variety space rock, barely holding itself together.

There’s not any news on Mars’ smaller moon, Demos, but I bet it has a better chance of lasting in orbit longer than Phobos.

Well, perhaps Phobos’ eventual annihilation is all good news to the Russians.  They’ve lost dozens of spacecraft to Mars…whenever the craft get near the vicinity of Phobos.  It’s an eerie mystery that still pervades the suspicious minds of the Kremlin. 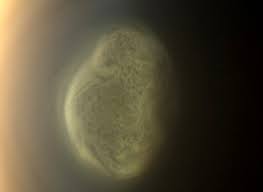 Titan’s cloud seems to be of low density, like a thick fog in the low-to-mid stratosphere, a stable region above the troposphere hovering 300 km above the moon’s frigid South Pole region. 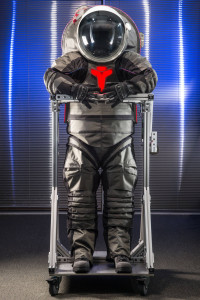 spacesuit that will hold up on our missions to Mars, NASA has decided to reveal the new images for the “Z-2” Mars spacesuit.

It looks a lot different from the white Moon suits that we are used to, and a lot more modern.  It was designed with just one purpose in mind:  “For maximum astronaut productivity on a planetary surface – exploring, collecting samples, and maneuvering in and out of habitats and rovers,” NASA says.  It won’t be used on space walks in outer space or even onboard spacecraft.
The Z-2 uses advanced composites for light-weight maneuverability and high durability for the harsh conditions of the Red Planet.

Naturally, it will be a while before NASA brains finagle the suit to shield radiation.  At least they still have two and half decades to figure that out. 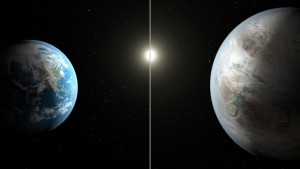 Scientists will soon have a new fabulous invention that is going to find Earth-like planets as fast as you can go outside and count dirt clods.

NASA has begun developing a new instrument called the Visible Nulling Coronagraph (or VNC) that couples a light-measuring interferometer device and a long-range telescope capable of looking in the direction of stars through a powerful light filter.

This invention will be able to provide broader spectral analysis, a crucial part in determining

a planet’s atmospheric make-up and potential for hosting life.

Let’s hope the candidate planets found are far, far out of range from the clutches of greedy speculators with picks and shovels.

B i g  B a n g  J r .
You’ll loooove this next one, but be warned: it probably may only be found in a one-inch column buried in the back of your local fish wrap’s sports section. 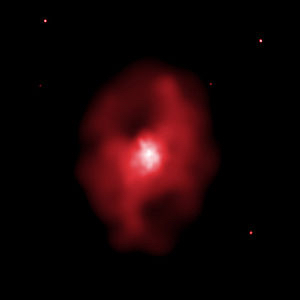 Oh, it’s just a tiny ditty of a trivial story:  “The Biggest Explosion since the Big Bang Is Happening in Outer Space Right Now.”

WTF???? They gotta be kidding.  And in fact, I thought it was a big hoax, maybe something that the good old Onion satire publication came up with.  But no, it’s for real.  And guess where I found it.  Food World News, of all insane places.     The photo was taken by NASA’s Chandra X-Ray Telescope and it is being hailed as the largest detonation since the Big Bang.  (Hmmmm.  What about the other bangs?  Ah well, that’s another story….)

This galactic burst came from a supermassive black hole located in the galaxy cluster known to its friends as MS 0735.6+7421.  Because of the time it took the light to get here, it actually happened 10 years ago, but the blast was the equivalent of over a trillion suns exploding – all in the same place at the same time.  The NASA scientists say the supermassive black hole gorged on matter equal to 300 million suns, which apparently caused one hell of a bellyache.  They say it was such a massive eruption that gas was being pushed away from ground zero millions of light years away.  Now some of the remnants are being transformed into energy.

M a j o r  S i n k h o l e
And now for the finishing flourish, the wild plastic cherry atop what could be the fate of this country. 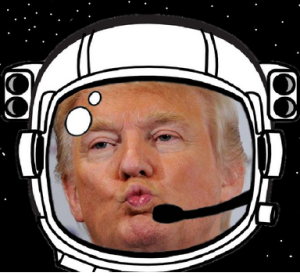 Last Wednesday, front-running Republican presidential candidate Donald Trump made a campaign stop in New Hampshire, and since he was simply mouthing the same old twaddle as usual, the attendees started asking questions.  One of the most intelligent ones posed was a space-loving 10-year-old boy’s query, “What do you think of NASA?”

“I love NASA, space is terrific!” quipped The Donald.

And then the big fat caveat: “Right now we have bigger problems – you understand that?  We have to fix our potholes.”

This great pearl of wisdom comes from the xenophobe who will save America by building a katrillion-dollar 3,000-mile long impervious wall along our continental southern border to keep out all those stooping laborers who pick our food and clean our houses (and probably fix our potholes).  While the politicians allot less than .0001 percent of the gross national budget to NASA, the real waste is in all the tax breaks uber-rich guys like Donald Trump and his Welfare Queen pals get.

Now I ask: Where’s a supermassive black hole when you need one?